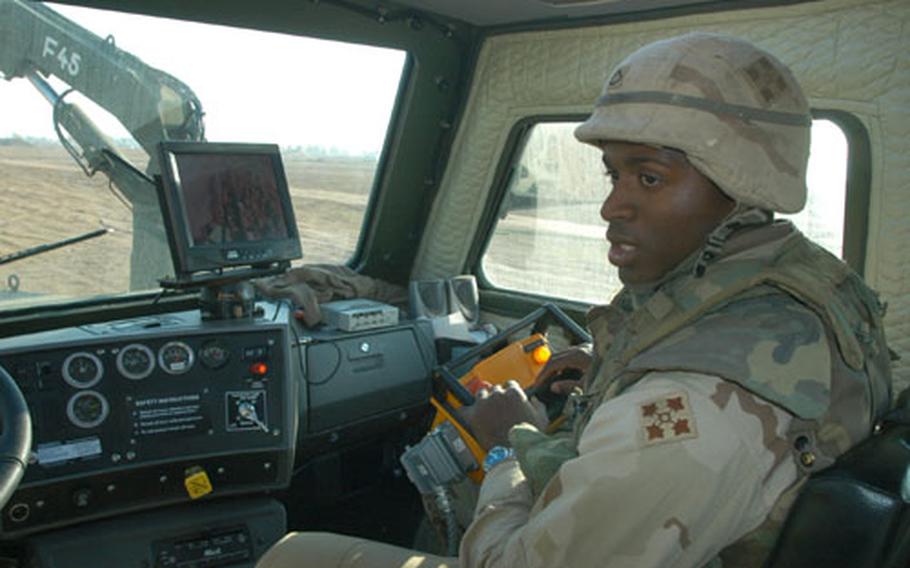 Pfc. William Stribling, 19, of Brooklyn, N.Y., operates the remote control arm on a Buffalo, the Army&#39;s latest equipment to counter the threat of roadside bombs in Iraq. (Rick Scavetta / S&S)

Pfc. William Stribling, 19, of Brooklyn, N.Y., operates the remote control arm on a Buffalo, the Army&#39;s latest equipment to counter the threat of roadside bombs in Iraq. (Rick Scavetta / S&S) The Meerkat, a South African-designed mine detection vehicle, is used by U.S. Army engineers in Iraq to sweep for roadside bombs along convoy routes. (Rick Scavetta / S&S) A Buffalo crew uses a remote control arm to search for improvised explosive devices on Highway 1 south of Samarra, Iraq, as a supply convoy passes by. (Rick Scavetta / S&S)

BALAD, Iraq &#8212; Using recently fielded mine detection vehicles, soldiers from Company C, 489th Engineer Battalion are hunting roadside bombs similar to those that have killed and maimed dozens of U.S. troops in Iraq over the past six months.

Equipped with South African-designed vehicles &#8212; the Meerkat and the Buffalo &#8212; the Arkansas-based Army Reserve troops have taken an Army side project to the forefront in the military&#8217;s efforts to counter the threat of improvised explosive devices, or IEDs.

Insurgents aiming to demoralize the U.S.-led coalition often stage ambushes with crude explosives hidden among debris along convoy routes or buried near roads.

The platoon of combat engineers, who had been working odd jobs in Kuwait, are now sweeping major convoy routes in central Iraq to clear highway shoulders and medians.

An ink jet marks the spot. Soldiers in the heavily armored Buffalo pry suspicious objects from the ground with a remote-controlled fork. Sappers &#8212; engineers trained in explosives &#8212; can then demolish the device.

Both vehicles are designed to protect soldiers from a blast, said Sgt. 1st Class Ed Fletcher, an Oklahoma native supervising the operation.

In June, civilian contractor Shon Craig, 50, of Manassas, Va., arrived in Iraq with the $1.5 million Interim Vehicle Mounted Mine Detection System, a package of several mine-detecting vehicles that the military has kept for five years, Craig said. The equipment, based on South African anti-mine technology, saw action last March at the U.S. airfield in Bagram, Afghanistan, he said.

At first, the Army in Iraq was not interested in manning or field-testing the new equipment, Craig said. The mine threat was minimal, and units were busy changing from combat to occupation duties, he said.

But for six weeks, South African trainers taught Fletcher&#8217;s platoon about the equipment from the inside out. Then soldiers translated the schooling into Army tactics. And there were no mine-clearing missions.

On an early mission, the crew stumbled upon an IED half-buried in a foxhole.

His soldiers fanned into a security perimeter and traced the wire&#8217;s end; thankfully, no enemy was attached, Fletcher said.

During that time, he found IEDs and other unexploded munitions. Years of video games prepared him to maneuver the Buffalo&#8217;s mechanical arm using only a small display screen to watch the nine-pronged fork scrape into the dirt.

The Buffalo&#8217;s long arm jabs into the crusty roadside. Watching a screen on the dashboard, the operator uses the arm&#8217;s camera to pluck out objects.

Much of the time, they find debris.

At times, locals will point out potential bomb sights, for fear that an attack could harm their children, Lipe said.

Now, the team is sharing their experiences with fellow soldiers, as the company trains other units to use the gear.

Savre, 43, of Edina, Minn., recommended that the Army supply one system to each division in Iraq. Three weeks after filing the request, a half-dozen more sets were shipped out, Savre said.

Both the Fallujah-based 82nd Airborne Division and the 4th Infantry Division in Tikrit sent troops to Balad to train for clearing missions in their sectors. Another team recently deployed to southern Iraq to begin work there.