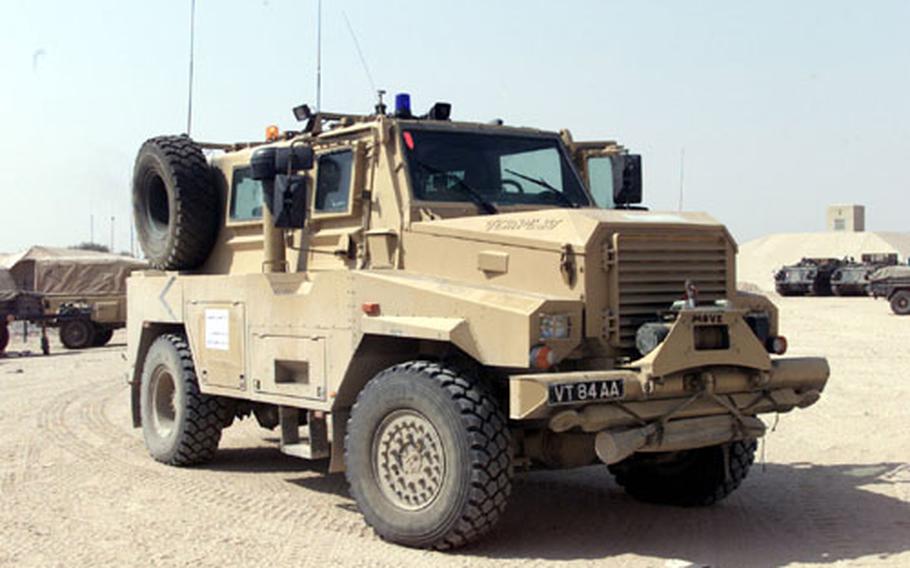 The U.S. Marine Corps will ship to Iraq by this fall 14 new anti-mine type vehicles, called the Cougar, that can be used to protect its Explosive Ordnance Disposal teams and combat engineers from Improvised Explosive Devices, or IEDs, which have claimed dozens of U.S. servicemembers’ lives in the past year. (Courtesy of Force Protection Inc.)

ARLINGTON, Va. &#8212; Marines in Iraq will be getting a new batch of vehicles late this fall that will help protect them against improvised explosive devices, or IEDs, the roadside bombs that have killed and maimed dozens of troops in Iraq over the past year.

The first 14 Cougars, which the Corps will rename Hardened Engineer Vehicle, are slated to go to combat engineers and explosive ordnance disposal teams now in Iraq, arriving in country before Thanksgiving, said Jeff Child, spokesman with the Columbia, S.C.-based Force Protection Inc., which manufactures ballistic and mine protected vehicles through its wholly owned subsidiary Technical Solutions Group.

The Corps bought the vehicles under an expedited &#8220;urgent requirement&#8221; process because of a great need to protect Marines from the threat of IEDs, said Joe Murgo, team leader for the Corps&#8217; Engineer support Equipment and Counter IED systems branch at Marine Corps Base Quantico, Va.

&#8220;We needed a vehicle designed to specifically take mine blasts from the ground up, to give all-around protection &#8230; and something that is easily maneuverable,&#8221; Murgo said. Tanks and tracked vehicles proved too large and cumbersome for some of the EOD and engineers&#8217; missions, he said.

&#8220;The vehicle is designed, with its V-shaped hull, to withstand both AP and AT (anti-personnel and anti-tank) blasts and can protect Marines against IEDs, small arms fire, air bursts, and fragments from [weapons] 155 mm and below,&#8221; Murgo said.

The Cougar, with an average price of $335,000, is a multipurpose vehicle with a capsule designed to protect the driver and crew from both ballistic and mine blasts. According to the manufacturer&#8217;s Web site, the vehicle can be configured to serve as a mine-protected troop transport vehicle, a weapons platform, a law enforcement special response vehicle, or an EOD/range clearance vehicle.

The Cougar and its sister vehicle, the Tempest, are available in 10-seat versions in the 4-by-2 and 4-by-4 models, and as a 16-seater in the 6-by-6 model, though the Marine Corps did not buy any 4-by-2 models, Child said.

Some of the five-man teams of EOD Marines will get the smaller 4-by-4 versions, while some engineer support battalion Marines will get the longer 6x6 vehicles to help carry their personnel and equipment, Murgo said. But because of the vehicles&#8217; versatility, they can be used however ground commanders see fit, he said.