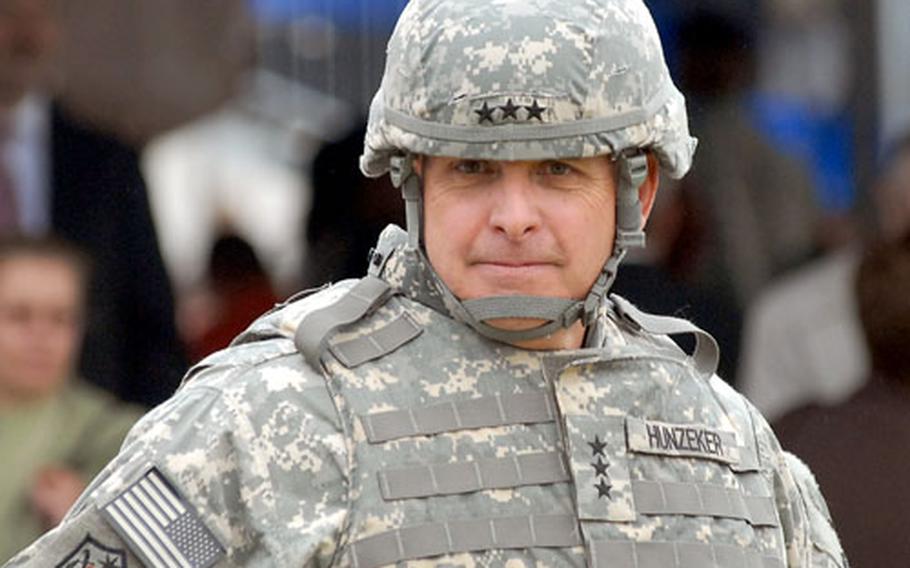 BAUMHOLDER, Germany &#8212; It was something of a homecoming for Lt. Gen. Kenneth W. Hunzeker, the new V Corps commander, who has been on the job fewer than 40 days and is amid a whirlwind tour of Army installations.

Hunzeker, who 10 years ago served as commander of Division Artillery in Baumholder, returned to his old post Friday to consult with local commanders and get an close look at the operation of the 2nd Brigade, 1st Armored Division.

&#8220;You can do a map reconnaissance, but the personal reconnaissance is always much better,&#8221; Hunzeker said following meetings with Army leaders in Baumholder.

&#8220;I think the most refreshing thing I&#8217;ve seen is the nesting for what we the operational commanders on the ground need and what the garrisons are doing to support those efforts, especially here in Baumholder. They&#8217;re all on the same sheet of music.&#8221;

It&#8217;s not always easy to balance competing needs when resources and dollars are scare, he said. But &#8220;[U.S. Army Europe], V Corps and all the footprint over in Europe have really been the leaders across the entire Army in terms of doing that,&#8221; Hunzeker said.

Hunzeker, who succeeded Lt. Gen. James D. Thurman last month as commander, will be leading V Corps through rapid transformation in the next couple of years. As part of the plan to establish a more efficient and fast-moving Army, V Corps and USAREUR will merge to become the 7th Army.

The merger should be complete around July 2009, Hunzeker said.

Hunzeker, who commanded the 1st Infantry Division during its return to the United States, spent the past year in Iraq overseeing the development of the Iraqi police.

When asked about President Bush&#8217;s plan to downsize force levels by more than 20,000 and turn over more patrol responsibilities to Iraqis, Hunzeker responded by talking about the recent successes in Anbar province.

During Hunzeker&#8217;s time in Iraq, the police force grew from 7,000 to about 20,000, he said. Those successes were tied to Iraqis standing up against al-Qaida in Anbar, he added.

&#8220;What took place in al-Anbar in the last year is exceptionally significant and it is significant because it was an awakening from the Iraqi side that they were going to take al-Qaida out in al-Anbar,&#8221; he said.

&#8220;We couldn&#8217;t get people to sign up for the police when I first got there. Our goal was to get 11,000 or 12,000 and we were woefully behind that. We eclipsed that when this Awakening took place,&#8221; Hunzeker said, referring to the Anbar Awakening, an alliance against al-Qaida in Iraq.

As for the fate of the Army&#8217;s installation at Baumholder and whether it will be granted enduring status and remain operational, Hunzeker said: &#8220;We have a plan &#8230; And I think there&#8217;s decisions that will be made in the future.