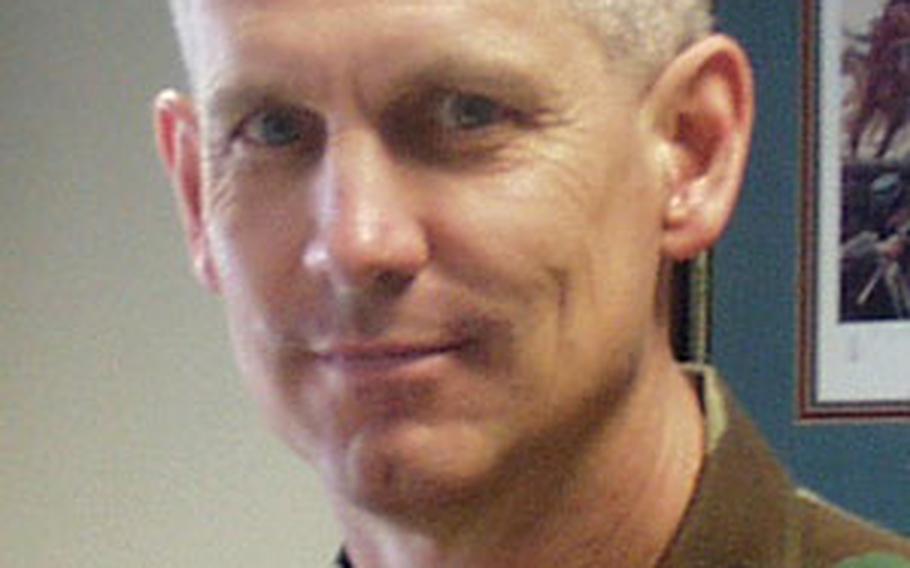 He favors the fancy, multistrapped boots of the tanker, which he&#8217;s worn since he was a captain. He&#8217;s surpassed the career achievement of his father and father-in-law, who both retired as colonels, but says it&#8217;s his 16-year-old daughter who is practically perfect.

For a man who describes his new job as &#8220;behind the scenes,&#8221; the frocking ceremony of Brig. Gen. Don Campbell on Thursday was one in which V Corps troops could learn a surprising amount about their new chief of staff.

&#8220;A great soldier, warrior and father,&#8221; is how the V Corps commander, Lt. Gen. Ricardo Sanchez, described him, before helping rip the eagles off Campbell&#8217;s collar and placing in their stead the brigadier general&#8217;s star.

Campbell, 49, arrived in Heidelberg in June from his last posting at the U.S. Army Recruiting Command in Fort Knox, Ky. Soon after, he spent three weeks training in Grafenw&#246;hr to take V Corps Headquarters to Iraq.

Who&#8217;ll be leading the V Corps effort, though, remains unclear. Sanchez has now been V Corps commander for more than two years, and he lead Iraq ground operations in 2003 through 2004. There&#8217;s been no word on any command changes.

Campbell says that among the chief functions of the corps headquarters will be to help train Iraqi security forces to fight the counterinsurgency so that eventually U.S. troops can leave.

It will be Campbell&#8217;s second tour in Iraq. In 2003, he was with the 4th Infantry Division, where he worked first as a brigade commander and then as division chief of staff. It was the first time 4th ID had seen combat since the Vietnam War, he said, and when he first got to Iraq, two months passed before he was able to even talk to his family.

At his frocking ceremony, which is the practice of pinning on a higher rank before the actual promotion date, he thanked the generals and sergeants he&#8217;d served with for helping teach him duty, respect, leadership and commitment to soldiers.

But most of all, he thanked his family.