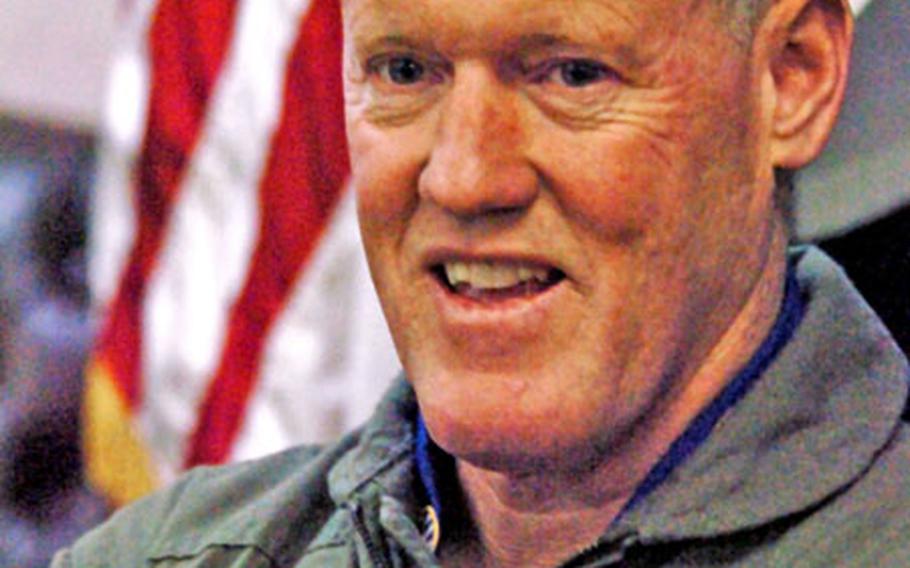 Lt. Gen. Bruce A. Wright, the new commander of U.S. Forces Japan, says past tours on Misawa and Kadena air bases have helped prepare him to work closely with the Japanese government and local officials. (Jim Schulz / S&S)

YOKOTA AIR BASE, Japan &#8212; On his first full day as commander of U.S. Forces Japan, the top news item of the day exemplified some of the challenges Lt. Gen. Bruce A. Wright will face in his tenure as the top U.S. military official in Japan.

North Korea acknowledged publicly for the first time that it has nuclear weapons.

As commander of USFJ, and the 5th Air Force, Wright must balance the military and social challenges of any commander; but with it he must also handle the geopolitical and diplomatic concerns in the region.

Wright also takes the helm during one of the most tumultuous times in modern U.S.-Japanese relations, as the two countries discuss potentially sweeping changes to the U.S. force posture in Japan.

Simultaneously, Japan is assisting in global events, including in Iraq, in unprecedented ways.

But past tours at Misawa and Kadena air bases, as well as with USFJ, have prepared him, he said.

His focus, he said, will be on continuing positive U.S.-Japanese relations, ensuring U.S. military readiness and supporting the servicemembers and families he commands.

USFJ includes more than 113,000 servicemembers, families and civilian employees based throughout Japan.

&#8220;First and foremost, I&#8217;m committed to being the best possible leader and boss for [servicemembers] and families in U.S. Forces Japan,&#8221; he said. &#8220;It&#8217;s my job to ensure that the military members and their families stationed in Japan have the best possible facilities like schools and [exchanges], and that we take care of those families.&#8221;

Wright said he can appreciate the challenges of being stationed overseas after having served tours in both Europe and Japan. With those challenges, he added, come great rewards.

Among his goals as commander, he said, will be encouraging recreation and enjoying Japan, along with promoting safety.

&#8220;Our safety programs have to be the best we can make them. It&#8217;s a tragedy when any military or family member dies in an accident. We&#8217;ve proven over the years that our goal of zero fatalities is achievable,&#8221; he said. However, it is the people on the ground who can make the most difference.

Wright said another of his objectives as commander will be promoting readiness.

&#8220;No. 2 on my list, but not necessarily by priority, is 24-by-7, best-possible joint and bilateral combat readiness and unwavering commitment to the highest levels of military professionalism. That is what we do and that is who we are.&#8221;

Meeting those objectives &#8212; supporting people and promoting readiness and professionalism &#8212; will help support the U.S. alliance with Japan: the most important alliance the United States has, he said.

&#8220;At this point in its history, the U.S.-Japan alliance is contributing to East Asian stability, from humanitarian assistance in tsunami-stricken regions in Asia, to support for Iraqi and Afghani men, women and children,&#8221; he said.

Wright added that one of his challenges as commander will be maintaining the engagement with Japanese forces and staying as informed as possible to offer the greatest support to Pacific Command.