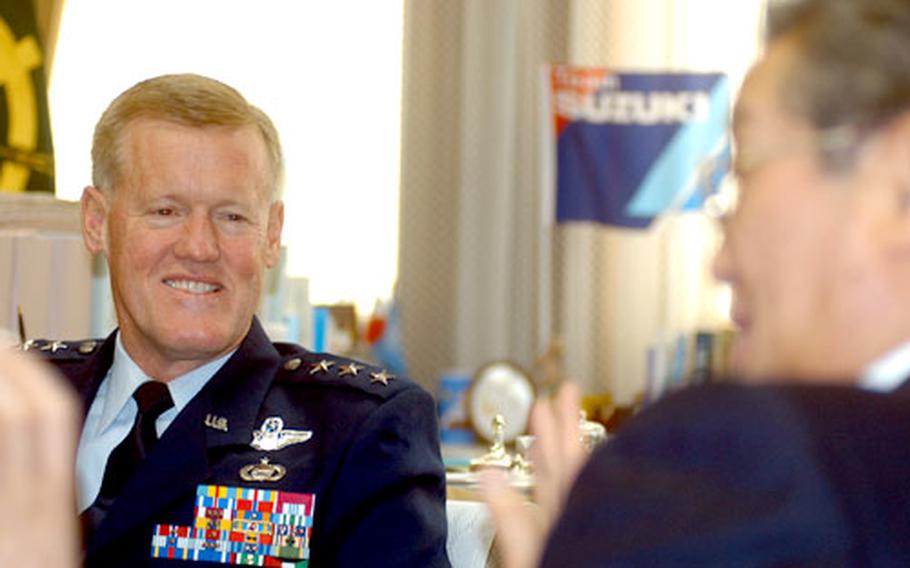 MISAWA, Japan &#8212; The ties forged by a mayor and wing commander more than seven years ago in remote northern Japan may turn out to be one of the more significant relationships in the current dynamics of the U.S.-Japan alliance.

Misawa City Mayor Shigeyoshi Suzuki and Lt. Gen. Bruce A. Wright first met in 1997, when the then-colonel, who was promoted to brigadier general during his Misawa tenure, took the helm of the 35th Fighter Wing.

Just days into his new job as U.S. Forces Japan commander, Wright made a point of visiting Suzuki during a brief swing through Misawa on Monday.

The old friends needed little time to get reacquainted. After a hero&#8217;s welcome outside the city office &#8212; employees stood sans coats on a bitter cold afternoon to greet Wright with handshakes and bows &#8212; the three-star general drank green tea in Suzuki&#8217;s office and talked about sushi, golf and shared memories from Wright&#8217;s old job. Joining the meeting was Brig. Gen. Bill Rew, the current 35th Fighter Wing and Misawa base commander.

Wright thanked Suzuki and his dedicated staff &#8220;for the impact you had on our lives, for being part of our family. You really have been a wonderful sensei,&#8221; he said.

In the years since leaving Misawa and serving stints at the Pentagon and Air Combat Command, Wright said he has realized even more how special and significant the relationship is between the city and the base.

Now that Wright will be dealing with many mayors, he hopes to build similar ties with cities across Japan that host U.S. forces.

Wright said he plans to visit mayors from Atsugi to Iwakuni.

&#8220;That will be a real gift to this assignment, to get to know more mayors,&#8221; he said, noting that he hopes to further strengthen the U.S.-Japan alliance using Misawa as a model.

Suzuki seemed genuinely pleased to see Wright; during their meeting, the mayor pointed to a cowboy hat displayed in the corner that Wright had given him during the base&#8217;s American Day celebration.

Wright said the importance of the U.S.-Japan alliance &#8220;makes it very smart for the Air Force, our government, to bring people back. It&#8217;s a very challenging part of the world. It&#8217;s important for us to be prepared and trained and have the experience.&#8221;