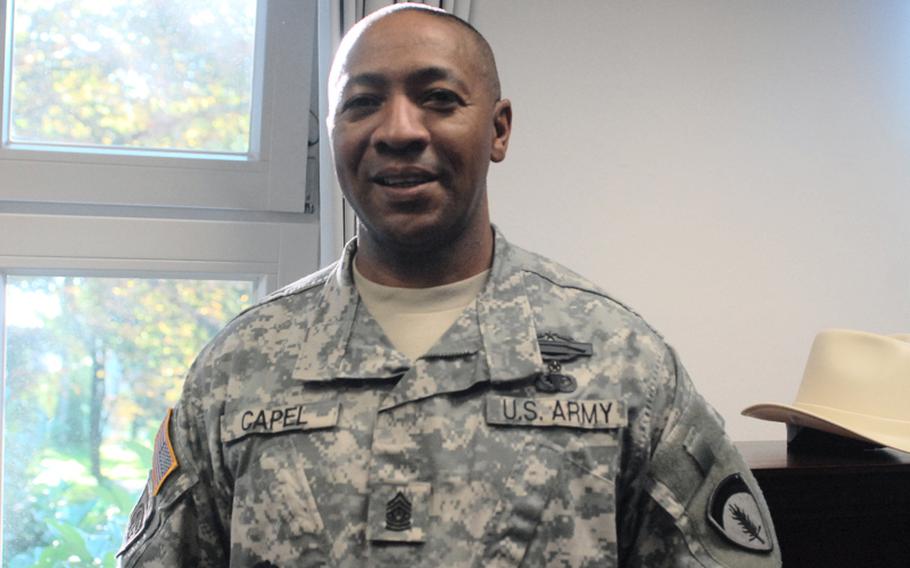 U.S. Army Europe Command Sgt. Maj. Thomas Capel arrived recently in Heidelberg - from previous tours in Iraq and Afghanistan and years with the 82nd Airborne - to be USAREUR's 16th command sergeant major. He said he will assess what the command's enlisted soldiers need now and in the future in garrison, and will also focus on discipline and standards. (Nancy Montgomery/Stars and Strip)

&ldquo;I can tell, when a unit gets off the back of a C-17, the way they carry their weapons, the way they get into formation, if they are well disciplined,&rdquo; said Command Sgt. Maj. Thomas Capel, who will be welcomed to USAREUR during a ceremony Wednesday.

&ldquo;I think discipline has to be taught back here in garrison,&rdquo; he said.

In fact, a Pentagon task force looking into reasons for the significant increase in the number of soldier suicides in the past few years faulted lax garrison attitudes to policies, discipline and accountability. Those attitudes resulted Army-wide in a variety of risky behaviors: alcohol and drug abuse, crimes and suicide.

One result of being at war, he said, was an NCO cadre with less training than in the past.

The NCO Academy used to be a four-week course, Capel said. But continual deployments has led to a backlog of new sergeants waiting to attend their warrior leadership course.

The Army solution, to get more sergeants through the training, was to decrease the length of the training. Now the NCO Academy lasts only 18 days. &ldquo;And the other side of the coin &ndash; what is the focus of the soldier today? To fight, win and survive. That&rsquo;s what they&rsquo;re taught in the course.&rdquo;

Capel, 51, can understand, if not condone, lapses in discipline in difficult combat circumstances.

Three years ago, a sergeant first class in his command was convicted of the 2003 abuse of an Iraqi detainee.

Then 82nd Airborne Division command sergeant major, Capel spoke at the sergeant&rsquo;s court-martial: &ldquo;He was a role model. He was a motivator,&rdquo; Capel was quoted in a newspaper story about the case. &ldquo;I&rsquo;d take him back with me now.&rdquo;

But what the newspaper didn&rsquo;t explain, Capel said, was that the detainee had been involved in killing the sergeant&rsquo;s best friend and platoon leader only hours before he was placed in custody. The Iraqi&rsquo;s injuries were minor, he said.

And, Capel said, when he said he&rsquo;d take the sergeant back, he had also said, &ldquo;I&rsquo;d take him to educate other soldiers on what not to do.&rsquo; &rdquo;

Capel has been putting his stamp on issues affecting soldiers for decades. He has spent most of his 33-year career with the 82nd Airborne Division at Fort Bragg, N.C., and part of that time with the division readiness force tasked with parachuting into hostile territory 18 hours after being notified. &ldquo;It was pretty high-tempo,&rdquo; Capel said.

He loved it, and the Army, although his first wife did not. Capel subsequently married a fellow soldier &ndash; the two courted on an earlier Germany tour &ndash; who is now a retired sergeant major.

Capel still reveres as role models his drill sergeants, who made him do extra physical training throughout eight weeks of basic training after a disagreement during a first-day roll call on how his last name was pronounced. Capel, it turned out, had been mispronouncing his own name.

&ldquo;They got me straight right away,&rdquo; said Capel, who answered to &ldquo;CAPE-ell&rdquo; until basic training, and &ldquo;C&rsquo;pell&rdquo; ever since.

And one time, he took his teen-agers to the Army recruiters and dropped them off. He told them to come home after they&rsquo;d done something with their lives. They came home the same day.

&ldquo;They called their mom,&rdquo; he said.