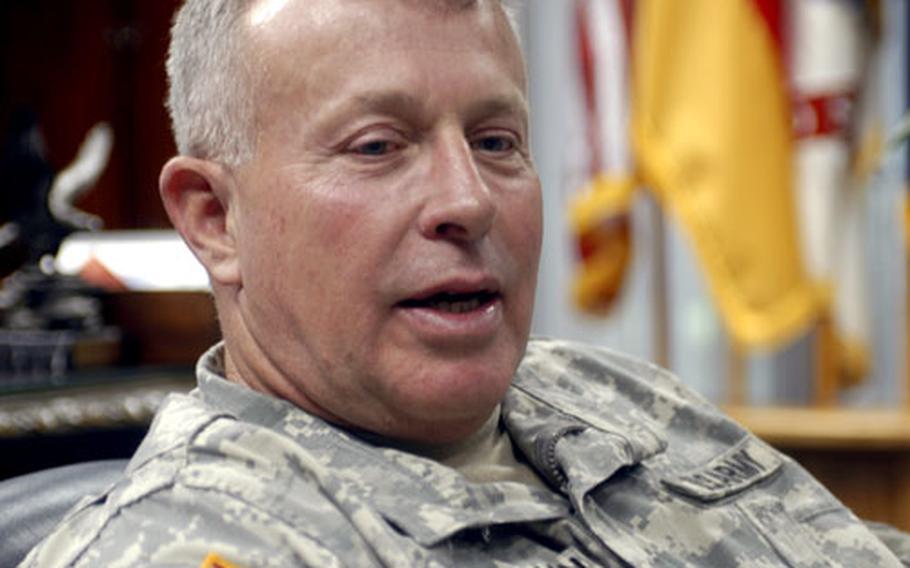 Gen. David McKiernan, commander of U.S. Army Europe, said he wants to ensure that as Army troops draw down from Europe neither military capability nor services for soldiers and families decrease. (Nancy Montgomery / S&S)

Gen. David McKiernan&#8217;s first community visit wasn&#8217;t to Grafenw&#246;hr, Vilseck or any of the places destined to showcase U.S. military might in Europe.

The new commander of U.S. Army Europe went instead to Friedberg, a community where the U.S. presence is about to dwindle, then vanish altogether.

McKiernan visited Friedberg, set to close in the next couple of years as part of Army transformation, because he wants to make sure the lights stay on until soldiers and families are gone.

&#8220;There are some places where I worry we really have to guard against that,&#8221; McKiernan said in an interview last week during which he discussed his objectives for the next few years. &#8220;All of a sudden, people want to turn out the lights.&#8221;

McKiernan&#8217;s attention was timely and welcome. It turned out that the Friedberg commissary hours had already been cut and families weren&#8217;t happy. That changed.

He also intends to establish the expeditionary stance to threats, to build coalitions with other nations, and, in keeping with his stated belief that people are more key to success than the most lethal equipment or canniest doctrine, build Army leadership.

But for McKiernan, who lived in Heidelberg as a child, married a German-born woman and served five tours in Europe, including when there were 300,000 U.S. soldiers stationed here, keeping Europe an attractive duty station is very important.

That&#8217;s one reason he felt so strongly that the Army should not terminate hundreds of temporary workers on U.S. bases in Europe, as it planned to do to save money. Most of the temps are soldiers&#8217; wives, who, unlike counterparts in the U.S., did not have other job options. McKiernan stepped in, got on the phone and called the Pentagon.

The Europe temps kept their jobs.

But he also said, &#8220;We have to be careful about being tempted to pull out too much capability. It might be cheaper &#8230; but you&#8217;ve got to have the right presence over here. The challenge is that we not take too much capability out of Europe and put it back in the U.S.&#8221;

McKiernan is not a unilateralist. Since he took command of USAREUR in December, he&#8217;s spent a lot of time building ties with Air Force and Navy commanders, he said, as well as with generals from NATO countries and Russia. But, he added, even with plans for the U.S. to establish Spartan bases in eastern Europe, &#8220;old Europe,&#8221; as Defense Secretary Donald Rumsfeld called it, shouldn&#8217;t be neglected.

&#8220;The temptation is to start working with a lot of the newer NATO members &#8212; Poland, Rumania, Bulgaria &#8212; but our traditional and greatest historical allies are countries like Great Britain, Germany, Italy and France,&#8221; he said. &#8220;We have to keep that in balance.