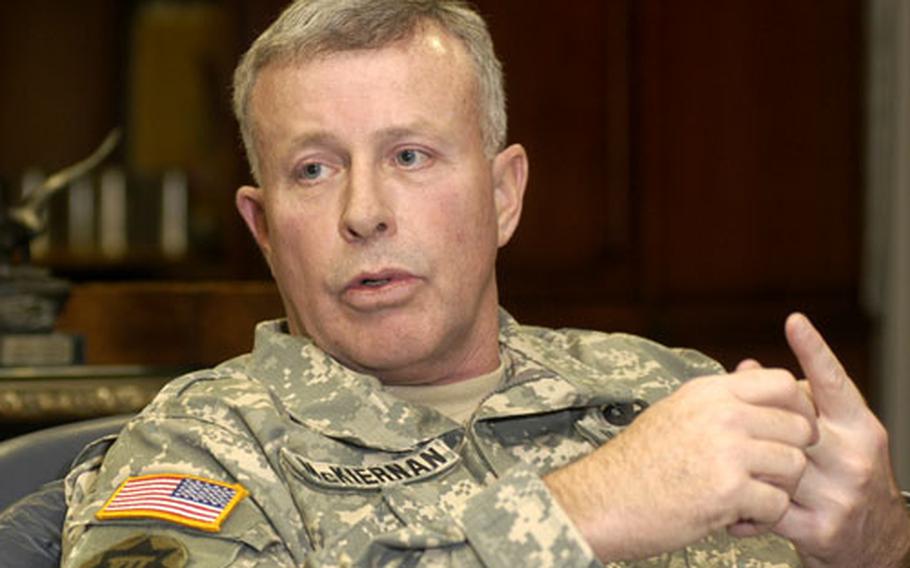 But Gen. David McKiernan, U.S. Army Europe commander, shares at least two things with Jon Stewart of &#8220;The Daily Show.&#8221; Both are graduates of the College of William & Mary, the second-oldest university in the United States &#8212; the institution where George Washington got his surveyor&#8217;s certificate and Glenn Close graduated Phi Beta Kappa &#8212; both received honorary doctorates years later in recognition of their adult accomplishments.

McKiernan became U.S. Army Europe commander last month, his latest appointment in what&#8217;s been not only a highly successful career, but also at times a highly visible one. In 2003, McKiernan commanded the ground troops invading Iraq and made it to Baghdad in 16 days. After he got there, McKiernan was the first U.S. commander to work to stabilize and pacify Iraq, and was the subject of scores of media interviews.

In the next month or two, McKiernan will be traveling throughout the realm of U.S. Army Europe, meeting with commanders, troops and officials from a variety of European countries to assess how things stand and where they should go.

Europe has some of the best of the military&#8217;s programs for soldiers and families, McKiernan said. &#8220;I want to make sure we build on that. The schools are going to be good. The housing is going to be good.&#8221;

Transformation efforts will continue apace, he said, as will deployments to Afghanistan and Iraq. &#8220;The U.S. is at war. &#8230; Is the Army stretched and stressed? Yes. That, in my mind, is what the global war on terror does.&#8221;

His new job marks the fifth time McKiernan, who, as the son of an Army officer, spent years in Germany and chose his wife from among its citizens, has been posted to Europe.

His experiences have also made him a big fan of joint, inter-military, multicountry, cooperative actions. &#8220;There&#8217;s a lot of synergy in joint work,&#8221; he said.