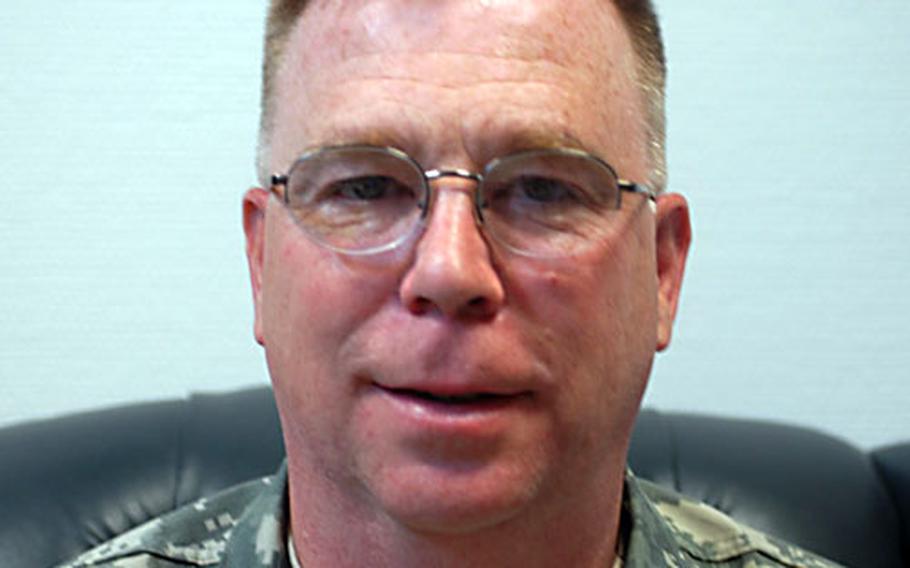 Col. Donald Rutherford, new U.S. Army Europe chaplain, says chaplains should be out with the troops, not cloistered in offices and churches. (Nancy Montgomery / S&S)

Ask Col. Donald Rutherford to tell you about his mother.

Her maiden name was Maguire, she was widowed early and reared four sons who grew up to make her just about the proudest Irishwoman around in their little upstate New York town.

In fact, Rutherford, the new U.S. Army Europe chaplain, who arrived earlier this month after a year in Iraq, said he thinks of himself as a priest first and a soldier second. And the two never conflict, he said. &#8220;You&#8217;re taking care of soldiers and their families &#8212; people who are very much in need,&#8221; he said.

Rutherford, 50, has been a priest half his life. He joined ROTC in college, and had been teaching biology in a parish high school for nine years while in the Army Reserve.

Rutherford said yes. His bishop told him he could stay away three years. That was 16 years ago.

Rutherford served as Multi-National Corps-Iraq chaplain until January. He supervised nearly 300 &#8220;religious support teams&#8221; throughout the theater, trying to ensure that they were providing spiritual guidance and support to the troops.

It was not an easy job, he said.

He said he did not have statistics on the percentage of troops who attended religious services in Iraq, but that all services in every denomination were well-attended.

One of his fondest memories from Iraq was Easter Sunday in 2005, when it turned out there was an isolated base without a priest to celebrate Mass. Rutherford got on a Black Hawk and presided over Mass himself, then stayed a while to talk.

Chaplains, he said, are there to make life better for soldiers and their families. They must remain noncombatants at all times, even in places such as Iraq.