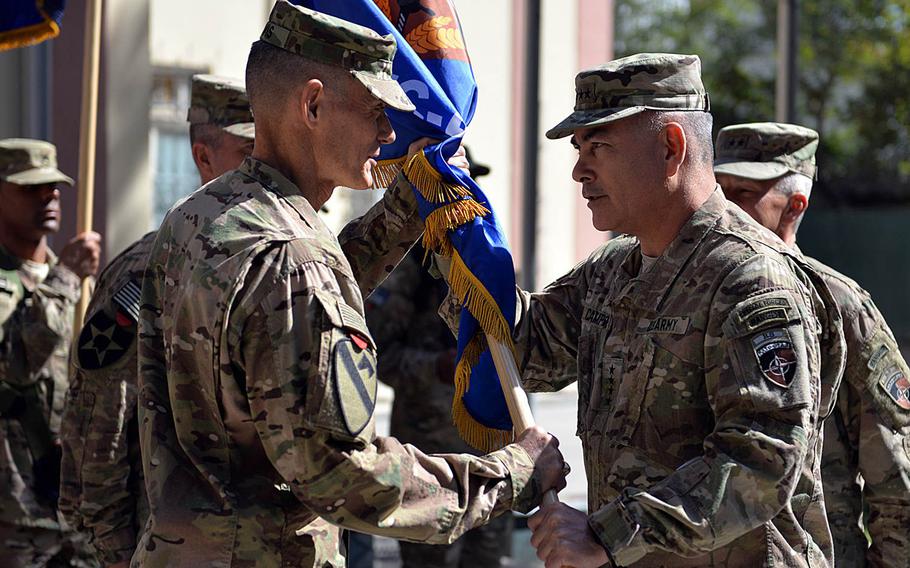 KABUL, Afghanistan — A new American general assumed leadership of the NATO-led coalition’s transition command on Thursday, amid new questions about the capabilities of the Afghan forces the coalition has been training.

Maj. Gen. Gordon Davis will now lead the Combined Security Transition Command–Afghanistan, which focuses mostly on issues like logistics, communications and budgeting. He took over from Maj. Gen. Todd Semonite, who wraps up a 13-month deployment that saw the declared end of the coalition’s combat mission at the end of 2014 and the beginning of the new, training-focused Resolute Support mission.

Casting a shadow over Thursday’s change of command ceremony at the Resolute Support headquarters in Kabul, however, was the ongoing battle for Kunduz in northern Afghanistan where NATO-backed Afghan troops were trying to recover after the Taliban seized a major city for the first time since they were ousted in 2001.

Afghan forces were routed from the city in a matter of hours on Monday, and have since struggled to regain control, with American forces stepping in with airstrikes and special operations advisers on the ground.

But coalition leaders at the ceremony focused on what they see as progress by the security forces and the government.

“You have made phenomenal progress in budgetary programming, pay, personnel and force structure systems ... improving accountability while finding savings in the budget,” Semonite told Afghan officers at the ceremony, according to a statement released by the coalition.

While acknowledging continued threats, Semonite argued that Afghanistan is “well-postured for continued stability and long-term sustainability,” the statement said.

Despite the ongoing bloodshed in the country, Semonite said he hopes the legacy of the coalition training programs “will not be guns and ammo, but systems and processes.”