New US drone site to extend reach in Africa 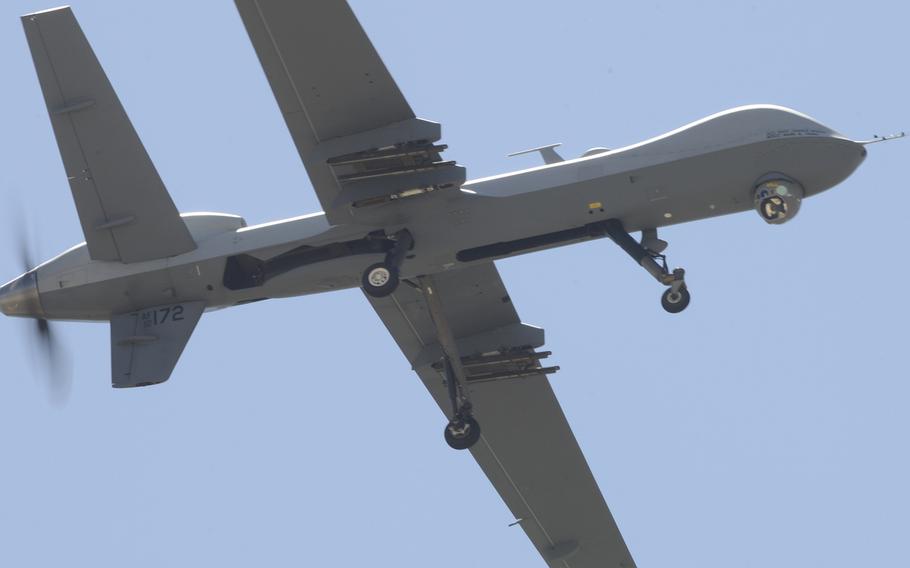 An MQ-9 Reaper performs a low pass during a first-ever air show demonstration at Cannon Air Force Base, N.M., on May 28, 2016. U.S. Africa Command is expected to soon conduct surveillance operations at a new outpost in Niger, which is the only country in western Africa that has agreed to host MQ-9 Reapers. ()

STUTTGART, Germany — A new base under construction in Niger could be capable of hosting armed U.S. drones, a sign that a counterterrorism mission in western Africa, focused until now on surveillance, has the potential to turn lethal, according to a news report.

The military is building a new site to host U.S. unmanned aircraft in Agadez, Niger, a strategic outpost that also puts Libya in the sights of long-range MQ-9 Reaper drones, according to The Intercept, an investigative news site.

The government of Niger, the only western Africa country to allow MQ-9 Reapers, will allow for armed drone flights, The Intercept reported, citing a previously classified U.S. document.

For several years, the U.S. has been conducting remotely piloted surveillance out of Niger, a launching pad for reconnaissance on Islamic militant groups operating in Nigeria, Mali and elsewhere. Those operations have been based in Niamey, Niger’s capital, but will shift to Agadez.

So far, there have been no reports of offensive airstrikes by the U.S. in the region.

U.S. Africa Command declined to say whether it intended to conduct armed drone flights in the future out of Agadez, where the U.S. base is expected to open next year.

“The types of aircraft operating from Agadez will depend on available assets, the regional requirements of our host nations, and the requirements to meet mutual security goals,” Samantha Reho, an AFRICOM spokeswoman, said in an email. “The arming of any aircraft, including remotely piloted aircraft, is done with the approval of and upon coordination with the Government of Niger.”

AFRICOM, citing operational security concerns, said it would not discuss specifics about military efforts or “speculate on potential future activities or operations.”

“The location in Agadez will improve U.S. Africa Command’s capability to facilitate intelligence sharing that better support Niger and other partner nations, such as Nigeria, Chad, Mali and neighbors in the region and will improve our capability to respond to regional security issues,” Reho said.

Instability in western Africa has been a growing concern for the United States. In Nigeria, Africa’s most populous country, the militant group Boko Haram has been blamed for the killing of more than 10,000 people in 2015 and ranks as possibly the world’s most deadly terrorist group. While Boko Haram has not demonstrated a capacity to target the West, it has launched attacks on neighboring Niger and Cameroon, where the U.S. also conducts surveillance flights using deployed personnel.

“Security threats in the region underscore the need to conduct continuous intelligence, surveillance and reconnaissance in West Africa and to share information with partners conducting operations in the region,” Reho said. “Due to the vast geography of Africa, Agadez is an ideal, central location to enable ISR collection to face the security threat across the Sahel and Lake Chad Basin region.”

In Africa, the U.S. military has become more overtly focused on counterterrorism operations in recent years. After years of operating in secret in Somalia, the U.S. now acknowledges that it has a small number of special operations forces in the country to assist local troops in their fight against the militant group Al-Shabab. In addition, U.S. airstrikes in support of Somali and U.S. troops on the ground have become more frequent.

Meanwhile, AFRICOM is routinely launching airstrikes against the Islamic State group in Libya, where for two months warplanes have been targeting militants in the coastal town of Sirte.