New US ambassador to S. Korea introduces himself, vows to maintain bond between allies 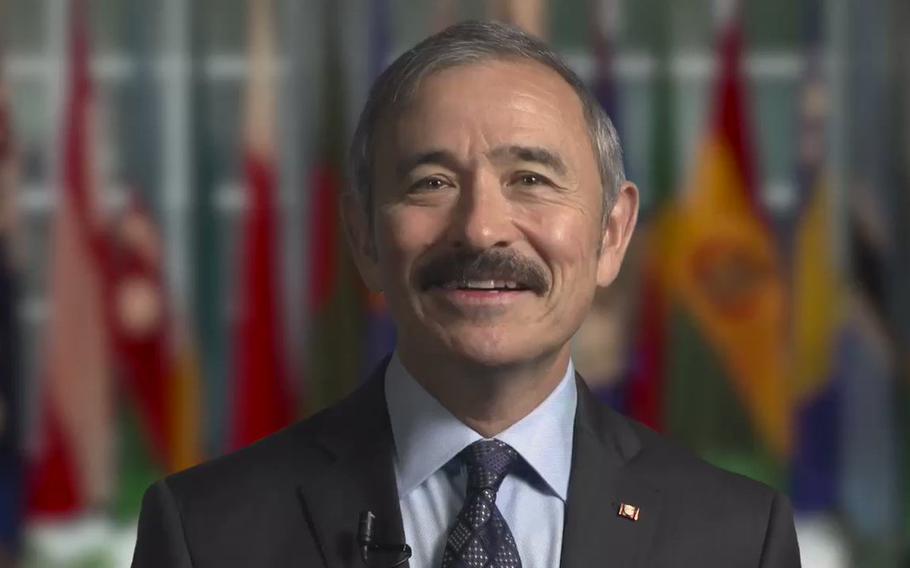 SEOUL, South Korea — The new U.S. ambassador to South Korea, Harry Harris, has vowed to work to maintain the bond between the two countries, calling them “the closest of friends and the strongest of allies.”

Harris, a retired Navy admiral who previously led U.S. forces in the Pacific, made the comments as he introduced himself to South Koreans in a video posted Thursday on the embassy’s social media sites.

He was confirmed by the Senate last week, allowing him to fill a position that has been vacant since the previous ambassador, Mark Lippert, left after President Donald Trump took office in January 2017.

“It’ll be a great privilege for me to serve as President Trump’s representative in a country that’s an ally and important partner of the U.S., not only in Northeast Asia but globally,” Harris said.

“For decades now our two nations have stood together, the closest of friends and the strongest of allies. I intend to do everything I can to maintain that bond,” he added.

Harris had been slated to be the ambassador to Australia until Secretary of State Mike Pompeo tapped him to go to Seoul.

He takes over at a critical time in U.S.-South Korean relations as the longtime allies have stepped up diplomatic efforts to persuade the North to abandon its nuclear weapons programs.

The White House said in February that it had dropped Victor Cha — an academic and former foreign policy adviser to President George W. Bush — from consideration as ambassador after a reported dispute over the possible use of a pre-emptive military strike against North Korea.

While Harris frequently touted the need for the allies to be ready “to fight tonight” in his role as the head of Pacific Command, he expressed support for Trump’s decision to suspend joint war games, which followed an unprecedented U.S.-North Korean summit June 12 in Singapore.

“The whole landscape has shifted. I believe we should give exercises, major exercises, a pause to see if Kim Jong Un is in fact serious about his part of the negotiations,” Harris said last month during a confirmation hearing. “I’ve spoken in the past about the need to bring Kim Jong Un to his senses and not to his knees.”

Harris also has been a vocal critic of China’s militarization of disputed areas of the South China Sea.

The brief video, interspersed with photos, focused on his impending move to South Korea, which he said will be soon.

He recalled his father talking about his experiences during the 1950-53 Korean War.

The former regional military commander also noted that he has frequently traveled to the country and is a “huge fan” of Korean food, especially the rice dish known as bibimbap and Andong soju, a local liquor.

He also said he and his wife, Bruni Bradley, admire the culture and collect traditional Korean masks.

“Folks, I’m jazzed about meeting you, experiencing more of Korea and working together to deepen the great partnership between our two countries,” he concluded.