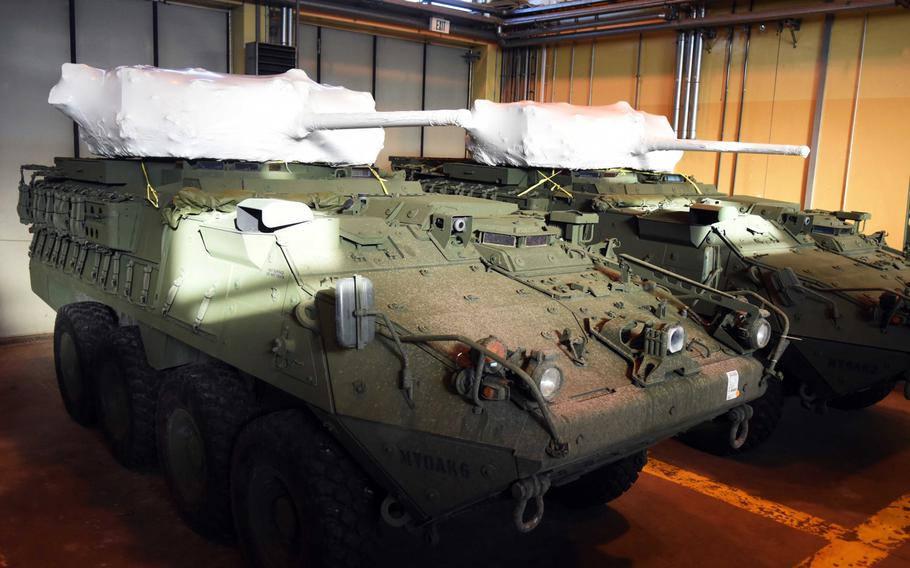 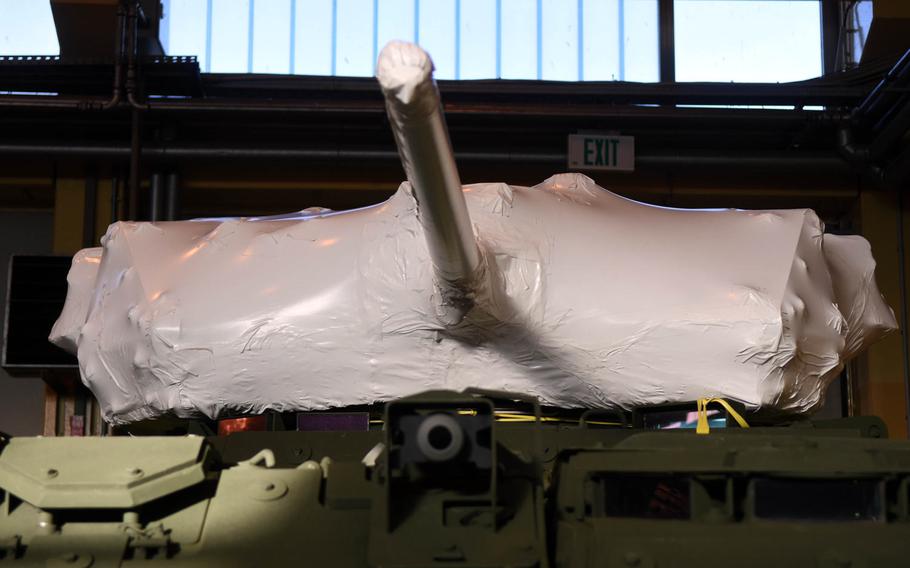 Buy Photo
The turret of one of the 2nd Cavalry Regiment's new upgunned Strykers with a 30 mm cannon still wrapped, at Vilseck, Germany, Wednesday, Dec. 13, 2017. (Martin Egnash/Stars and Stripes)

VILSECK, Germany — Christmas came early for the Army’s 2nd Cavalry Regiment when the first of the new, upgunned Strykers arrived this week, with their main guns still waiting to be unwrapped.

The regiment is the first unit in Europe to receive the new armored infantry fighting vehicles, which are built by General Dynamics. They are equipped with a new turret mounting a 30 mm autocannon — a huge increase in firepower from the current M2 .50-caliber machine guns, which allows the eight-wheel-drive troop transport to take on a larger variety of armored opponents.

The decision to speed development of the upgraded Strykers was made in 2015, shortly after Russia’s intervention in Ukraine. The U.S. side soon realized that the machine-gun-armed Stryker was outclassed by the Russian BMP-3 tracked infantry fighting vehicle, which mounts a 100 mm low-velocity gun or BTR-82 wheeled transporters with either a 30 mm autocannon or a 120 mm gun mortar.

The new 30 mm cannons on the “Dragoon” Strykers, named after the 2nd Cavalry Regiment, can fire high-explosive, armor-piercing and air-burst rounds. They have double the range of the machine guns. These benefits give the cavalrymen an added level of precision and lethality.

“The threat that we would face in Europe is mechanized based”, said 2nd Cavalry Regiment commander Col. Patrick Ellis. “If we have a chance encounter with a BMP, this makes us much more lethal.”

Critics of the Stryker vehicles have claimed they lack the firepower of modern tanks. While these new, upgunned Strykers still do not possess the lethality of a tank, the added 30 mm cannon does drastically increase their capability to engage armored-fighting vehicles and light tanks.

The Stryker’s primary role remains that of an infantry carrier, capable of transporting as many as nine soldiers onto the battlefield. It isn’t meant to face armor in a straight fight. Instead, the infantrymen carry their own anti-tank weapons.

“Were not going to be chasing tanks, that’s not what were here for,” Ellis said. “We are valued for our mobility, and ability to move large amounts of infantry forward, quickly.”