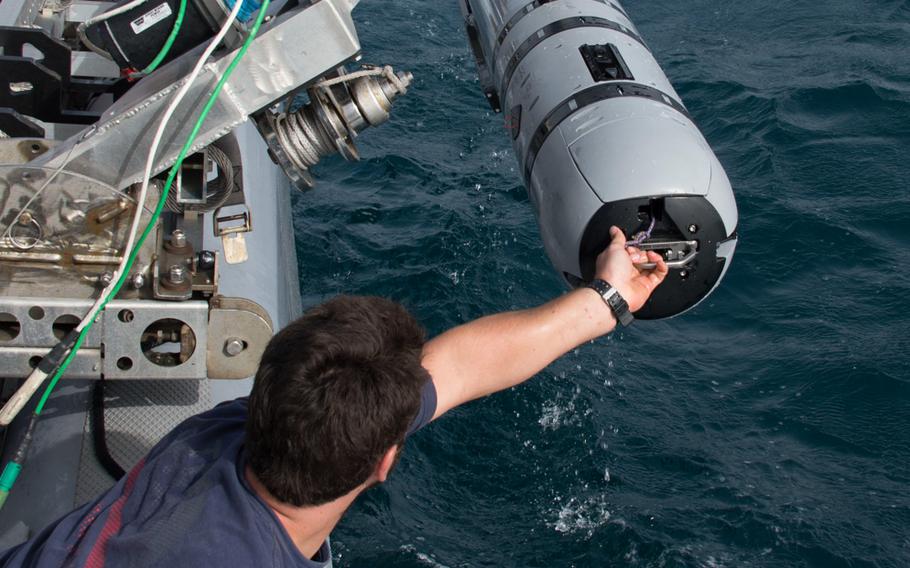 An Unmanned Underwater Vehicle (UUV) operator recovers a UUV after a successful run on May 17th, during an international mine countermeasures exercise. (Daniel Gay/Courtesy U.S. Navy)

An Unmanned Underwater Vehicle (UUV) operator recovers a UUV after a successful run on May 17th, during an international mine countermeasures exercise. (Daniel Gay/Courtesy U.S. Navy) 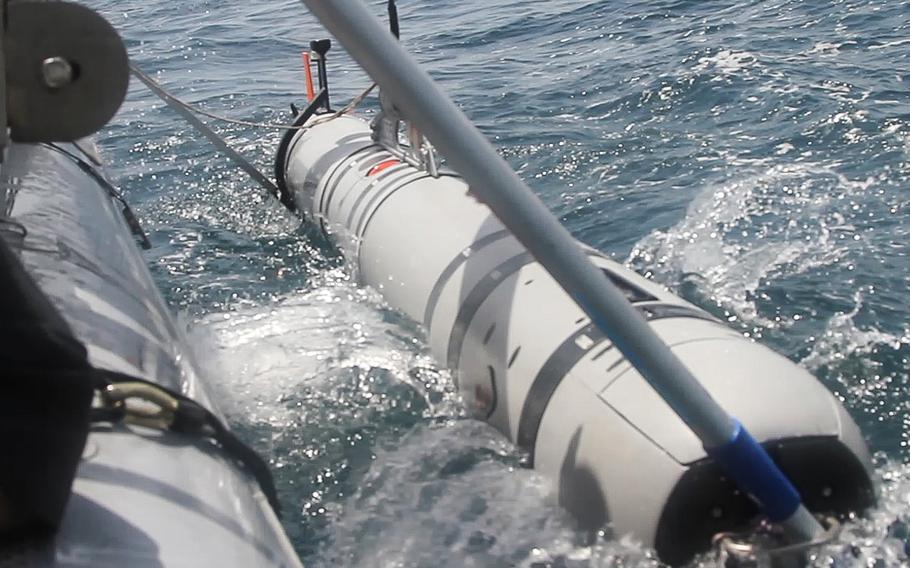 Buy Photo
An Unmanned Underwater Vehicle is recovered May 19th after a test during an international mine countermeasures exercise. (Hendrick Simoes/Stars and Stripes) An artistic representation of the use of an Unmanned Underwater Vehicle (UUV) in mine countermeasure operations. (Courtesy U.S. Navy)

MANAMA, Bahrain — Unmanned Underwater Vehicles are the newest tool in sea mine warfare and a key focus during the recent U.S. 5th Fleet-led international mine countermeasure exercise in the Persian Gulf. Using 18 units of the still-experimental technology, UUVs covered 70 square nautical miles during the three-week exercise involving 41 nations.

Testing new technology — particularly developments with the UUVs — was part of the motivation for holding the exercise so soon after a similar one eight months ago, according to U.S. 5th Fleet officials.

Although the U.S. Navy said that the 2012 International Mine Countermeasure Exercise had accomplished its operational training goals, the global intelligence consulting firm Stratfor reported that, in fact, fewer than half of the 29 simulated mines were found.

Senior military leaders are excited about the promising new capability of UUVs, especially in this very hot Middle East region where crew fatigue during minesweeping operations is a source of concern.

UUVs are “much more persistent,” meaning they have the ability to hunt for mines for longer periods of time, said Vice Adm. John Miller, commander of U.S. 5th Fleet.

He said the three-week exercise, which ended Thursday, was an opportunity to learn more about UUVs, how well they worked and how to best use them.

“Now it’s a matter of us perfecting our procedures for using that tech and helping that technology to continue to grow,” he added.

One of the UUVs tested during the exercise was the Mk 18 Mod 2 Remus 600, built by Hydroid Inc., a manufacturer of autonomous underwater vehicles.

“The imagery it produces is much greater than the legacy systems that are out there,” said Jim Bass, a team leader at ITT Exelis, the company contracted by the U.S. Navy to evaluate and develop this emerging technology to meet the Navy’s objectives.

The device can follow pre-programmed routes to map the bottom of the sea, allowing various objects, including potential sea mines, to be identified. But, because this particular UUV uses proprietary technology belonging to his company, Bass said, he could not go into detail about its full capabilities.

His team has been in theater for a year testing the MK 18 Mod 2, but said the program has been around five years.

Miller stressed that the best part of using UUVs for hunting mines is that it “takes sailors out of minefields, and inherently that is a good thing.”