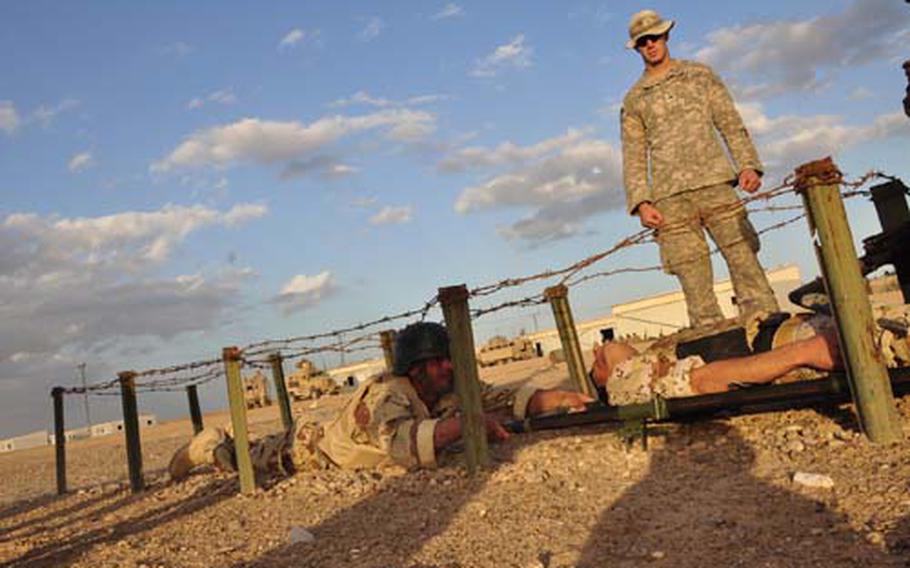 Sgt. William Winstead watches Iraqi soldiers crawl under barbed wire while hauling a soldier playing an injury victim on a litter. The Iraqi soldiers were participating in a timed obstacle course as part of their training in combat first aid. (Seth Robbins / S&S)

Sgt. William Winstead watches Iraqi soldiers crawl under barbed wire while hauling a soldier playing an injury victim on a litter. The Iraqi soldiers were participating in a timed obstacle course as part of their training in combat first aid. (Seth Robbins / S&S) 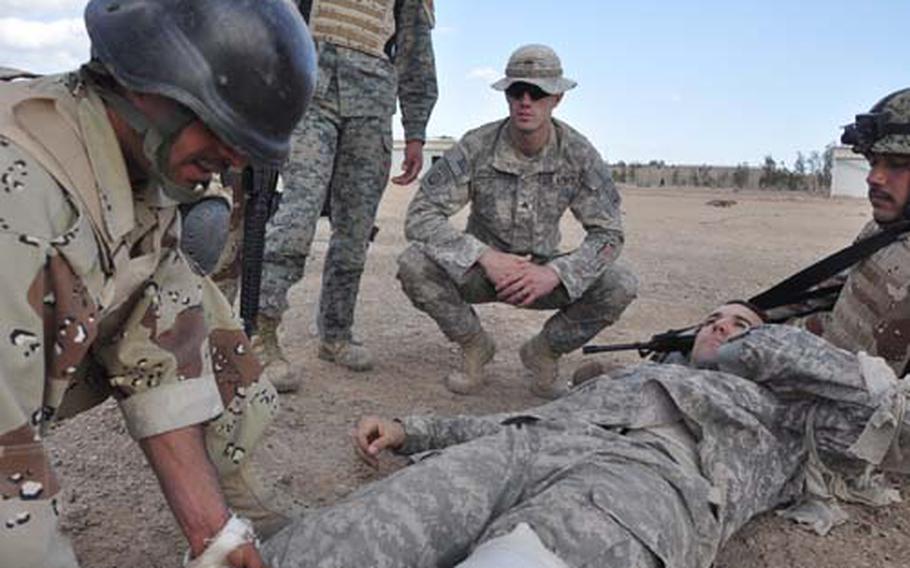 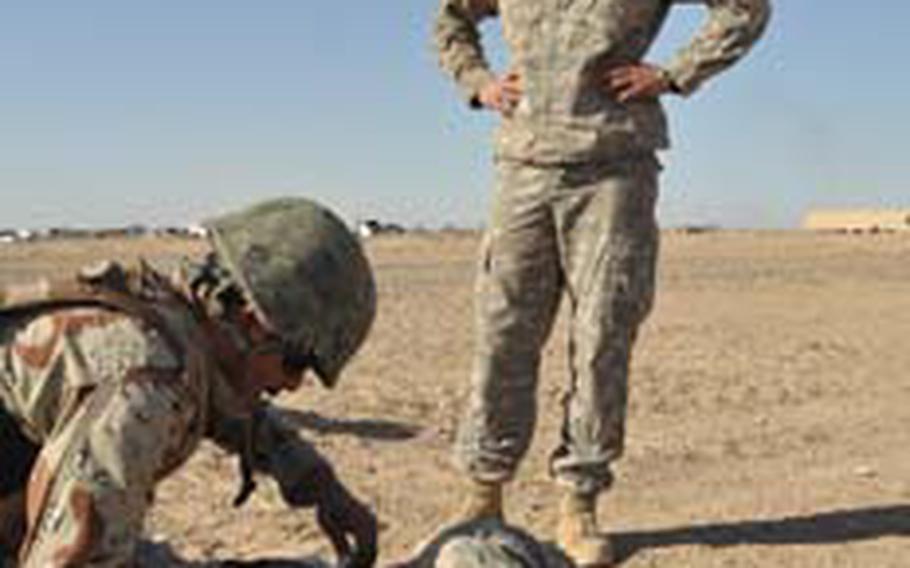 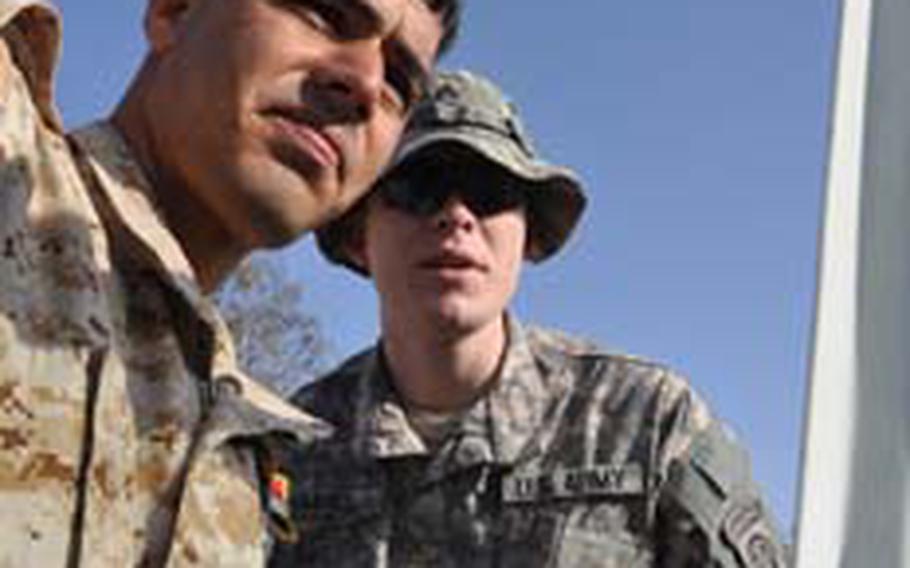 Iraqi soldier Adil Salem brushes for fingerprints while Sgt. Kellen Hamel, part of a special weapons exploitation team with the 1st Brigade Special Troops Battalion, gives him pointers on how to apply the fingerprint dust. Salem was taking part in a class that focused on crime scene investigation. (Seth Robbins / S&S) 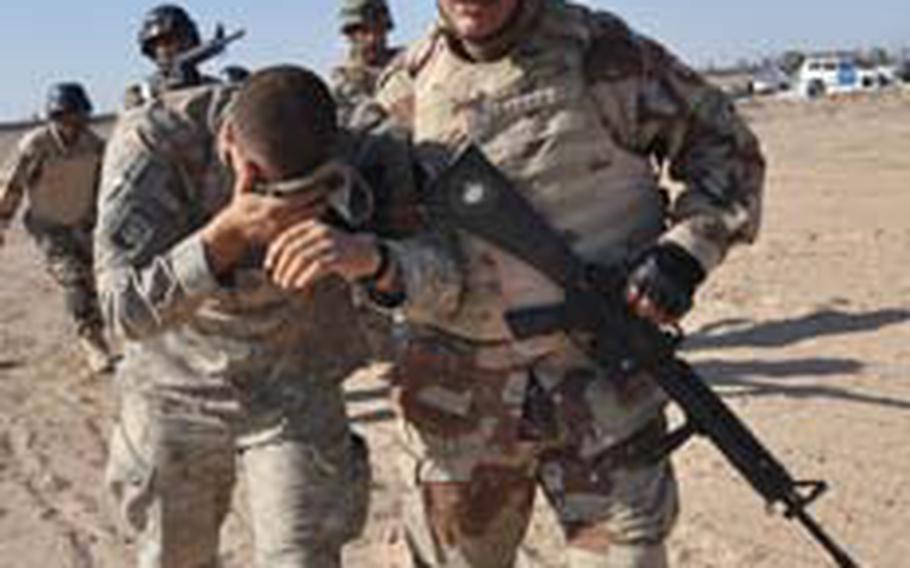 Iraqi soldier Javod Waesm helps Pfc. Steven McNally to safety during a mock bombing, where he was "blinded" by shrapnel. (Seth Robbins / S&S)

Last week, Fakhar and his reconnaissance squad learned crime scene investigation techniques, such as lifting latent fingerprints, from U.S. soldiers who were part of a special weapons exploitation team.

The Iraqis are being trained by the 1st Brigade, 82nd Airborne Division, which is now serving as an Advise and Assist Brigade, a new type of unit that began to arrive in the fall.

Although the same size as brigade combat units, AABs are designed to concentrate less on combat and more on training and mentoring Iraqi security forces, reflecting the shift in the military&#8217;s role in Iraq. The AABs include more field-grade officers serving as advisers and come equipped with more expertise in engineering, military policing, civil affairs and other subjects, officials say. Training is offered in Iraqi culture and teaching techniques.

The brigades are expected to remain after combat troops are pulled out in December 2011 &#8212; and might be called upon to protect themselves and civilians.

The military has had a tough time getting enough field officers in the pipeline and trained up for the AABs, said John Nagl, president of the Center for a New American Security in Washington, D.C. He said his impression was the AABs were getting better, but weren&#8217;t there yet.

Readying the Iraqi security forces is of paramount importance in Anbar province. The first wave of Marines has already packed up and left the province, home to some of the bloodiest battles and earliest turning points in the war. The Marines on Saturday handed responsibility for the area over to the U.S. Army.

Besides crime scene investigation, the 1st Brigade, 82nd Airborne Division taught Iraqi soldiers how to properly investigate a roadside bomb explosion and locate and dispose of ordnance, as well as basic soldiering techniques.

After a recent string of suicide bombings, one which severely wounded Anbar&#8217;s governor, the question lingers whether Iraqi security forces are ready.

&#8220;I think we are,&#8221; Fakhar said. &#8220;We have full control of the cities. Pretty much what we need is intelligence, and the intelligence sector of the army is getting better, getting skills with these kinds of classes.&#8221;

The 3,500 U.S. soldiers in the 1st Brigade, 82nd Airborne have become impromptu teachers, and the Iraqis can be unruly students, debating and disagreeing with the U.S. soldiers about techniques and tactics. Still, the U.S. troops say they have enjoyed meeting their Iraqi counterparts, an opportunity they were not always afforded in previous deployments.

Recent training showed mixed results. Supposedly facing fire from a bunker, the Iraqi soldiers quickly killed the enemy, mimicking, with their voices, the &#8220;rat-tat&#8221; sounds of their rifles unloading.

But they forgot to check on a comrade struck by a bullet, leaving him to die from a supposed sucking chest wound. Sgt. 1st Class George A. Fisher explained their error, but the soldiers were clearly more taken with their success at killing the lone enemy fighter than the loss of their fellow soldier.

&#8220;We train constantly at Fort Bragg (N.C.) to conduct offensive operations, patrols where we are looking for bad guys to kill or capture,&#8221; Fisher said. &#8220;To deploy and then get tasked with something completely out of our job description is a little disheartening.&#8221;

First Sgt. David Jordan reminded him of the alternative, which, while more exciting, was also much more dangerous. Jordan said he has seen the Iraqi army improve from the time he was deployed in Mosul as a trainer.

The language barriers can be daunting. A cacophony of Arabic and English echoed through the headsets during a joint route-clearing mission.

First Lt. Nathaniel Curley, platoon leader of Company A, 1st Brigade Special Troops Battalion, had to relay what his soldiers were seeing, such as any suspicious items on the road, to an interpreter, who then translated that information to the Iraqi soldiers and vice versa.

At one point during the clearance, Curley asked the Iraqi soldiers to investigate a canister in the median. Unable to work their vehicle&#8217;s arm to explore the bomb, the Iraqi lieutenants offered to explore the canister by hand. Curley squelched that idea.

When the lieutenants came across another strange object, their instinct, again, was to hop out and check it out. After the mission, Curley lectured Iraqi soldiers on the importance of using their equipment.