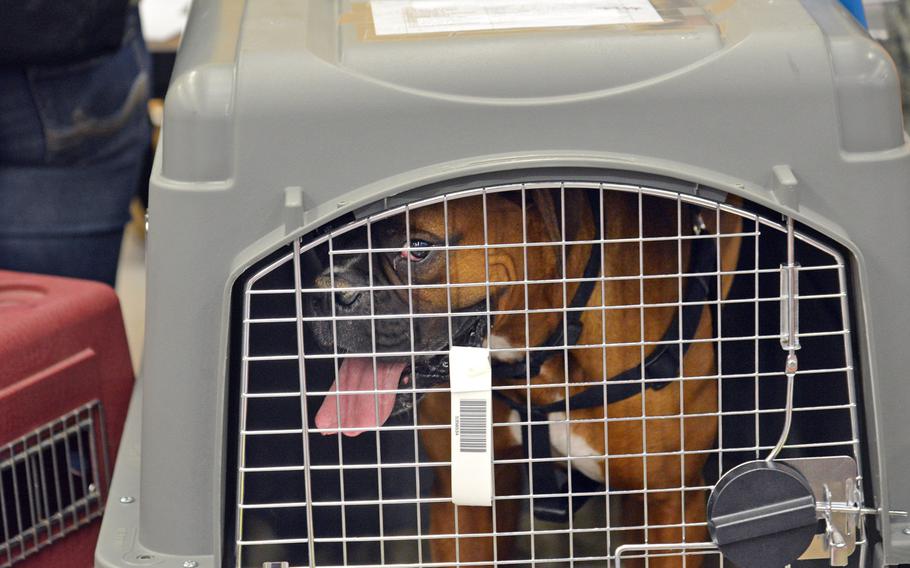 Buy Photo
A dog waits to be picked up by its owner after arriving at Ramstein Air Base, Germany, in March 2016. United Airlines has announced new restrictions to its pet transportation program that go into effect next month. They include a ban on 25 breeds of short-nosed dogs and cats and oversize crates for large-breed dogs. (Michael Abrams/Stars and Stripes)

A new United Airlines policy could force some military families serving overseas to leave their cats and dogs behind, while others may be able to take them at a far higher cost.

When United Airlines resumes shipping pets in June, it will no longer transport some 25 breeds of dogs and cats and will bar oversized carriers commonly used for large dog breeds, such as Labradors, golden retrievers and German shepherds.

The ban on certain breeds — including mixed breeds — is based on the greater health risks they face in flight, according to United.

The airline temporarily ceased shipping pets in March because of several well-publicized mishaps.

The new restrictions, announced Tuesday after a review of its PetSafe program, begin June 18 and are part of what United says will improve the safety of pets traveling as cargo.

But the effect will be “catastrophic for pet owners,” particularly military families overseas who already have fewer options, said Leo Mendoza, whose company in South Korea ships pets to and from that country and Okinawa, Japan.

United spokesman Charles Hobart said the new policy is aimed at improving the safety of pets while traveling.

The new policy could be a death sentence for animals when it’s time for a mandatory move, Mendoza said.

Other airlines, such as Lufthansa and Korean Air, will ship large-breed dogs but at more than twice the cost of what United charged, he said.

Military air is an option, but Patriot Express flights take only a few animals per plane.

Mendoza started an online petition at change.org Wednesday imploring United to make an exception to its new pet policy for U.S. military and Defense Department families who are overseas or returning stateside.

It grew to 6,400 signatures by Wednesday afternoon.

One woman commented on Mendoza’s company Facebook page that her family agreed to live apart for the length of her husband’s overseas tour, rather than lose their pets.

“We have decided for my husband to go unaccompanied due to our dogs, we are absolutely devastated,” she said.

In the first, a French bulldog puppy appeared to have suffocated after a flight attendant told its owner to place its carrier in an overhead bin. Soon after, three dogs were loaded on the wrong planes, including a Kansas City, Missouri-bound German shepherd that ended up in Japan.

Hobart said Wednesday that extension for families on Guam would be granted indefinitely.

United previously banned short-nosed animals during the hot summer months but allowed them to travel at other times of year. Other airlines, such as Delta and American Airlines, restrict most if not all snub-nosed cats and dogs from flying in the cargo compartment.

Such breeds tend to have breathing problems, particularly at higher altitudes.

But Mendoza said most worrisome is United’s new limitation on crate size to no taller than 30 inches.

Labradors, golden retrievers, German shepherds “and other large dogs are now unable to fly,” he said.

United and most airlines require about 3 to 6 inches of head clearance in a crate, Mendoza said.

A lot of common household dogs are over that height, he said.

The average height of a German shepherd is between 22 and 26 inches, according to petguide.com.

For the 700 series “giant” crate, which measures 32.5 inches tall and typically is used to transport large dogs, United previously charged about a third of what other airlines did from Korea, Mendoza said.

After adding all the associated costs, a dog weighing 70 to 100 pounds cost $856 on United going from Seoul to San Francisco, he said.

Furthermore, United is often the only way to ship dogs to smaller cities in the States.

Korean Air and Lufthansa only fly to major airports, he said.

Mendoza isn’t sure why United banned crates for large dogs. “There is no greater risk to big dogs in flight,” he said. “They naturally have bigger nasal passages and can withstand pressure differences much better.”

But Hobart said Wednesday large breeds are more prone “to adverse health risks,” though he could not immediately say which ones.