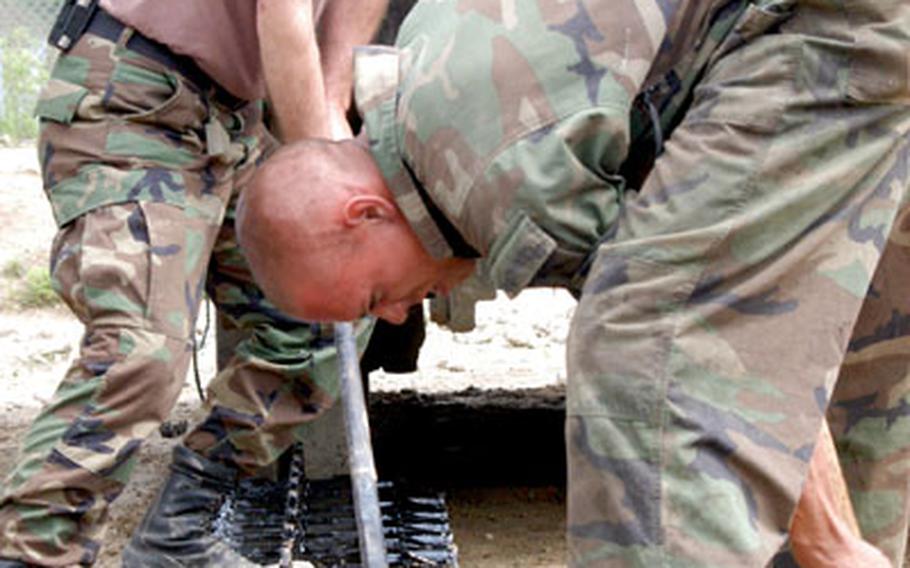 When the track arrived on Tuesday, it was like Christmas for the mechanics as they eagerly assembled strands of gleaming black blocks in the range maintenance bay.

Earlier in the week, the mechanics complained a track shortage left one Bradley out of action and others driving on worn track during an exercise at the range. Ninety-six blocks of track reached 2nd Battalion on Tuesday, enough to get the previously disabled Bradley up and running.

Spc. Geoffrey Flores worked on the new track with a sledgehammer, banging in massive metal pins to link the blocks together &#8212; all in time to blaring rock music playing nearby. The track arrived in eight-block sections. The sections are linked together; some are broken down into smaller sections, then joined to form the tracks, Flores explained.

Battalion commander Lt. Col. David Blain said the track shortage was a new problem. &#8220;In the two years I have been battalion commander, we have maintained a 95 per cent O.R. (operational readiness) rate, which is above the Army average. That is largely due to the hard work that our maintenance platoon does and for the most part, responsiveness in the parts supply system,&#8221; he said.

Recent track shortfalls occasionally left an impaired vehicle on 2-9&#8217;s inventory &#8220;but never more than one completely down for Bradley track,&#8221; he said. Other parts are no more difficult to get on Rodriguez Range than elsewhere Blain has served during an 18-year Army career, he said.

&#8220;When something breaks we want the part right now. Sometimes we have to carry a vehicle down for a period of time until the part comes in but that lag is no greater than any other place I have been, with the recent exception of track for the Bradleys,&#8221; he said.