New tracking system to debut in 2012 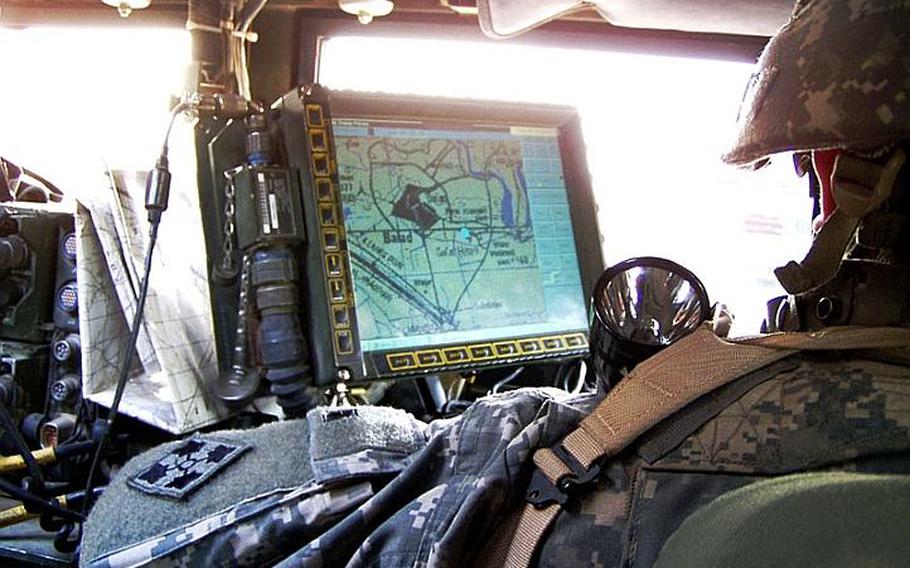 The Force XXI Battle Command Brigade-and-Below tracking system is mounted inside a Humvee in this April, 2008 photo. The tracking system is undergoing upgrades on its satellite network and software. The system allows commanders and troops to track friendly and hostile forces on the ground. (Photo courtesy of the U.S. Army)

WIESBADEN, Germany &mdash; The Army&rsquo;s computer system that tracks friendly and enemy forces on the battlefield is getting major upgrades to make it work faster, easier and have more features for the user.

The Force XXI Battle Command Brigade-and-Below tracking system, which uses global position systems, is used in some vehicles and aircraft, as well as by soldiers on the ground.

Developed by Program Executive Office Command Control Communications - Tactical, the new version of the system will incorporate a new network called Blue Force Tracking 2 and is slated to be fielded by mid-2012. It&rsquo;s designed to synch with new software being developed between the Army and Marines.

Lt. Col. B.J. Stephens, the product manager for Blue Force Tracking, said the new network will be roughly 10 times faster than the existing one, but it&rsquo;s hard to compare because the networks are completely different.

The tracking system works like this: Transceivers send information up to a satellite and then down to a ground station, which sends the information to the units in the field. This eliminates a step from the current model, which requires information to reach a Network Operations Center located in the U.S.

The new platform also will allow troops to access information and photos from their vehicles, information that previously was available only at the Tactical Operations Center. This means soldiers can highlight their routes before departing on patrols and also see what happened on that route the last time the tracker was used.

Besides speed, the new tracking system offers other advantages, including the ability to transmit and receive messages at the same time, something the current system doesn&rsquo;t allow. Users will also be able to transmit imagery, such as pictures of an enemy target.

The new software platform will also allow the systems to be used between soldiers, Marines and Army aviation assets.

&ldquo;We need to be able to handle the aspect of (Marines) being at sea and landings,&rdquo; said Lt. Col. Mark Daniels, product manager for Joint Battle Command-Platforms.

Daniels said they are conducting quarterly sessions with troops to listen to their input on what can be improved with the software.

&ldquo;(We want to) make the new software so intuitive that soldiers could train themselves in a matter of minutes,&rdquo; Daniels said.