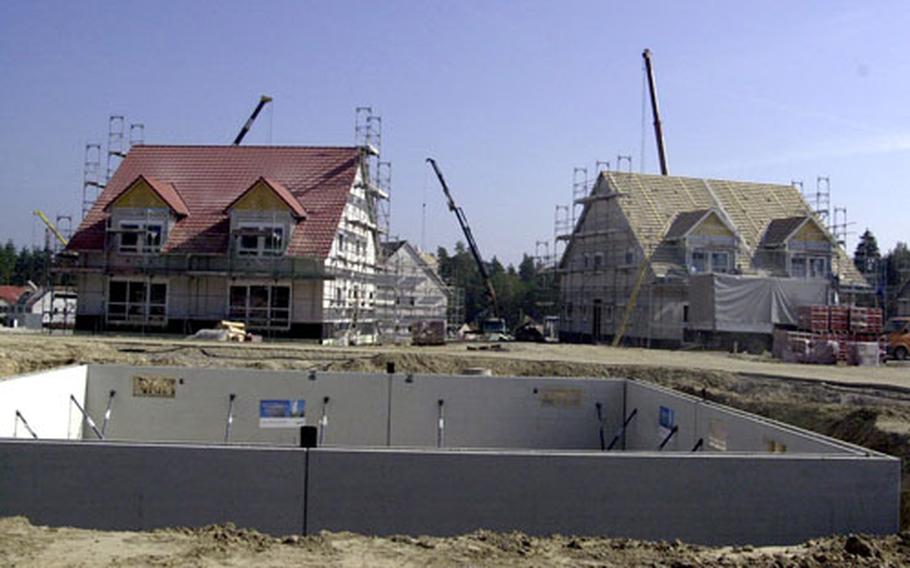 New houses for soldiers and their families are starting to sprout at Netzaberg. (Seth Robson / S&S)

New houses for soldiers and their families are starting to sprout at Netzaberg. (Seth Robson / S&S) Bavarian Minister-President Edmund Stoiber speaks at a ceremony to open the new town of Netzaberg, which will house U.S. military personnel and their families at Grafenwöhr. (Seth Robson / S&S)

GRAFENW&#214;HR, Germany &#8211; A new town was officially opened here Friday to house thousands of U.S. soldiers and their families.

Netzaberg, which is due to welcome its first residents next year, will feature middle and elementary schools, a youth center, convenience store, 830 houses and an access road to the training area.

The project is part of a billion-dollar expansion of the Grafenw&#246;hr training area that will see the base grow from a 1,000-soldier garrison with 2,000 military family members (according to an April 2005 census) to a brigade-size facility with 4,500 active-duty soldiers and 7,000 family members.

Bavarian Minister-President Edmund Stoiber, standing in what used to be the beer garden of a demolished guesthouse at Netzaberg, told guests at the town&#8217;s opening ceremony that he was impressed by the plan for the community when he first learned of it in February 2000.

&#8220;The state government very quickly established a state construction office here at Grafenw&#246;hr military installation to ensure that all planning and all solicitations could be easily coordinated with U.S. authorities and the construction projects rapidly implanted,&#8221; he said.

Bavarian construction company Zapf and various sub-contractors are doing the construction work at Netzaberg, he said.

&#8220;This is a stroke of luck for the Bavarian construction industry,&#8221; he added as workers hammered away on half a dozen partially-built houses nearby.

Grafenw&#246;hr&#8217;s director of public works, Dwane Watsek, said recently that much of the exterior work on Netzaberg&#8217;s new elementary and middle school complex is finished. Watsek said the school project is 50 percent complete, with construction due to finish by mid-October next year.

Construction has begun on a child development center and youth services complex along with a road ringing the government-controlled portion of the town.