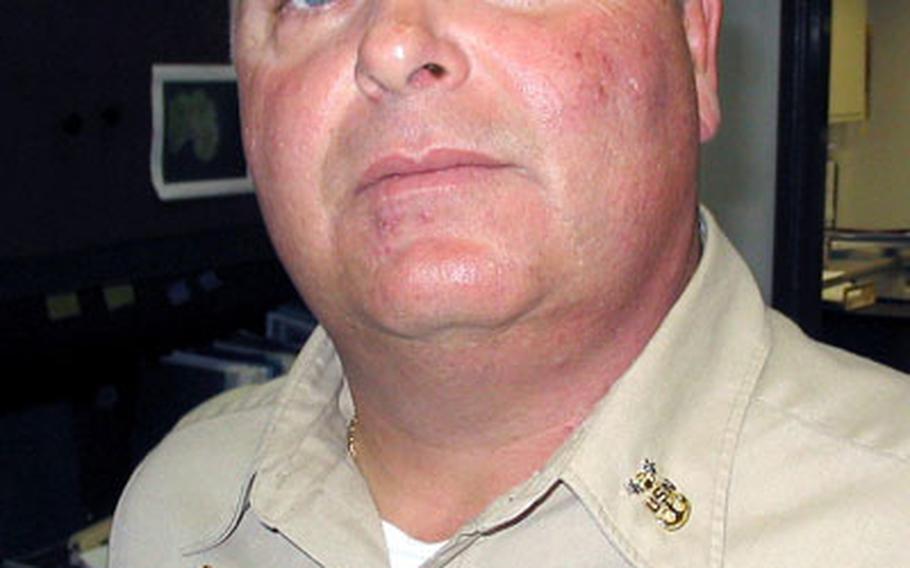 It doesn&#8217;t hurt that Master Chief Petty Officer J.D. Blevins has detailed knowledge of the force and the area: Of the 27 years he&#8217;s spent in the Navy, about five have been spent in Sasebo.

And he didn&#8217;t have far to move when assuming the post; he simply stepped off USS Fort McHenry and strolled down the India Basin pier to his new office.

Before being named the base&#8217;s top enlisted leader, Blevins, 44, had been Fort McHenry&#8217;s command master chief since January 2003 and also had served in Sasebo from 1998 through 2001 as senior enlisted leader on the USS Belleau Wood, which the USS Essex replaced.

&#8220;Right now, probably of all the issues I am working with concerning our sailors here in Sasebo, the No. 1 is conduct assurance,&#8221; he said Tuesday.

Sailors must follow the Navy&#8217;s civilian clothes policy restricting certain unflattering or revealing dress, obey local laws, be sensitive to local culture and follow regulations pertaining to any other liberty rules that might apply, such as a curfew.

Blevins said the behavior emphasis isn&#8217;t because incidents and complaints involving Sasebo&#8217;s sailors are increasing. In fact, he said, initiatives such as the Exceptional Sailor Program have curbed incidents.

As to upcoming ship activities, he said the Fort McHenry will take part in Cooperation Afloat Readiness and Training exercise later this year and Essex is preparing for an inspection. Otherwise, the ships may remain in port for the near future &#8212; something always subject to change.