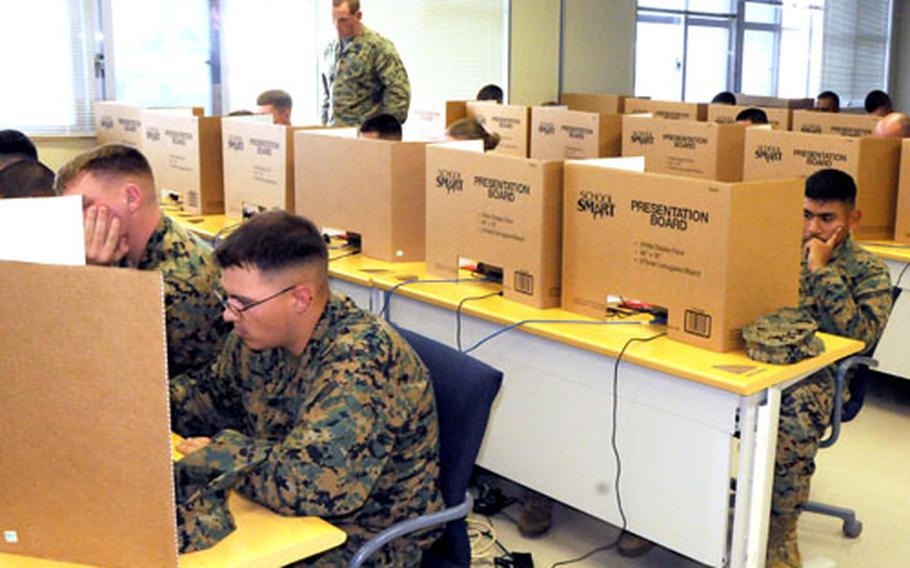 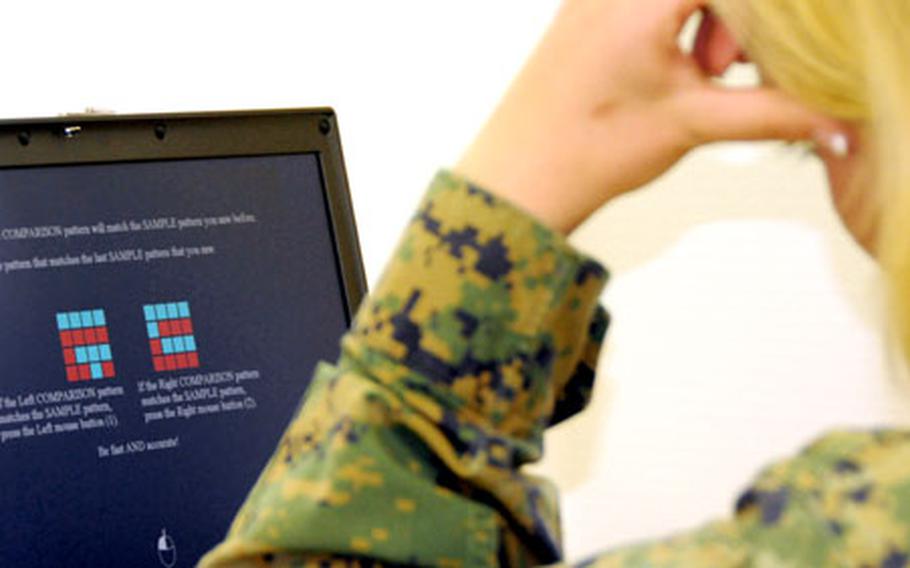 Gunnery Sgt. Wendy Silvera, with 3rd Marine Division, decides which grid matches the one she saw several seconds previously during the matching-samples portion of the test. (Cindy Fisher / S&S) 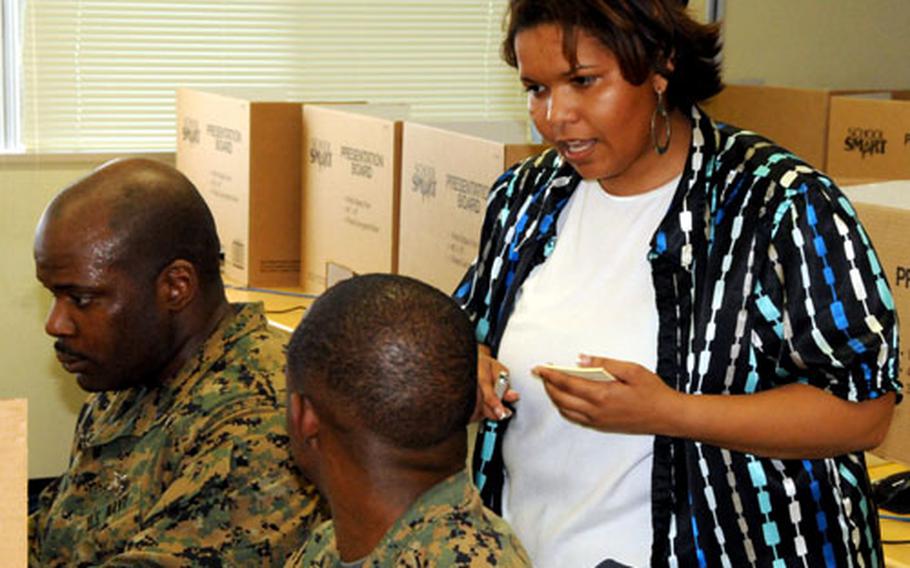 Andrea Struat, an embedded ANAM tester from Schofield Barracks in Hawaii, provides assistance to troops taking the test. She was part of a three-member team from Hawaii here for two days to test more than 700 Okinawa-based troops. The team was scheduled to head for Camp Zama on mainland Japan on Thursday. (Cindy Fisher / S&S)

CAMP FOSTER, Okinawa &#8212; More than 700 Okinawa-based troops had their brains tested this week, minus the electrodes and wires.

The Department of Defense mandated that all deploying troops must take a cognitive functional assessment that provides a baseline measurement of healthy cognitive functions in case they receive a traumatic brain injury during deployment, Army Lt. Col. Margaret Nava, the Automated Neuropsychological Assessment Metric program director for the Pacific, said Wednesday.

Nava&#8217;s team, based out of Tripler Army Medical Center at Schofield Barracks in Hawaii, provides ANAM support Pacific-wide on an as-needed basis, she said.

This was the team&#8217;s third visit to Okinawa since December, she said.

Traumatic brain injury "is the signature injury" of combat in Iraq and Afghanistan, said Navy Cmdr. Juliann Althoff, the preventive medicine officer for III Marine Expeditionary Force and the person tasked with coordinating assessments for all Okinawa-based troops before they deploy.

Traumatic brain injury occurs when a blow or jolt to the head disrupts brain functions.

Symptoms of even mild TBI can include loss of consciousness for a few minutes, mood changes, lethargy and memory or concentration difficulty, according to the National Institute of Neurological Disorders and Stroke Web site.

"It&#8217;s like a video game" and doesn&#8217;t require studying or specialized skill or knowledge to take, she said.

Nava advised that troops should have the ANAM completed within 12 months of deploying.

A Marine administrative message requires that Marines complete an ANAM within four to six months of a deployment.

Each service has to decide its own guidelines and "we&#8217;re supporting" that, Nava said.

Troops should be well-rested and mentally alert in order to get a more accurate baseline, she said of the assessment, which takes 15 to 20 minutes to complete.

The results will be stored in a repository on Army Knowledge Online until each service develops its own procedures for the new requirement, Nava said.

The goal is to have the results stored in troops&#8217; electronic records, she said.

If a traumatic brain injury is suspected in the war zone, a doctor can request the baseline measurement and compare it with a post-incident test that can be administered downrange.

Though a mild TBI may be hard to detect, the ANAM "can raise the flag" that someone needs additional testing, Nava said.

There are a lot of misconceptions about ANAM, officials said.

The three-person team headed to mainland Japan on Thursday to administer the ANAM to troops at Camp Zama. Nava said they also planned to train staff there to help Camp Zama establish its own team.

CAMP FOSTER, Okinawa &#8212; I had the chance to take the Automated Neuropsychological Assessment Metric, and I have to say, spelling the test&#8217;s name is the hardest thing about it.

Going into the assessment, I felt pretty confident I would do well &#8212; until testers told me there would be math involved.

Fortunately for me, the most complicated problem went something like: Is 9+3-4 higher than or lower than 5?

After counting on my fingers, I came up with 8.

My Waterloo was the Code Substitution Delayed section. Early in the test, you&#8217;re given a scale of numbers paired with symbols.

Then a series of number-symbols flash across the screen, and you answer yes or no if they are the same as the scale; you do that 72 times.

OK, that was pretty easy. Just look at the scale.

The trick is that several sections and about 10 minutes later you have to answer if number pairs matched the scale again &#8212; except this time you don&#8217;t get to see the scale.

Needless to say, I wasn&#8217;t 100 percent accurate on that section. Good thing there is no passing or failing in this test.

When it was all done, it was a relief to know that my cognitive functions aren&#8217;t too bad.

If only all my tests in school were that easy.