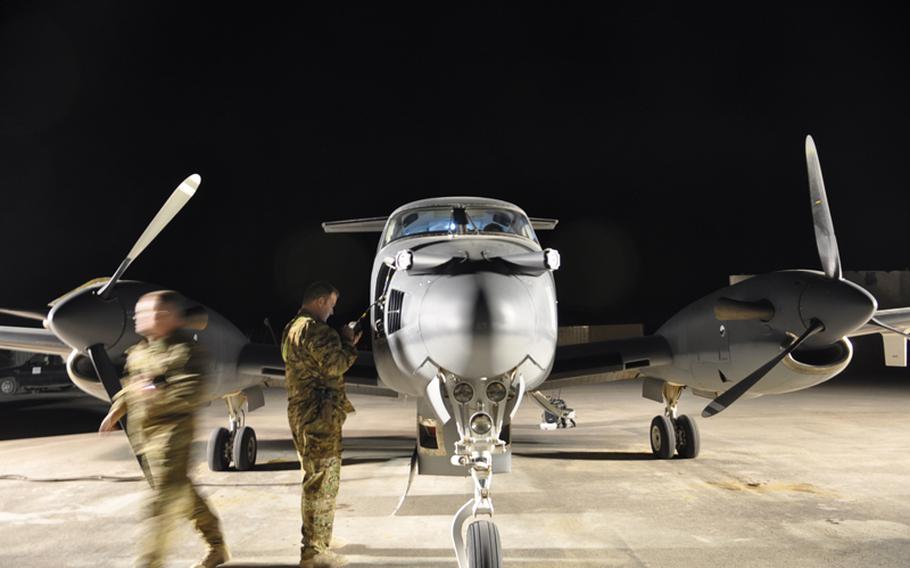 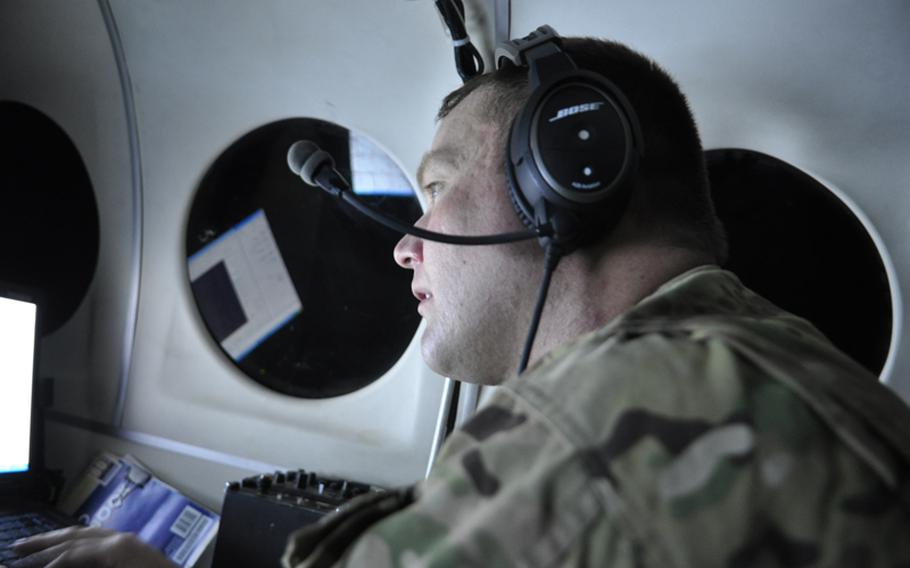 Buy Photo
First Lt. Daniel Fackel of with the Virginia National Guard listens to intercepted conversations while flying over a ground operation in Helmand province. (Heath Druzin/Stars and Stripes) 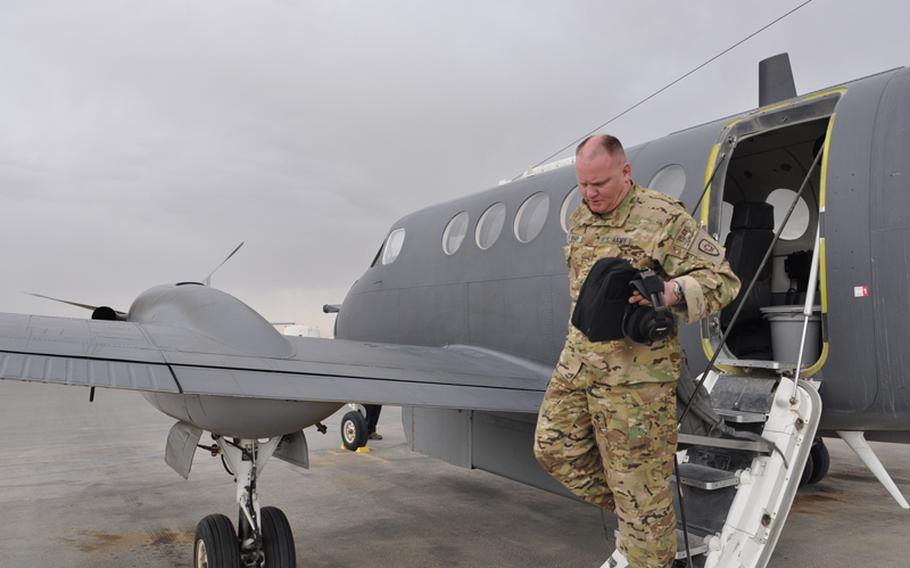 ABOVE HELMAND PROVINCE, Afghanistan &mdash; As British Marines pour out of Chinook helicopters into a village in eastern Helmand province, the crystal clear Pashto chatter coming through 1st Lt. Daniel Fackel&rsquo;s headset heats up. It&rsquo;s 4:30 a.m. and Fackel says that, at this hour in this dodgy neighborhood, no one speaking on a walkie-talkie is up to any good.

Twenty thousand feet below, a British ground controller checks in with the lieutenant.

Fackel is circling high above an air assault in an unassuming twin propeller Beechcraft King Air plane, using one of the Army&rsquo;s latest gadgets to jam and intercept insurgent transmissions. As he listens to the air assault unfolding through coalition communications, he also keeps an ear on what locals are saying. After he gets a lock on where the transmissions are coming from, interpreters embedded with the coalition start picking up insurgents talking about gathering rocket-propelled grenades launchers.

While the details of the technology are secret, insurgents know the broad-brush capabilities of the United States.

&ldquo;Some are trained pretty good and when we start jamming they&rsquo;ll get off (radios) for a couple hours,&rdquo; Fackel said. &ldquo;Others will keep trying.&rdquo;

The CEASAR, which stands for communications electronic attack with surveillance and reconnaissance, is a rectangular metal box that holds technology capable of both knocking out cell phones and radios and intercepting transmissions, while an electronic warfare officer onboard speaks directly to troops on the ground. It&rsquo;s precise enough to cover friendly soldiers while jamming insurgents, but not knocking out communications for an entire village near a given operation.

&ldquo;We can disrupt any kind of coordinated enemy action by stopping their communication,&rdquo; said National Guard Maj. Darrell Rasor, a pilot and commander of Task Force CEASAR, which operates out of Kandahar Air Field. &ldquo;We take away the element of surprise.&rdquo;

CEASAR&rsquo;s mission is less than a year old and Rasor&rsquo;s men are just the second Army unit to fly with the technology in battle.

Rasor and his soldiers rave about the technology and the relatively low cost of attaching it to a small, fuel-efficient plane, rather than fighter jets, which are often used for surveillance.

&ldquo;Two of these airplanes can replace a whole squadron of (EA-6B Prowlers),&rdquo; he said, referring to the much more expensive electronic warfare plane that costs tens of millions more to produce than the Air King-CEASAR combination.

This is the kind of support the Afghan security forces most worry about losing when the coalition leaves the country. While Afghans more and more are being thrust in front for ground operations, it&rsquo;s still the U.S. that provides almost all of the electronic intelligence capabilities.

The CEASAR plane often shares the skies with drones and spy planes providing clear overhead views of the battlefield, in addition to the attack helicopters and fighter jets that can be scrambled in minutes if ground troops get in a jam. There&rsquo;s a reason infantry troops are more relaxed with aircraft overhead, and as the planned 2014 troop drawdown nears, many Afghan soldiers look nervously to the sky.