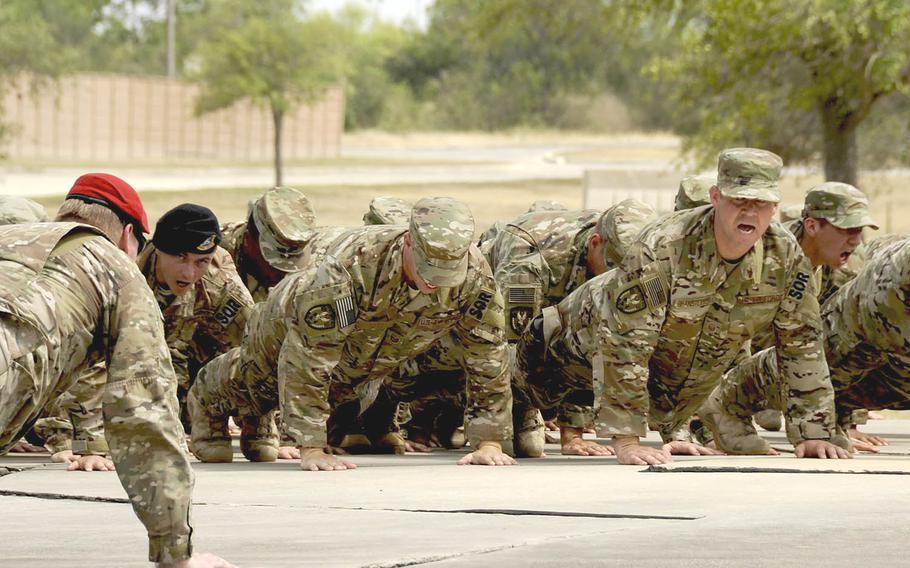 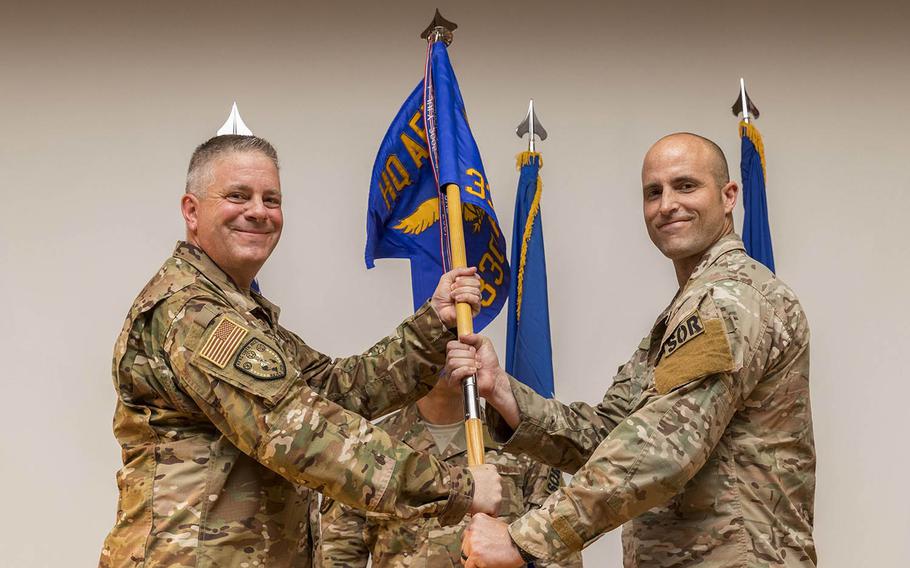 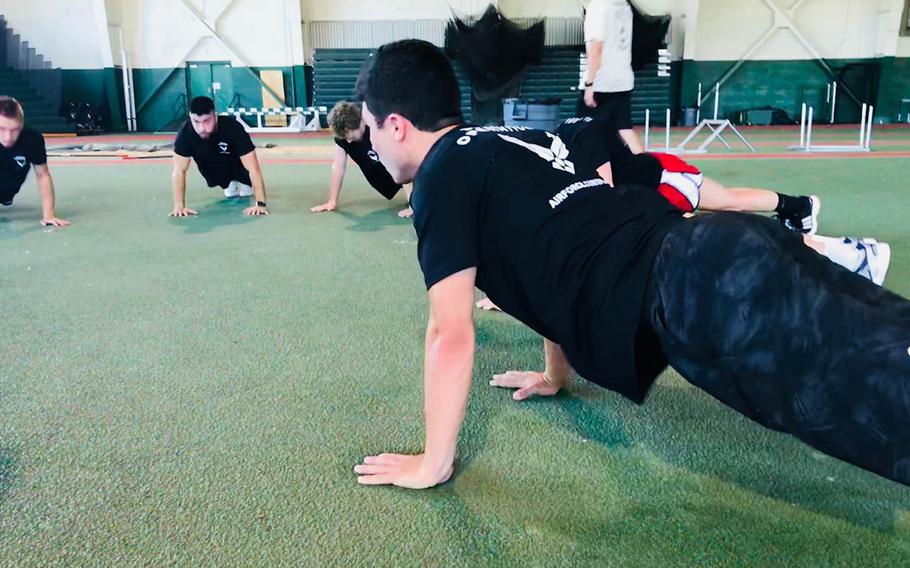 AUSTIN, Texas — Qualifying for Air Force Special Operations can take up to three years of training, and about 80 percent of battlefield airmen don’t make it.

The attrition rate has caused the Air Force to activate a new recruiting squadron — a unit solely dedicated to recruiting airmen in the fields of pararescue, combat controller, tactical air control and as special operations weather technicians.

“Our job is to focus on bringing in the high quality, right number of people,” said Maj. Heath Kerns, commander of the 330th Recruiting Squadron.

In the past, any recruiter could recruit for special operations, but now this 141-personnel squadron will recruit only to fill specialized jobs.

Formally activated June 29 at Joint Base San Antonio-Randolph in Texas, the squadron is just one of three ways the Air Force is revamping its preparation of battlefield airmen. The service has increased training opportunities before recruits enter the Air Force and has a new battlefield airmen preparatory course run by the newly activated 350th Battlefield Airman Training Squadron at Joint Base San Antonio-Lackland.

Each year, the goal is to send 1,664 qualified candidates into special operations. Kerns said this will help maintain troop levels. Training for each special operations job can vary, but once completed, the airmen become one of the Air Force’s 4,600 battlefield airmen.

“We span the globe, the full spectrum of special operations, from peak-time support to dropping bombs and taking out the bad guys and everywhere in between,” said Kerns, who began a career in this field after his 2004 graduation from the U.S. Air Force Academy.

Recruiting the right candidates for battlefield airmen has been a challenge at times, though Air Force recruiting officials said there is no indication that prolonged years of war in Iraq and Afghanistan have had an impact. The new process is more about fine-tuning to get the best results.

The 330th is the largest of the Air Force’s 28 recruiting squadrons and the only one that’s career-specific. Kerns said he is already seeing positive results among the candidates from this new focused approach. When they first began recruiting in October 2017, there were about 100 candidates in development, Kerns said. In July, they had 569.

“Those are people that we have vetted and are in the process of competing for the opportunity to start these careers,” he said. “Not just, ‘Hey you met the minimum qualification.’ Now we have a surplus of more people waiting in line than can go.”

He and his recruiters credit this success to the adapted, focused recruiting format.

Senior Master Sgt. Damian Vandevender, the squadron’s production superintendent, was the first member of the 330th. With 15 years’ experience in recruiting, he said this new format is “definitely different.”

To develop a recruiting strategy, Vandevender said they studied the training paths of each special operations job to see what recruiting could do to bring down attrition rates. They looked at candidates’ exit interviews, after they dropped out of the pipeline, and interviewed trainers to see what skills were consistently lacking.

“Recruiters don’t normally see what successful recruits look like,” he said. “It was very eye-opening.”

The squadron took this information and began to build on the traits of someone who was most likely to succeed. Kerns said successful recruits score well on the Armed Services Vocational Aptitude Battery test and show athleticism through a fitness test of running, swimming, push-ups, pull-ups and sit-ups.

Harder to quantify is the whole-person concept, “which I would more define as a good teammate, a good leader and intense grit. The ability to endure the most arduous of situations and excel and keep your wits about you and take care of your teammates,” Kerns said.

Successful candidates were on average at least 21 and had attended a couple years of college.

Ethan Holland, a 21-year-old recruit out of Colorado Springs, fits that bill.

Holland graduated with a degree in math this year from Colorado College, where he ran track and cross country. After spending so much time indoors studying during his final year, he realized he did not want a career behind a desk. So he headed for a recruiting office.

“Being a part of a team is a big deal to me,” he said. “Everything about the military that I’ve heard is that’s how it is. I’ve heard in special operations, it’s a very professional group. That really appeals to me. I want to be part of something that’s really good at what they do and takes pride toward that and works toward that.”

Holland plans to begin basic training in November and serve as a combat controller or in pararescue.

Learning where to look Once the 330th knew they wanted certain recruits, they had to figure out where to find them. The squadron met with their counterparts in Army Special Forces and the Navy SEALs, who Kerns said found themselves in a similar recruiting predicament about 10 years ago. The SEALs provided a map of locations where they recruit some of their best candidates.

“They’ve been very gracious to open their doors and say, ‘Hey, this is how we solved this problem.’ A lot of our model is based initially from what they did to turn things around for themselves,” Kerns said.

Based on the map, there are clear regions of the United States that consistently produce successful candidates for specific military jobs, he said. Factors that play into that include economics, fit lifestyles and the recreation and culture of an area.

The Pacific Northwest produces a lot of candidates for the field of survival, evasion, resistance and escape, commonly referred to as SERE, because outdoor activities and camping are such a big part of the lifestyle there, Kearns said. Good pararescue recruits tend to come from California because of the surfer lifestyle and strong swimming capabilities.

“Saving lives really appeals to them,” he said.

The squadron has recruiters in 100 locations across the country, many of them near college campuses, all reporting back to Randolph Air Force Base.

Sometimes, finding recruits means hosting leadership or fitness events with an athletics program at a college or high school. These can incorporate current or past members of special operations to share their stories.

‘Human weapon system’ Vandevender said the new strategies are also rewarding for the recruiters, who want to see the candidates they send to the Air Force succeed.

“We’re here to set you up for success now,” he said. “In the past, we were here to process you and get you into training. We want everybody to have the best chance to earn their beret. We’re not going to send you until you’re ready for that.”

Kevin Lee Fuller, a 21-year-old student in Saline, Mich., said he’s been working with a special operations recruiter to join the Air Force’s pararescue field. His original interest was to be an Army Ranger but he prefers the idea of saving lives.

“[My recruiter] Tech. Sgt. Jerimiah Baumgartner has been really helpful,” Fuller said. “He’s taught me a lot about what I’m getting into. We’ve done a lot of water confidence exercises.”

Once recruits are ready, they participate in the new eight-week Battlefield Airmen preparatory course at Lackland. The course is designed to further prepare airmen before they arrive for training in their chosen field, and it uses professional athlete-level sports medicine technology to prevent injuries and optimize performance.

“They are treated as elite athletes,” said Kerns, who went through an abridged weeklong version of the course along with his recruiters. “Similar to an aircraft, this is a human weapon system. There’s so much training that goes in to making you mentally, physically and emotionally resilient to be able to handle all these missions.”

Fuller said he’s happy to take the course on his way to pararescue training.

“We’ll be learning about techniques to just become a better athlete in general. I wrestled a lot, but I never had tutelage to that extent,” he said.

For recruits who don’t make it through special operations training, 98 percent are reclassified into a new job in the Air Force.