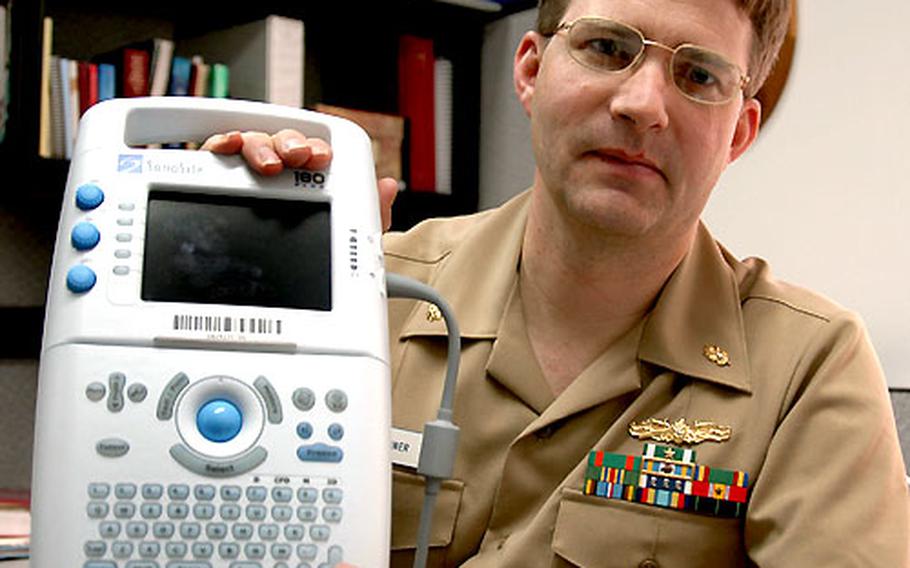 Lt. Cmdr. Tim Quiner shows just how portable are two new sonogram machines the Yokosuka base hospital bought recently for a total of $25,000. The machines are used primarily to confirm and date pregnancies. (Nancy Montgomery / S&S)

YOKOSUKA NAVAL BASE, Japan &#8212; One of the first things doctors do for their pregnant patients is take some measurements. There&#8217;s weight, blood pressure and pulse. And then, there&#8217;s crown-rump length.

Although that may sound like the measurement of a beef roast, it&#8217;s actually the distance from the top of a fetus&#8217;s head to its bottom. Starting at about eight weeks into the pregnancy, that measure is used to date the fetus&#8217;s age to within five days, doctors say.

And that measurement recently got much easier to get at Yokosuka&#8217;s base hospital, with two new sonogram machines bought for $25,000.

Called SonoSites, the machines are only about as big as a breadbox &#8212; about 14 inches long and 8 inches wide &#8212; but enable women to view their fetuses for the first time.

About 550 babies are born at the naval hospital each year, hospital officials estimated.

Additionally, Quiner said, the new machines are easier to use, and having two provides a backup.

The SonoSites appear to have come just in time: Yokosuka is in the midst of a baby boom this month, with about double the number of deliveries scheduled for most months. On Tuesday afternoon, Quiner said, seven pregnant women already had been seen at the hospital.

He said the machines are used mostly to confirm and date pregnancies so women can plan for their approximate due dates and tests can be run at appropriate times. They also can be used to help diagnose abdominal trauma, he said.