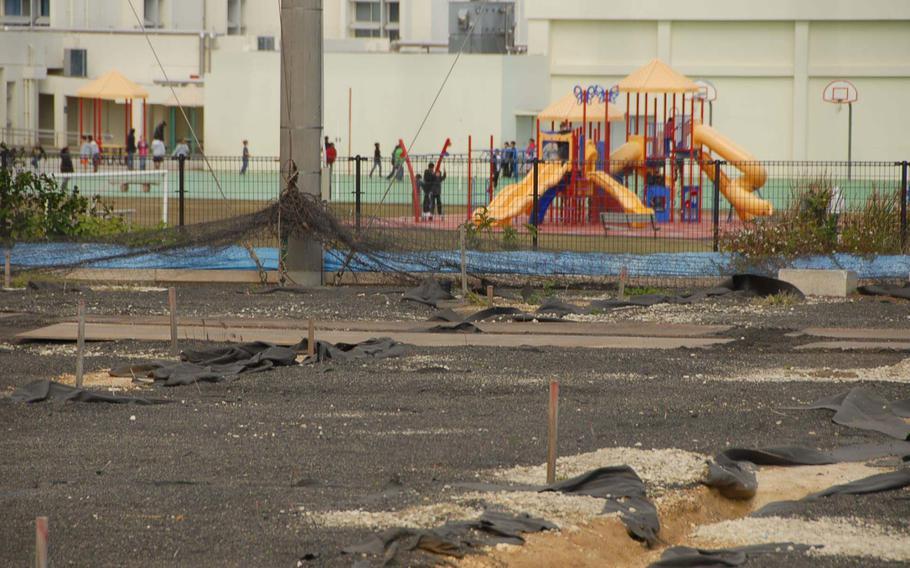 CAMP FOSTER, Okinawa — New tests on soil from schools at Kadena Air Base in Okinawa have found no danger of herbicides or dioxin despite fears over contaminated metal drums unearthed at a nearby soccer field, the Air Force announced Thursday.

The tests conducted this month by U.S. labs confirmed the results of earlier Air Force air and soil testing conducted around Amelia Earhart Intermediate School and Bob Hope Primary School. No trace was found of banned herbicides, and all other pollution was below safety standards, the service said.

Hundreds of military parents and residents have been on edge as Japanese workers removed 83 rusty drums — some contaminated with high levels of defoliant and dioxin — over the past nine months from an off-base Okinawa City recreational area that is within sight of the schools and a playground.

During a town hall meeting last month, some parents demanded additional testing as a safety measure for students, despite Japanese findings that the pollution had not spread across the soccer field or gotten into the ground water, and Air Force assurances that the schools were “completely safe.”

On Thursday, the service said it has completed its probes into the pollution.

“These results conclusively characterize and confirm that no contaminants have migrated from the excavation site to Kadena Air Base and that the [school] recreational area does not pose a health concern to the staff and students in the area,” said an Air Force statement that included the testing data. “No further surveillance is required.”

The soil samples from the schools were sent to three commercial labs in the United States that tested for dioxin, herbicides, PCBs, fuel constituents, metals and fluoride. Traces of some common environmental pollutants were found but none at a level deemed a health threat, the Air Force said.

Many residents have expressed fears of exposure to dioxin, which has been linked to cancer, reproductive and developmental problems, immune system damage and hormone imbalances.

Japanese tests on the drums found dioxin and the herbicide 2,4,5-trichlorophenoxyacetic acid. The latter’s use in commercial defoliants was discontinued in 1985 because of concerns over dioxin contamination, according to the Centers for Disease Control and Prevention.