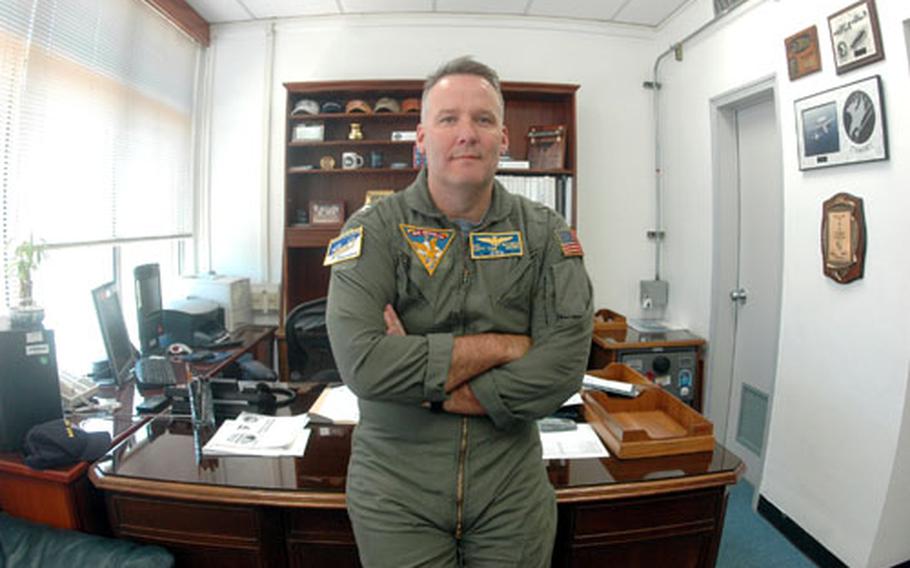 NAVAL AIR STATION SIGONELLA, Sicily &#8212; Capt. Thomas Quinn knows the value of not rocking the boat. As an aviator who has spent most of his naval career landing E-2C Hawkeyes on the decks of the moving targets of aircraft carriers, steady is safe.

And so, Quinn carries that mantra to his first shore-based command as skipper of Naval Air Station Sigonella, Sicily.

He doesn&#8217;t intend to make any immediate changes to the way things were run under the former base commander, Capt. Joe Stuyvesant.

&#8220;I&#8217;m still in input mode, still receiving information,&#8221; Quinn, 45, said during a recent interview from his second floor, corner office in the administrative building on Naval Air Station II, where he assumed command May 11. &#8220;I respect the job [Stuyvesant] did down here, and I want to continue on the path.&#8221;

For example, a key focal point for Quinn is to maintain various incentive programs and public awareness campaigns that base officials say contributed to a sharp decline in drunken driving incidents. Sigonella dropped from 56 DUI incidents in 2004 to 13 last year, said Lt. Jon Groveman, the base&#8217;s spokesman.

The self-professed &#8220;outgoing, dynamic and pretty funny&#8221; skipper is the type of person who doesn&#8217;t sweat the small stuff, said Quinn, who likes speaking in cliches.

For example, when an Italian newspaper reported on his taking command of Sigonella, it sensationalized his recent call-up as individual augmentee by publishing with the story a photo of the scandalous maltreatment of detainees at Abu Ghraib prison in Baghdad. No matter that Quinn served his time at the detention center in Guantanamo Bay, Cuba.

He was raised in Upper Darby, Pa., and graduated in 1984 from the U.S. Naval Academy with honors with a Bachelor of Science in math. From there, his was trained to pilot the E-2C Hawkeye, the Navy&#8217;s all-weather, carrier-based tactical airborne warning and control system aircraft.

His deployments and duty assignments include time on carriers such as the USS Nimitz, USS Theodore Roosevelt, USS George Washington, USS America, USS Dwight D. Eisenhower, a combat deployment in 2002 onboard the USS John F. Kennedy, and the USS Ronald Reagan, on which his tour made him a plank owner, a member of the ship&#8217;s crew when the ship is placed in commission.

In 1998, he attended the U.S. Naval War College, earning a Master of Arts degree.