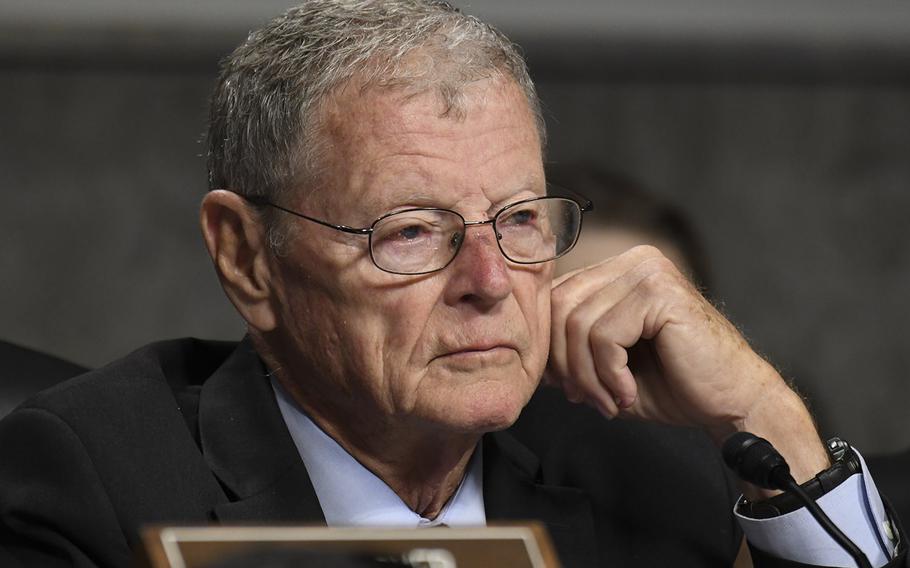 STUTTGART, Germany — Oklahoma Republican Sen. Jim Inhofe is known as a GOP company man, but the new head of the Senate Armed Services Committee had a mini-maverick moment back in 2011, and it was all about Africa.

Limbaugh, who was misinformed about the nature of the militant group, complained on air that Obama was going after a Christian group that kills Muslims. Inhofe said “my good friend Rush Limbaugh” was all wrong about the LRA.

On Wednesday, the 83-year-old Inhofe was named head of the Senate Armed Services Committee, taking over for Sen. John McCain, who died Aug. 25 after a battle with brain cancer. Inhofe’s leadership of the committee is expected to be a departure from McCain’s tenure, which was marked by a willingness to go against the Republican grain and challenge military leaders with tough questions during Senate hearings.

Inhofe’s questioning of military leaders during Senate hearings over the years has generally been moderate, with little of the McCain-style pushback. But an area where Inhofe has been willing to go his own way is on issues related to Africa and the military’s role there.

“It has disturbed me quite a bit over the years that not many people care about Africa,” Inhofe said from the Senate floor in 2011 as he took on Limbaugh, defending Obama’s decision to send troops to help search for Kony’s group.

In the years since, Inhofe has remained fixated on Africa, even as the Trump administration has looked to shift resources away from the continent. In the months ahead, the U.S. military mission in Africa is likely to face further scrutiny as the Pentagon considers reducing the number of troops there.

The New York Times has reported that the Pentagon is now looking at removing nearly all special operations forces from Niger, where four U.S. troops were killed in a clash in October. That’s part of a broader reorganization aimed at shifting Africa-focused resources elsewhere. In general, the Pentagon is seeking to focus more on competition and countering Russia and China.

Overall, Inhofe — a vocal supporter of President Donald Trump — toes the Republican line. A 2017, GovTrack legislative report card rated him as the Senate’s most conservative member.

But Africa could emerge as a rare point of contention with administration officials and military brass. While the Pentagon contemplates downsizing in Africa, Inhofe wants to build up.

A month after the October ambush in Niger — when some lawmakers were expressing shock that the U.S. had a significant number of troops in that country — Inhofe said the deaths revealed U.S. Africa Command’s fundamental problems.

“The four American deaths in Niger also underscore weaknesses that must be addressed at AFRICOM. It is the only combatant command without dedicated troop resources,” Inhofe wrote in a November op-ed in The Wall Street Journal. “AFRICOM’s headquarters are in Germany, and the U.S. has just one base on the entire continent, in Djibouti, limiting its ability to respond to crises in a timely manner.”

AFRICOM’s requests for additional resources over the years have been “repeatedly denied,” he said, adding that he would work with Trump to get the command what it needed. “AFRICOM is vital to America’s national security, which is why legislators must make it a priority.”

Inhofe was one of AFRICOM’s original boosters, playing a key role in its establishment a decade ago.

The mission went on for years and eventually became something of an albatross for AFRICOM. “It’s over $100 million every year,” AFRICOM head Gen. David Rodriguez said shortly before retiring in 2016.

AFRICOM formally ended the LRA operation in 2017. Kony remains on the loose, but his militant group has been reduced to irrelevance.

In continuing to push for a deeper U.S. commitment to Africa, Inhofe sees AFRICOM’s role as key.

“Trump needs to bring his ‘America First’ approach to Africa,” Inhofe wrote in a January USA Today op-ed. “He needs to set aside the old, outdated mindset of the State Department and do what no other president has ever done — advance American interests by treating African nations as partners.”