New security plan aims for factions to work together 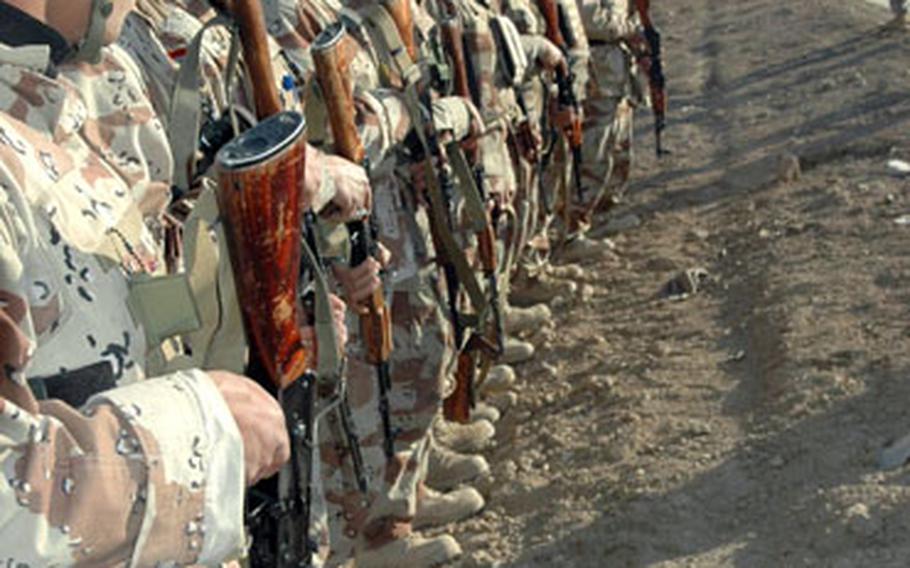 Troops like these scouts from the 9th Iraqi Army Division, based in Baghdad, will be part of the new Iraqi security plan. (By Lisa Burgess / S&S)

BAGHDAD &#8212; The Bush administration has pledged that the Iraqi government&#8217;s new security plan for Baghdad is bold enough to justify boosting troop levels, even when such increases have failed to quell violence in the past.

Both the Iraq government and the U.S. military have a lot at stake in the plan. And there is certainly no doubt in command headquarters here that the pressure is on, from the highest possible levels, for the plan to succeed.

The main effort consists of nine dedicated maneuver battalions, one for each of nine newly created security districts in Baghdad.

The framework was fleshed out by the Iraqi government in December and briefed down the chain to U.S. military commanders throughout the city over Christmas.

The crux of the plan is to boost the number of Iraqi and U.S. troops on the streets providing security and to ease sectarian pressure by uniting three groups that have operated independently of one another, according to officers from the 2nd Infantry Division&#8217;s 2nd Brigade Combat Team.

The groups are the Iraqi army, which is controlled by the Sunni-dominated Ministry of Defense; the National Police, a paramilitary organization governed by the Shiite-dominated Ministry of the Interior; and the Iraqi police, a civilian police force that is also overseen by the Interior, but which usually has significant ties and loyalty to whatever local government is in its home district.

Until now, each of these three groups has had control of different areas of Baghdad. And because they are controlled by rival ministries, they don&#8217;t &#8220;play together,&#8221; some U.S. military officers said.

The new security plan aims to make the three groups play together, whether they like it or not, the officers said.

Five districts are in east Baghdad, and four in west Baghdad, with the Tigris River acting as a divider, said Maj. Christopher Wendland, fire and effects coordinator for the 2nd BCT.

Each district is staffed by a brigade either from the Iraqi army or the Iraqi National Police, and commanded by a one-star general.

How the Iraqi police will be integrated into the plan is still being worked out by the Iraqi government, Wendland said.

To help foster cooperation between the services, if the commander is from the Army, his deputy must be from the police, and vice-versa, Wendland said.

&#8220;We promised a battalion to each JSS as coalition support,&#8221; said Wendland, a 35-year-old from Chicago. That&#8217;s why Bush is pushing to add more troops to Baghdad, the military officers explained.

Groups with a stake in developing the joint security stations have moved full-speed since Christmas to put the plan in motion, the officers said.

The stations&#8217; locations have been determined, according to Maj. Gary Morris, the 2nd BCT&#8217;s officer in charge of force protection.

The U.S. military and their Iraqi counterparts are also finding places to put substations in each district to serve as &#8220;mini-patrol bases&#8221; and help convince the population &#8220;that these are the guys here to keep the neighborhood safe,&#8221; Morris said.

Asked by reporters if units with the 82nd Airborne Division that are deploying to Afghanistan or the 10th Mountain Division that are already in country would be diverted to Iraq as part of the increase, Vician said no.

Vician also said the U.S. military remains committed to maintaining force levels in Afghanistan to continue the coalition&#8217;s mission there.

But recently, the Navy dispatched an aircraft carrier that had been providing close air support to U.S. forces in Afghanistan to the Horn of Africa.