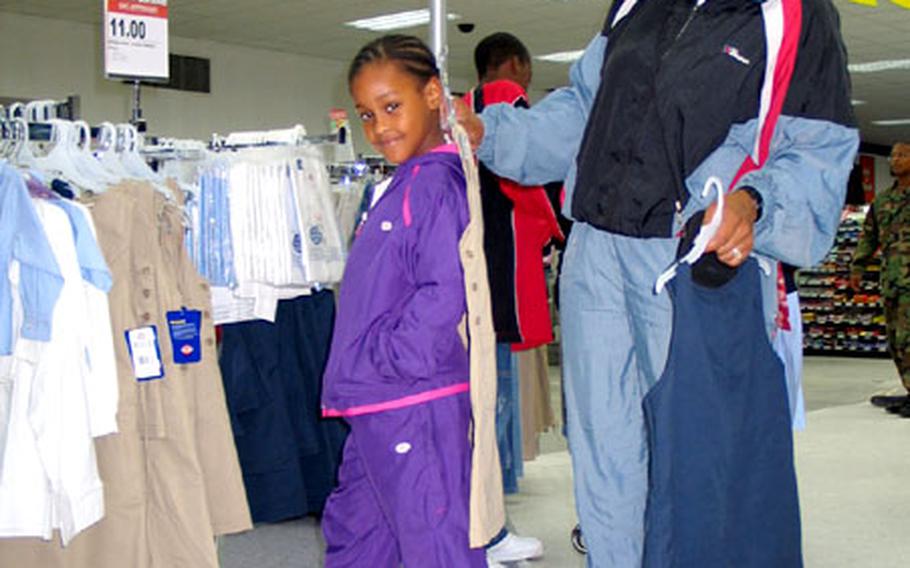 Kimberly Robinson shops for new school clothes for her daughter, Kaylah, 6, at the Bamberg Post Exchange in Germany. Bamberg schools have adopted a school dress code for students. (Photo courtesy of U.S. Army)

For some students in DODDS-Europe, there will be a lot of new things in the new school year.

Department of Defense Dependents Schools students taking advanced placement classes will see changes in the way their grades are tallied. Students at Bamberg Elementary School, Germany, will start the year with a new dress code. And students at Bamberg and elsewhere will join others in a new way of scheduling classes.

Under advanced placement procedures implemented in the spring, students taking AP classes will get weighted grades only if they take the AP exam. DODDS foots the bill for the exams, according to Frank O&#8217;Gara, DODDS-Europe spokesman.

This year, students entering the DODDS system from other schools must have already taken the tests to get the weighted credit.

In Bamberg, high school students will get a new block schedule that increases class length from 50 minutes to 90 minutes. Many schools in the Bavaria District and elsewhere have already adopted block schedules.

The tutorial block gives students the chance to meet with the teacher of a class they may be having problems in and get extra help, he said.

Bamberg Elementary starts the year with a new dress code, where shirts or blouses must be red, white or blue or a pattern with a combination of those colors. No logos or writing is allowed, nor are blue jeans.

&#8220;Strong parent support led to the implementation of the dress code,&#8221; said Cheryl Boujnida, a Bamberg School Advisory Committee member. Polls were mailed to all families with school-age children, and those who didn&#8217;t respond were called at home and queried, she said.

&#8220;Students will be able to focus on academics instead of competing in a fashion show,&#8221; Boujnida said.

&#8220;There will be less competition. There&#8217;s no difference really between a blue or white polo shirt, but there&#8217;s a lot of difference between designer clothing and cheaper brands. It takes some of the pressure off the parents.&#8221;

A handful of other schools already have dress codes, which are up to the discretion of local schools and parent advisory groups, according to DODDS.