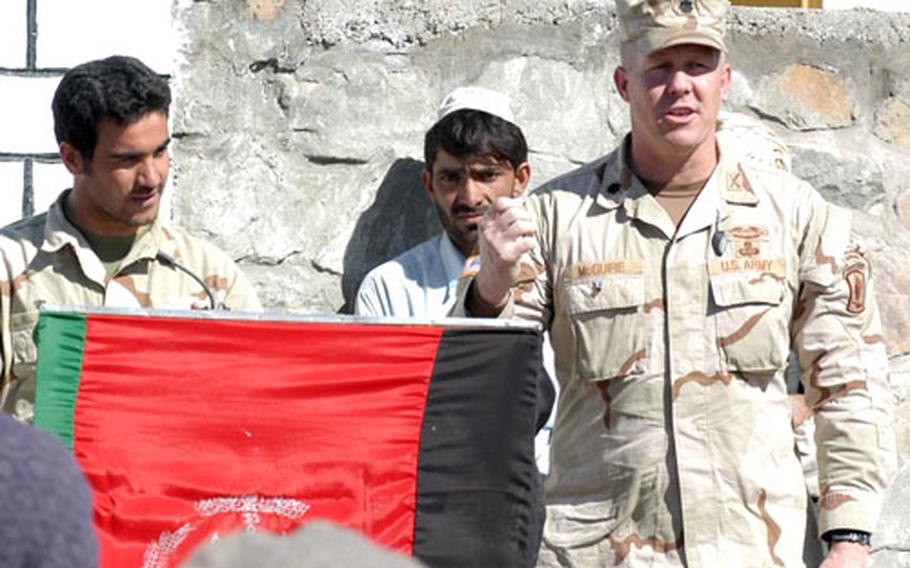 /Lt. Col. Tim McGuire, commander of the 1st Battalion, 508th Infantry Regiment, speaks at a ribbon-cutting ceremony Wednesday for the new school in Zeruk, Afghanistan. The Red Devils are set to leave the province of Paktika at the end of the week. (Kent Harris / S&S)

/Lt. Col. Tim McGuire, commander of the 1st Battalion, 508th Infantry Regiment, speaks at a ribbon-cutting ceremony Wednesday for the new school in Zeruk, Afghanistan. The Red Devils are set to leave the province of Paktika at the end of the week. (Kent Harris / S&S) 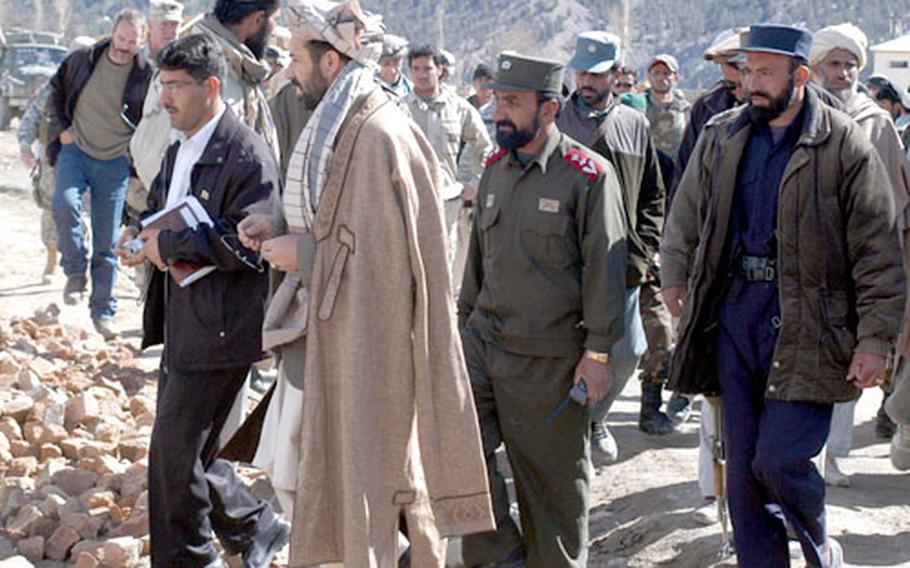 Gulab Mangal, the governor of Paktika province, arrives with entourage in tow for a ribbon-cutting ceremony for a new school in Zeruk, Afghanistan, on Wednesday. (Kent Harris / S&S)

ZERUK, Afghanistan &#8212; A year ago, this village in the mountains in the northeast part of Paktika province didn&#8217;t have a school.

That changed Wednesday with a ribbon-cutting for the new facility: a bright, white single-story adobe structure a stone&#8217;s throw from the community&#8217;s police station. The Vicenza, Italy-based battalion had a lot to do with finishing the school, one of several projects it funded in the area. A health clinic is under construction near the police station, a fortresslike structure that also has a new barracks inside.

But those looking for a sign of how things have changed in the province since the Red Devils arrived late last winter might want to compare how they made the journey to Zeruk from their forward operating base.

On a convoy in April, elements from the battalion, along with a few soldiers from Battery D, 319th Field Artillery Regiment, made the mostly torturous drive on the rough dirt track that passes for a road connecting Orgun and Naka. The Humvees were supported in the air at times by A-10 Warthogs, Apache AH-64 helicopters and Marine Huey helicopters. The soldiers met up with a few Afghan policemen who were out and about.

But Wednesday&#8217;s convoy required a program to figure out who was involved. There were elements from 1-508, as well as the 10th Mountain Division&#8217;s 2nd Battalion, 87th Infantry Regiment that is taking over duties in the province. But there were also vehicles filled with Afghan National Army soldiers and others crammed with Afghan National Police officers. There were a few white vehicles assigned to the United Nations, a small contingent from the provincial reconstruction team from Sharona and an official from the State Department. There weren&#8217;t any artillerymen or helicopters and planes providing support, but two specialty vehicles from the 391st Engineer Battalion led the way, looking for roadside bombs.

Of course, some of the extra presence Wednesday had to do with the fact that the Afghan governor of the province, Gulab Mangal, was riding in the convoy. But American soldiers constantly work with elements from either the Afghan army, police force (or both) these days &#8212; regardless if a governor is around.

As Lt. Col. Tim McGuire, the Red Devils commander, told village residents during the ribbon-cutting ceremony: &#8220;We believe we are assisting our Afghan brothers in a very important fight. I want to thank you for letting us serve beside you.&#8221;

McGuire was one of a series of speakers, including the governor, who addressed villagers. Many of the youngsters who will use the school when sessions resume in March paid attention for a while. But their attention never wandered for long away from the American soldiers and those with them on the convoy.

The dirt road could change under the 2-87&#8217;s watch. An array of road projects is under way in the province and the stretch from Orgun to Zeruk is on a list of future projects. Before that road is constructed, though, the village should have a cobblestone street &#8212; much like the one that has made Orgun the envy of surrounding towns.

Geraci, whose company has been responsible for patrolling the area as well as monitoring various projects, said the new school should boost local villagers&#8217; faith in their leaders and the Afghan government.