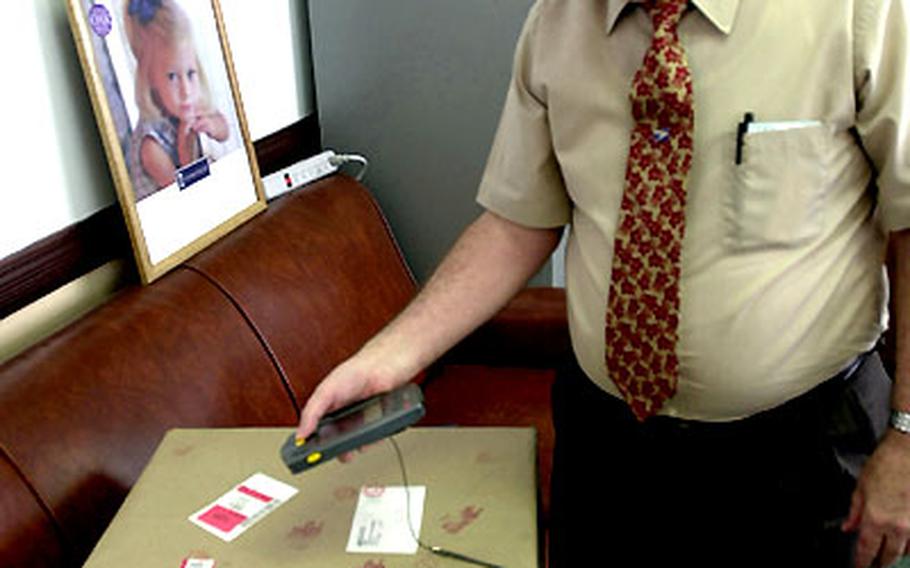 Greg Mackessy, director of postal operations in South Korea, shows how one new type of scanner will be used to track certain types of accountable mail coming into country. (Jeremy Kirk / S&S)

&#8220;We were looking for a way to improve our manpower utilization as well as improve the tracking of accountable mail in theater,&#8221; Mackessy said.

Previously, postal personnel wrote down accountable mail tracking numbers on U.S. Postal Service forms, a time-consuming and error-prone process, Mackessy said. That system made it more difficult to find out at which point a package may have been lost.

Now, postal clerks will be able to check, for example, if a missing package bound for Camp Casey made it to Gimpo. If it did, the officials know it went missing between the airport and the camp, Mackessy said.

&#8220;It will be almost instantaneous,&#8221; Mackessy said. Previously, Express mail label receipts were mailed to San Francisco for input into a database.

Mackessy said his office is looking to see if the scanners can be configured to scan all types of accountable mail, which would include certified, insured and registered mail.

Other postal improvements include an X-ray machine at Yongsan Garrison&#8217;s post office, purchased with force protection funds. The machine allows officials to scan mail that may be suspicious before calling explosive ordnance disposal, Mackessy said. Four other smaller X-ray machines have been placed in other Army post offices in South Korea, Mackessy said.

Sometimes battery-powered items in packages will turn on in transit. Vibrating packages make postal people nervous, and EOD and other emergency officials are called four or five times year for inspections, Mackessy said.

Mackessy said the post office is also advising people not to mail items such as Japanese swords to South Korea, as the customs office has been seizing them. It is against the rules to mail similar weapons, too, he said.