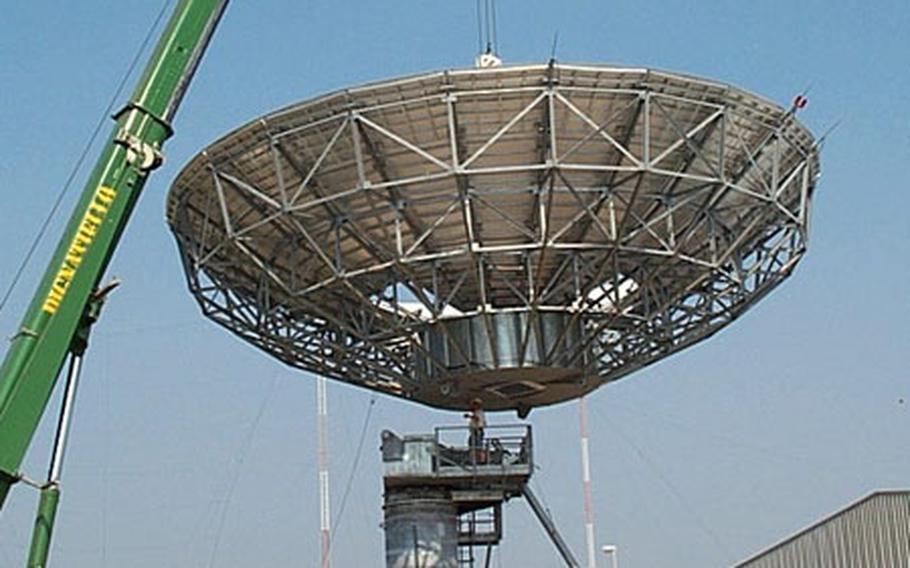 An 85,000-pound satellite dish antenna is lowered Thursday into position at the Naval Computers and Telecommunications Area Master Station Europe, Central&#39;s satellite communications facility. The dish will be part of the Department of Defense&#39;s new Teleport program. (D.J. Henderson / Special to S&S)

NAPLES, Italy &#8212; A 50-foot satellite dish being installed at the Naval Computer Telecommunications Area Master Station Europe will someday help deployed troops do their job more easily and allow them to better keep in touch with loved ones.

Contractors and military personnel at the site installed the 85,000-pound Vertex dish antenna last week as part of the Defense Department&#8217;s $16 million Teleport Generation One program.

The program, expected to be online later this year, will provide deployed forces with secure and unsecured telephone systems, classified and unclassified Internet access, and video teleconferencing capabilities.

The Teleport program is an extension of the military&#8217;s communication Standardized Tactical Entry Points system. Lago Patria in Naples is the only Navy-run STEP site.

According to the Defense Information Systems Agency Web site, the Teleport program will be installed in three phases. Ultimately, it is expected to &#8220;improve communications for deployed forces by giving them access to commercial satellite bandwidth,&#8221; according to the Web site.

Existing satellite terminals in the Ramstein/Landstuhl, Germany, area are also being upgraded in the first phase of the program.

The program&#8217;s second phase, which is to run fiscal years 2004 and 2005, is scheduled to provide DOD officials with additional satellite communications in three different frequency bands. During this phase, existing military high frequency radio communications will be integrated into Teleport.

The final phase will run from fiscal years 2006 to 2010. This phase will include the insertion of advanced extremely high frequency systems, advanced narrowband systems, and the advanced wideband system, as well as upgrades to equipment.

According to the DISA Teleport information Web page, the last two phases may change based on costs, system needs and even the introduction of system alternatives.