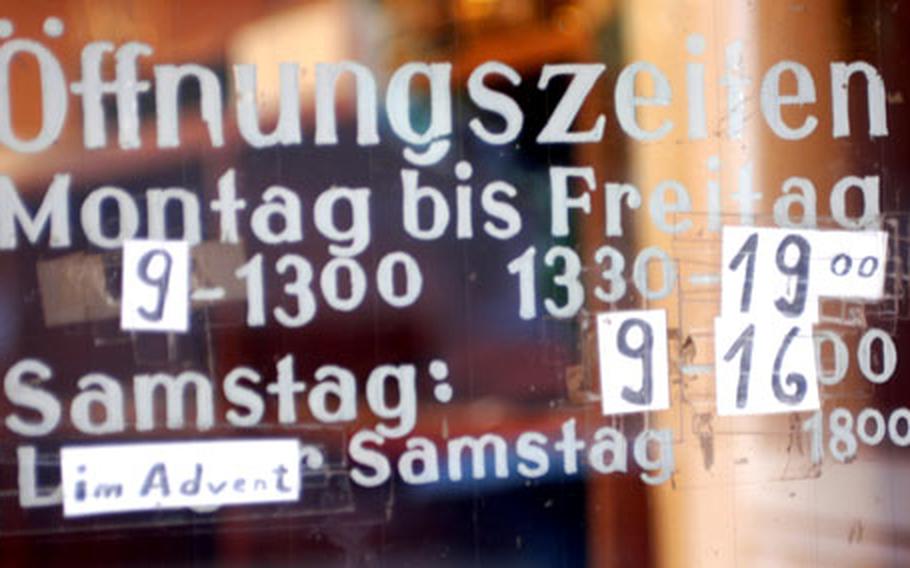 New rules set by Germany&#39;s states will soon give shopkeepers in most of the country the opportunity to stay open many more hours than a 50-year-old federal law allows. (Nancy Montgomery / S&S)

HEIDELBERG, Germany &#8212; Americans can buy a car Saturday night, a new suit on Sunday and a rib roast almost anytime. But Americans moving overseas soon learn that shopping traditions vary as much as the cuisine. Those living in Germany have learned to deal with what are considered the most limited shopping hours in Europe.

For more than 50 years, most shops in Germany have been required to close by 6, 7 or 8 p.m. weekdays, Saturday afternoons and all day Sundays.

Under a recent constitutional change, stores throughout Germany will be allowed to stay open longer &#8212; up to 24 hours a day, Monday through Saturday. And in some cases on Sunday.

The authority to set hours is now in the hands of Germany&#8217;s state governments instead of the federal Ladenschlussgesetz, or store-closing law.

Earlier this month, Berlin municipal officials voted to make the capital the first city to adopt longer hours. Beginning Dec. 1, stores can remain open 24 hours a day during the week and 1-8 p.m. on the four Sundays before Christmas. Other places are expected to follow suit.

In addition to the state of Brandenburg, where Berlin is located, at least two other states are expected to change the rules in time for Christmas: North Rhine-Westphalia in the west and Saxony-Anhalt in the east, according to The Associated Press.

The same is expected in Hessen, which includes the military communities of Wiesbaden, Hanau and Darmstadt, although no date has been set.

Officials of Rhineland-Pfalz &#8212; which includes Kaiserslautern, and Baumholder &#8212; are expected to extend opening hours to 10 p.m. Monday through Saturday. Shops would remain closed on Sundays except for four Sundays each year.

Germany&#8217;s rules regarding shopping hours date to 1956 and, despite numerous challenges, have endured with only slight changes. Unions and religious leaders have opposed changes, saying the restrictive hours protect workers and quality of life. But retailers say the limited hours hurt sales and send people to other countries to shop.

In Bavaria, the most conservative and Roman Catholic state and home of Schweinfurt, Bamberg, W&#252;rzburg, Garmisch and Grafenw&#246;hr, no change is planned.

In Baden-Wurtemberg, which includes Heidelberg &#8212; site of U.S. Army Europe headquarters one of Germany&#8217;s longest pedestrian-only shopping streets &#8212; the state government is expected to change the rules in March or April, said Klaus Kamradek, chief of the city&#8217;s trade office.

And in Stuttgart, the Local Retail and Trade Federation says it&#8217;s expected that shops will be allowed to operate 24 hours daily Monday through Saturday. But the number of Sundays in which shops were allowed to be open will be reduced from four to two.

The new legal operating hours are no guarantee that shopkeepers will change their longstanding traditions and actually stay open longer. Earlier easing of the law in 1989, 1996 and 2003 failed to translate into more sales, according to Business Week.

Several retail groups said they would experiment with opening hours in the next few weeks, and larger chains said they expected to close at 10 p.m, while others said they&#8217;d stay open past 8 p.m. only Thursday to Saturday, according to the magazine.

&#8220;One should have respect,&#8221; added Joachim Niedereicholz, a retired Mannheim University marketing professor who favors longer opening hours every day except Sunday.

Stars and Stripes&#8217; Moni Koch contributed to this report.