New rule forces some base workers to accept changes to pay, benefits or lose jobs 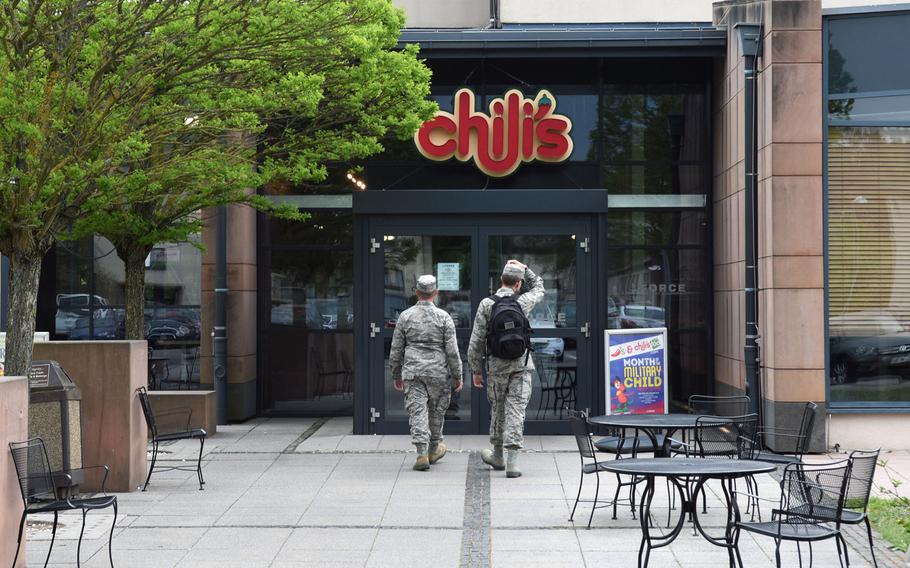 Buy Photo
Airmen walk into Chili's at Ramstein Air Base, Germany, on April 25, 2018. Chili's is among the establishments on base that employs third-country nationals. Their employment status recently changed; now they fall under the host nation, non-U.S. employment program. (Jennifer H. Svan/Stars and Stripes)

Buy Photo
Airmen walk into Chili's at Ramstein Air Base, Germany, on April 25, 2018. Chili's is among the establishments on base that employs third-country nationals. Their employment status recently changed; now they fall under the host nation, non-U.S. employment program. (Jennifer H. Svan/Stars and Stripes) 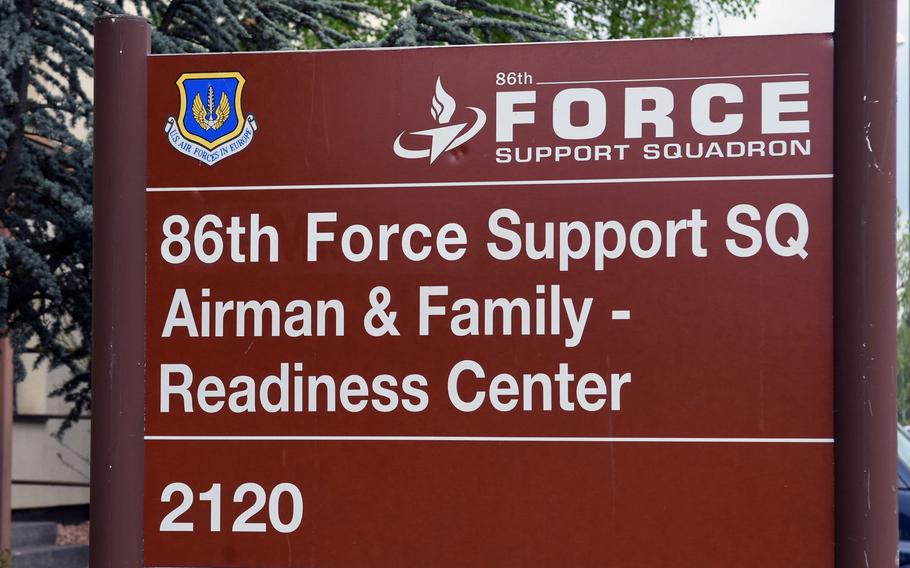 Buy Photo
A sign denotes the headquarters for the 86th Force Support Squadron on Ramstein Air Base, Germany. The squadron recently revamped its employment program for third-country nationals, to address a worker's compensation claim that was denied by the Air Force. (Jennifer H. Svan/Stars and Stripes) 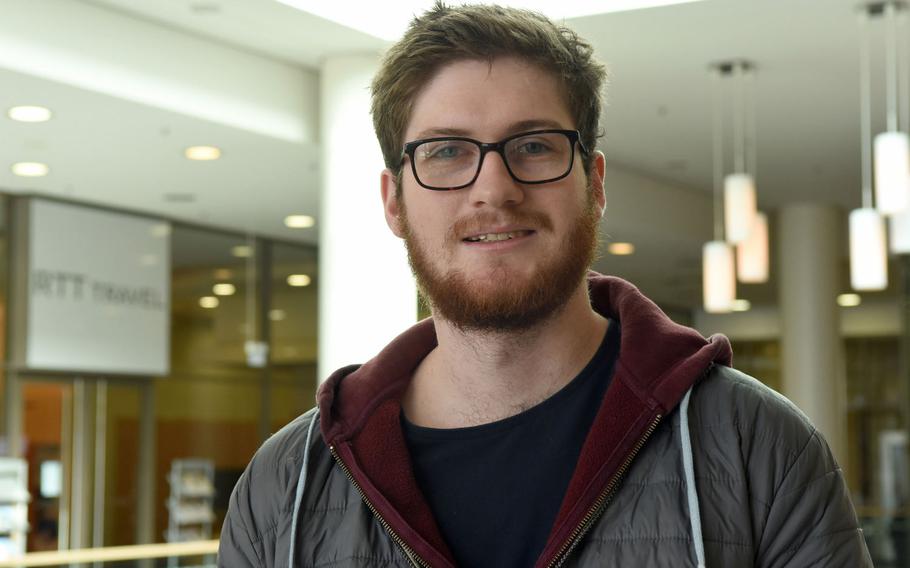 Buy Photo
Mark Gregory, 25, a citizen of the United Kingdom, worked at Chili's on Ramstein Air Base, Germany, for nearly four years until leaving this year. He was disappointed with how the 86th Force Support Squadron handled the transfer of third-country nationals into the host nation employment program. (Jennifer H. Svan/Stars and Stripes)

RAMSTEIN AIR BASE, Germany — A change in employment status here for dozens of third-country nationals — some of whom are also military spouses — means they’ll receive more benefits and job security, but some will take home far less money.

Ramstein is believed to be the first base overseas to convert services jobs held by foreign employees to the host-nation or non-U.S. employment program earlier this year. At least one other base in Germany is considering the same conversion.

The change reduces the Air Force’s liability to workers hurt on the job while providing them with German health coverage, base officials said.

For years, U.S. military bases overseas have employed third-country nationals — who are citizens neither of the U.S. nor the country in which they work — through the nonappropriated fund, or NAF. The jobs are mostly in the service industry but also include marketing and other positions.

At Ramstein, a NAF job often came with perks afforded to their U.S. colleagues, such as commissary shopping and cheaper gas on base. The wages were often tax-free, depending on one’s home country tax rules.

But the positions also didn’t come with health insurance and retirement benefits.

A workers’ compensation claim, filed by a third-country national employee more than two years ago and denied by the Air Force because the worker was not a U.S. citizen, triggered the overhaul of positions at Ramstein, said Lt. Col. Joel Harper, 86th Airlift Wing spokesman.

The claim is still under review by NATO, said Harper, who declined to provide details since the claim was still pending.

More benefits, job security and taxes The 86th and 786th force support squadrons employ about 1,300 NAF workers, a small percentage of whom are third-country nationals.

It also means more of their earnings — now in euros — will be taxed by the German government.

The maximum rate is 42 percent, but “only for top earners,” said Wolfgang Krueck, chief of the non-U.S. personnel program at Ramstein. Most of the employees converted will probably see a 15 percent or 20 percent income tax on average, Krueck said.

The third-country nationals will also have to give up commissary shopping and other privileges associated with a U.S. ID card, unless they’re already eligible for those as a military or civilian spouse.

'It was very sudden' “Our intent going into this was to retain as many people as possible,” said Lt. Col. Renee Thuotte, 86th Force Support Squadron commander. “I think the majority of our teammates would say this is absolutely a great decision for them.”

But Rob Finnimore, 52, the operations manager at Chili’s, says he felt he had to accept the converted position at Ramstein, despite facing an estimated 50 percent loss in take-home pay.

“I would need to give three months’ notice on my apartment,” he said. “I have various commitments here after six years, so obviously I needed to accept.”

He didn’t have three months to decide.

Employees received a letter on Jan. 31, informing them they had 12 days to accept the converted position or lose their job, officials said.

“It was very sudden,” Finnimore said. “It felt like it was rushed.”

Thuotte said two-weeks’ notice is typically what employees give before they vacate, “so it’s very similar to how much time the employees are notifying the employer of a transition as well.”

Finnimore came from the United Kingdom to Germany six years ago to work on base because “the money and conditions were very good.”

It was good mostly because it was tax-free: Finnimore legally didn’t have to pay U.K. income taxes since he was living abroad, he said. And he chose not to pay for health insurance or a retirement plan, allowing him to pocket about $56,000 a year.

As a part of a special contract for managers, Finnimore said, he’s been told he’ll get paid only for 35 hours a week with no differential for working nights, Sundays or on German holidays.

He’s also losing his banking, post office, shopping, car registration, tax-free shopping privileges — “everything that I was told I was entitled to when I came here six years ago,” he said.

Thuotte acknowledged that “everybody has individual situations and circumstances” that may not have made taking a position on the non-U.S. side “the most desirable option.”

“That’s why nobody was forced to convert,” she said. “But a job was made available should they choose to take it.”

Employees will now have guaranteed hours, she said, something they didn’t have before.

One third-country national approached her at an event, Thuotte said, and told her that he was thrilled to not have to pay out of pocket for retirement and other benefits that he now receives under the new system. “He said, ‘I can be a real citizen,’” she said.

'No compassion at all' Mark Gregory, 25, said for his third-country national colleagues at Ramstein, the new employment classification is a mixed bag “in terms of the deal we’re getting.”

But most are unhappy with the way management handled the conversion, he said.

Gregory, an English citizen who grew up around Ramstein, decided not to accept a non-U.S. position at the base.

“There was no real time to sit down, think about it and discuss it,” he said.

There were meetings with employees to explain the changes, but Gregory said it wasn’t enough.

“It came out of nowhere ... there were rumors going around forever but” no one in leadership addressed those rumors until the decision was announced, he said.

Samantha Schafer-Allen, an English citizen, decided to leave her job as an accounting technician at Ramstein’s Woodlawn Golf Course. She would have had the same title but about half the hours, she said, and no job description.

“They could have me cleaning toilets, for all I know,” she said.

As the wife of a retired servicemember, Schafer-Allen already has health insurance and retirement benefits.

“I would be paying for something I don’t need, and also on top of that, having to pay German taxes, whereas before, my pay was going on my husband’s tax return,” Schafer-Allen said.

She said not all Americans working for the force support squadron at Ramstein had health insurance, since it wasn’t mandatory.

“For whatever reason, they’re singling out the NATO people … and trying to now force a German (local national) position on them, to make sure they have coverage,” she said. “But they’ve also pulled people like myself into that same boat, who don’t need health insurance, because I already have it.”

Difficulties at Spangdahlem Schafer-Allen decided to join her husband at Spangdahlem Air Base, where he works as a civilian, but she’s been unable to find work.

She blames it on changes Spangdahlem has made that she says make it harder for third-country nationals.

Spangdahlem in March began directing that third-country nationals were eligible to apply only for non-U.S. or local national jobs, base officials said.

Schafer-Allen was told to apply through the German Civilian Personnel Office, but that office does not list any host nation jobs with the force support squadron, she said.

“The change has completely impacted my entire life, as I moved to the Spangdahlem area to bring my family back under one roof again,” Schafer-Allen said. “Now, I am living in an area where I can’t apply for work, which means lost income. Just last week I had to sell my car and my future here is now uncertain.”

Whether that means less job opportunities for third-country nationals in service jobs for the wing at Spangdahlem is unclear. Base officials said managers will still have the option to fill a position as a U.S. or local-national position, depending on workforce needs.

As of last month, the base employed four third-country nationals in U.S. NAF positions and 12 in local national jobs, said Capt. Andrea Valencia, spokeswoman for the 52nd Fighter Wing at Spangdahlem.

She said the wing was still considering whether to convert the remaining third-country nationals in U.S. jobs to local national positions, similar to what Ramstein has done.

At Ramstein, third-country nationals may still apply for all NAF jobs with the 86th Force Support Squadron, officials said, with hiring determined by qualifications and needs of the Air Force, not nationality.