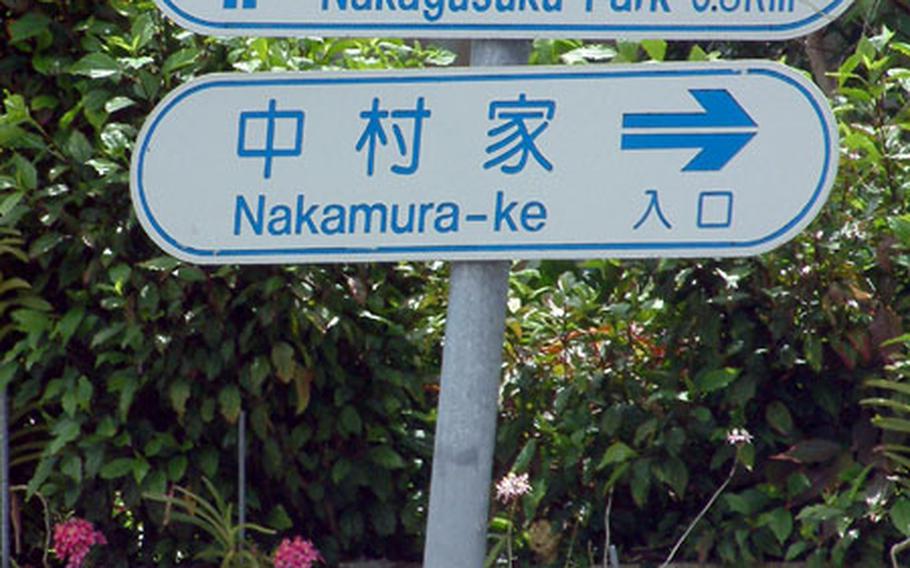 To aid foreign visitors, signs such as these on Okinawa will be changed to better identify historic landmarks. Instead of Nakamura-ke, the bottom sign will read Nakamura-ke Old House, directing a visitor to the Nakamura House, a traditional farmer&#39;s home that survived the Battle of Okinawa during World War II. (David Allen / S&S)

NAHA, Okinawa &#8212; Okinawa road signs are being changed to make them easier to understand for foreigners, especially Americans.

Within five years, the prefecture will change 1,378 signs, switching the Romaji, or Roman lettering, on the signs to more accurately reflect place names, according to the Okinawa General Bureau, a Japanese governmental agency in Naha.

&#8220;There had been some confusion concerning the English signs because of some ambiguous definitions,&#8221; said Kuniaki Higashihama, the chief of the bureau&#8217;s Traffic Affairs Office.

Higashihama said the new signs will cost about $1.28 million.

&#8220;Although existing bilingual road signs were meant to provide easy-to-understand information to international visitors, there have been many complaints that signs are inconsistent and confusing,&#8221; he said.

The bureau formed a group made up of Japanese university professors, court interpreters, and native English speakers on Okinawa who studied the issue for three years. The group also conducted a survey last November of readers of Stars and Stripes for input; 98 people responded.

Higashihama said not all the new signs will be easier for English speakers to understand.

For example, the sign for Okinawa Peace Prayer Park, the site in southern Okinawa where the Japanese Imperial Army made its last stand during the Battle of Okinawa and where the names of all the people killed in the battle are inscribed on black granite walls, will be changed to &#8220;Heiwakinen Memorial Park.&#8221;

Heiwakinen means &#8220;peace prayer&#8221; in Japanese. The change will enable Okinawans to understand foreigners when they ask for directions, Higashihama said.

&#8220;The new English signs are products of a happy medium,&#8221; he said. &#8220;If the name of the site or facility was in English only, such as the Peace Memorial Park, a resident who does not understand English would not be able to recognize the place when a visitor asked for a direction to the park.&#8221;

Other changes will be easier to understand.

&#8220;That is the Romanized Japanese name for a Chinese garden in Naha, but it does not provide any real information to an English-speaking visitor,&#8221; Higashihama said.

Other changes include using the word street. For example, Kokusai-dori, the popular shopping area in Naha, will be posted as Kokusai Street.

And on many signs the Romanized names that cause the most head-scratching among foreigners will be simplified. &#8220;Ozato-jo-shi-koen,&#8221; for example, will be listed as &#8220;Ozato Castle Site Park.&#8221;

Higashihama said that more pictorial information would be added to some signs to make them &#8220;instant visual guides.&#8221;