New retirement options for servicemembers could save cash for military 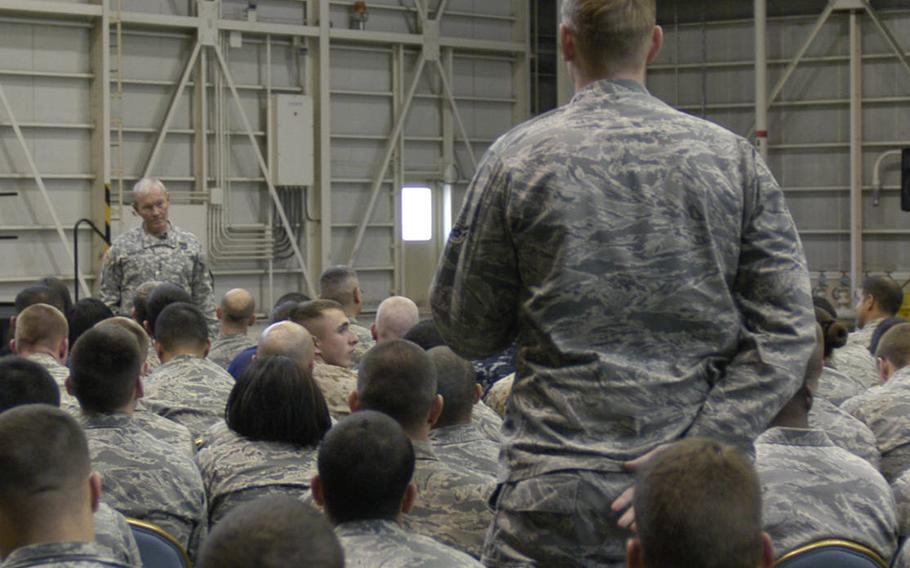 Gen. Martin E. Dempsey, chairman of the Joint Chiefs of Staff, listens to a servicemember's question during a visit Thursday to Yokota Air Base, Japan. Dempsey told servicemembers that there shouldn?t be additional large-scale reductions in the numbers of forces stationed overseas. Eric Guzman/Stars and Stripes ()

Gen. Martin E. Dempsey, chairman of the Joint Chiefs of Staff, listens to a servicemember's question during a visit Thursday to Yokota Air Base, Japan. Dempsey told servicemembers that there shouldn?t be additional large-scale reductions in the numbers of forces stationed overseas. Eric Guzman/Stars and Stripes () 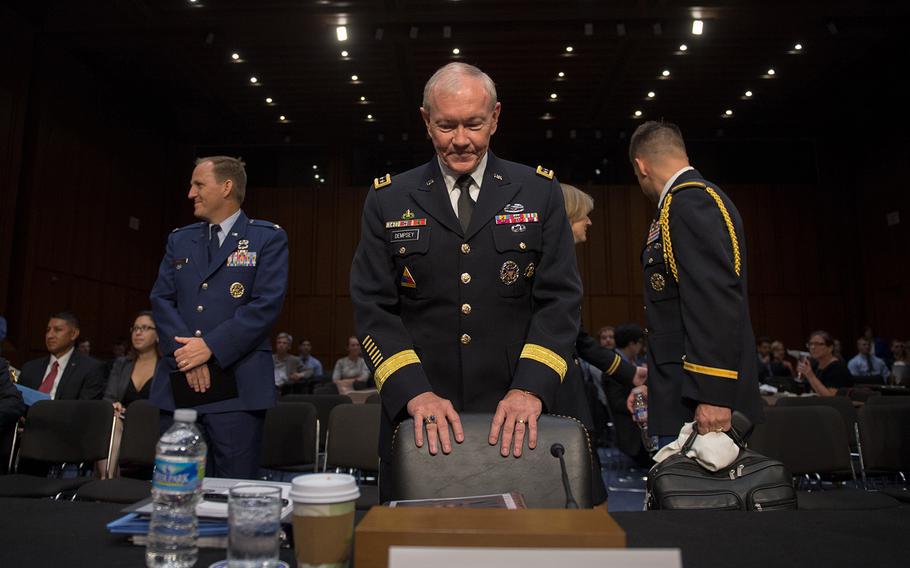 YOKOTA AIR BASE, Japan — Military enlistees could soon be offered a range of new retirement options as the Defense Department tries to get a handle on a retirement benefit fund that is spiraling out of control.

Pentagon data show there are more than 2 million military retirees and survivors who were paid $52.4 billion from the Military Retirement Fund during the 2012 fiscal year. A report by the Department of Defense Office of the Actuary suggests that spending will likely double within 20 years.

That level of spending, combined with the rising cost of servicemembers’ pay and benefits, is too high, Chairman of the Joint Chiefs of Staff Gen. Martin Dempsey told an audience at Yokota Air Base earlier this summer.

“Manpower costs are becoming overwhelming,” he said. “They will overwhelm modernization and training if we are not careful.”

The general said he doesn’t want to be known for “taking a machete” to servicemembers’ paychecks, but, “I don’t want you being the most well-compensated military on the planet that doesn’t train,” referring to other possible cost saving measures.

If you are a pilot, you join the Air Force to fly, he said. “And if I got to park that [plane] … how long are you going to hang around?”

This year, the Air Force has made deep cuts to flight hours in an effort to save money due to mandatory budget cuts imposed by Congress.

In an effort to bring retirement costs down, the 2013 National Defense Authorization Act established a Military Compensation and Retirement Modernization Commission that will make a comprehensive review of all forms of military pay and benefits, according to DOD spokesman Lt. Cmdr. Nate Christensen.

The commission is expected to make recommendations on how to fix the system to President Barack Obama and Congress by May 2014.

But Dempsey assured the Yokota airmen that personnel serving today won’t be negatively affected by any potential retirement changes.

“I’m talking to a group of individuals who will not be affected by that,” he told them. “…if someone came into the service with an expectation, a commitment to a particular retirement program, that should be honored.”

Whatever changes are made, today’s servicemembers will still be able to retire at 20 years, Dempsey said, but noted that not many servicemembers stay in uniform that long.

Based on trends, only about 17 percent of servicemembers stay in for 20 years, he said.

While those currently serving will still have the option of retirement at 20 years, the new enlistees could see retirement programs with benefits after 10, 20 or 30 years of service, he said.

“We want to make it so individuals have more choice at the front end,” he said. “If you are a young fellow you might be able to say I would like that program better than the one I’ve got.”

A cost-saving option might be to offer active-duty troops full retirement benefits only after 30 years’ service with mandatory retirement at 40 years, Johnson said.

“Health is better than it was and many could serve in valuable roles,” he said, referring to those who opt to stay in the military longer.

Todd Harrison, a senior fellow with the Center for Strategic and Budgetary Assessments, said retirement should be assessed along with other forms of compensation.

A survey that he conducted of 2,600 servicemembers last year, shows most place a high value on increases to their base pay and tax-free shopping at military exchanges, but that they underestimate the value of free medical care, he said.

“Military compensation is the primary tool by which we induce people to serve in an all-volunteer force,” he said. “So any changes should be made based on the best available evidence of how it will affect the force.”

But Air Force, Airman 1st Class Darrell Kennedy, 22, a supply specialist working at Yokota said retirement benefits and health care are more important to him than increases in base pay.

He joined the Air Force two years ago with the goal of making it a career and serving for 20 years.

Under no circumstances should the government renege on promises made to serving troops or veterans, said Kennedy, whose father was medically discharged from the Army after hurting his back when his tank drove into a ditch.

Another Yokota servicemember, Airman 1st Class Kyle Neukam, 22, of Anchorage, Alaska, also is hoping to serve 20 years and retire with full benefits. Neukam’s father is also a disabled veteran, but, he said, the life of a military retiree appears to be a good one.

“My Dad and his friends are all retired and living in Alaska and they go fishing all the time,” he said.

Neither of the young airmen was enthusiastic about serving 30 years to be eligible for retirement.

“Thirty years is kind of a long time,” Neukam said. “This job is stressful. Could you imagine an Army guy getting deployed for 30 years? That could really mess with somebody’s mind.”

Dempsey said the military retirement system won’t change overnight, and he noted that veterans’ groups will be unwilling to support changes unless they see a benefit for military retirees.

“It will be a very deliberate process,” he said but, “I do think we need to change.”