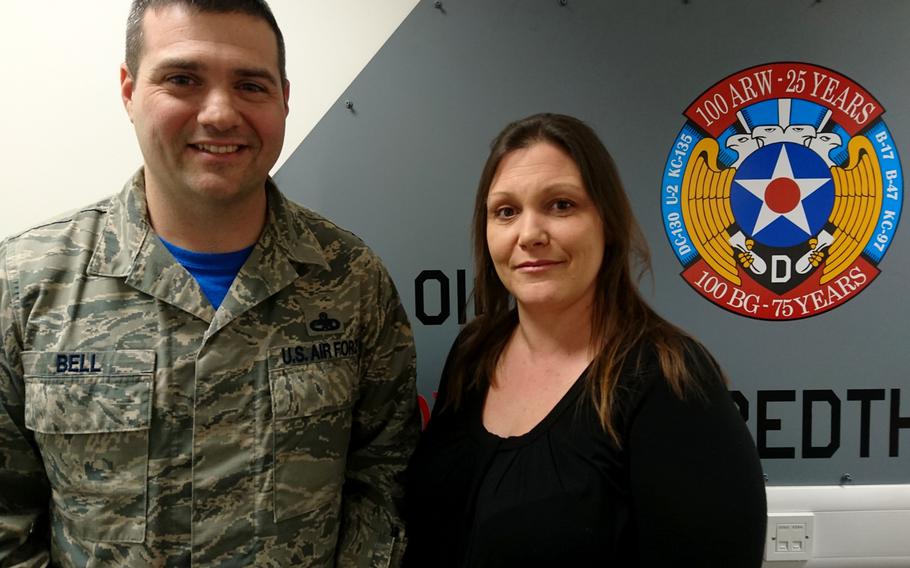 Buy Photo
Mia Tobitt and Master Sgt. William Bell, of the 100th Air Refueling Wing, in their workplace at RAF Mildenhall, England, Feb. 1, 2019. Their pitch for a new respirator with video feed and two-way communications was selected as one of six finalists for Spark Tank 2019. (William Howard/Stars and Stripes)

RAF MILDENHALL, England — Maintenance crews may soon have a safer way to inspect fuel tanks and tight crawl spaces inside tanker planes, instead of just knocking around in the dark.

A respirator mask idea conceived by Mia Tobitt and Master Sgt. William Bell, of the 100th Air Refueling Wing, was announced as one of six finalists out of 320 submissions in the Air Force-wide Spark Tank 2019 competition, where airmen pitch their ideas like an entrepreneur would to a venture capital firm.

Their idea adds audio communication and video feedback to the full-face respirator mask used by mechanics while checking the insides of aerial refueling planes. Two-way communication would boost safety while saving time and money for the Air Force, Tobitt said.

“KC-135 airmen spent 33,000 hours in fuel tanks last year and that’s a highly explosive and highly dangerous environment they’re in,” said Tobitt, a continuous process improvement manager for the squadron. “If we can cut down just one of those trips in and out per job, you’d being looking at thousands of man-hours that could be saved.

“If we were to extrapolate that across the entire air fleet, because there’s no reason this couldn’t be used on other airframes, then it seems logical that there could be really significant savings.”

With the integrated communications respirator, mechanics will be able to have an immediate conversation with their supervisor, instead of knocking on metal to communicate.

“It’s extremely ineffective and it could take you 20 minutes to crawl back into the hole you need to be at and realize you’re not sure what part to inspect,” Bell said. “What would take us five seconds in a normal conversation, then they waste another 20 minutes crawling back out, getting the information they need and crawl back in because most of these spaces two people can’t go in together.”

The constant video feedback will also alert colleagues outside in case of an emergency.

“If something were to go wrong in the tank it could be quite a few minutes before the attendant even finds out,” Bell said. “I’ve spent many 12-hour shifts inside of a tank and I remember times when I wouldn’t talk to somebody for two hours or three hours at a time.”

Tobitt and Bell said they’ve already been approached by other Air Force units but are still putting together the first working prototype.

“All of this technology exists separately but the biggest hurdle is right now we haven’t found a company that’s consolidated it all into a single unit,” Bell said. “Because it goes into hazardous environments it has to be intrinsically safe.”

Tobitt and Bell are preparing to appear before a board of Air Force senior leaders at the Air Force Association Air Warfare Symposium on Feb. 28 in Orlando, Fla., where they will compete for a championship cup to display at their unit.

All six Spark Tank finalists will a receive funding and other resources to implement their innovations, according to the Air Force.