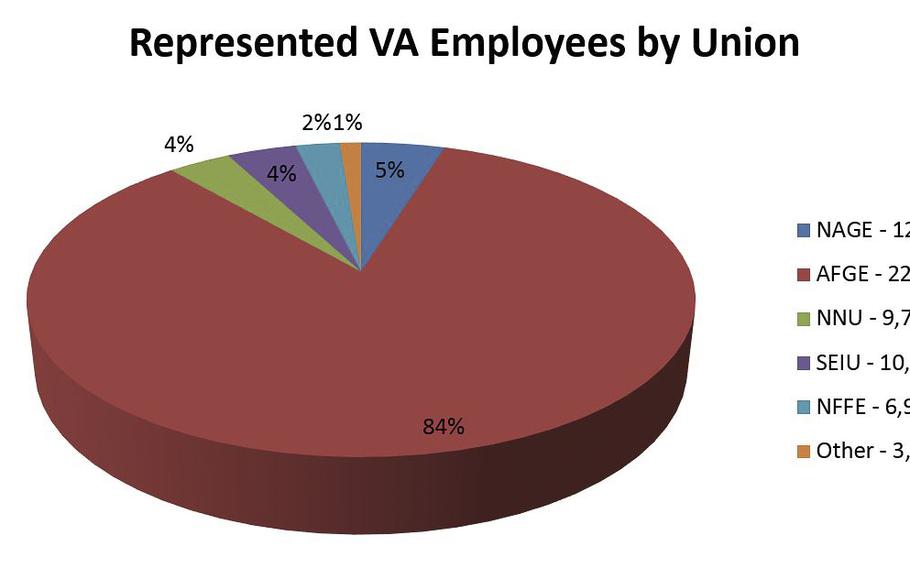 WASHINGTON — There’s a new effort in Congress to place restrictions on union activities for employees at the Department of Veterans Affairs, following scrutiny over the amount of time workers at the agency spend on union affairs.

Rep. Jodey Arrington, R-Texas, introduced legislation Thursday that would prohibit employees from spending more than 50 percent of their work time on union activities. Employees who work directly with patients would be further limited to 25 percent.

The Government Accountability Office released findings last month that the VA doesn’t accurately record the amount of time employees spend on union business. Arrington especially took issue with a finding that 346 employees spent 100 percent of their work time as union representatives in fiscal 2015.

“It is outrageous and unconscionable that VA employees, especially employees who provide much needed health care services, are spending the majority of their time conducting union business instead of fulfilling the duties they were hired to do,” Arrington said Thursday in a written statement.

Arrington is a member of the House Committee on Veterans’ Affairs. The legislation gained the support of Rep. Phil Roe, R-Tenn., who is the committee chairman.

A release about the legislation states it would also “put an end to forcing VA employees to pay union dues” and give them the option to opt out of their unions at any time.

Tim Kauffman, a communications specialist with the largest VA union – the American Federation of Government Employees – said federal employees are not required to join. Members are allowed to opt out now only during their renewal period.

The new legislation comes at a time when the union is fighting back against another bill that they see as an attack on the due process rights of VA employees. A bill passed by the House Committee on Veterans’ Affairs on Wednesday aims to make it easier to fire poor-performing VA employees, and it does away with employees’ option for a grievance process. Roe, who pushed to do away with the grievance process, said they delay action against employees and can take nearly a year to complete.

Marilyn Park, a legislative representative with the American Federation for Government Employees, said that measure, along with the recent focus on how much time employees spend on union activities, is “union bashing.”

Two House subcommittees held a hearing Feb. 16 about the Government Accountability Office findings on how the VA tracks union time. Kimberly Perkins McLeod, director of VA labor management, said the department was rolling out a new method to record time spent on union activities that would be complete in summer 2018.

During his Feb. 16 testimony, David Cox, president of the American Federation for Government Employees, said lawmakers were using the hearing to attack unions.

“The very right of federal employees to join and be represented by their unions seems to be in question,” he said.

Government Accountability Office initiated the review into how much time VA employees were spending on their unions because it has “received increased scrutiny in recent years,” the report states.

The VA is the second-largest federal agency behind the Defense Department, and more than 250,000 of its nearly 370,000 employees are union members.

The number of hours spent on union activities in 2012 per VA employee was 4.28, according to the Office of Personnel Management report. The average for all federal agencies was 2.81 hours per employee.

“The mission of the VA isn’t to take care of unions, it’s to take care of veterans,” Roe said Thursday in a statement about Arrington’s bill. “This legislation will ensure that the well-being of our heroes is prioritized above all else.”

Other measures targeting official time have been introduced this congressional session. One would forbid any days spent mostly on official time from counting toward an employee’s retirement and another would prevent federal employees from receiving bonuses if they spend more than 80 percent of their time on union activities.

Those measures have received blowback from Democratic lawmakers who said limiting official time could have a negative effect on whistleblowers who turn to their unions.