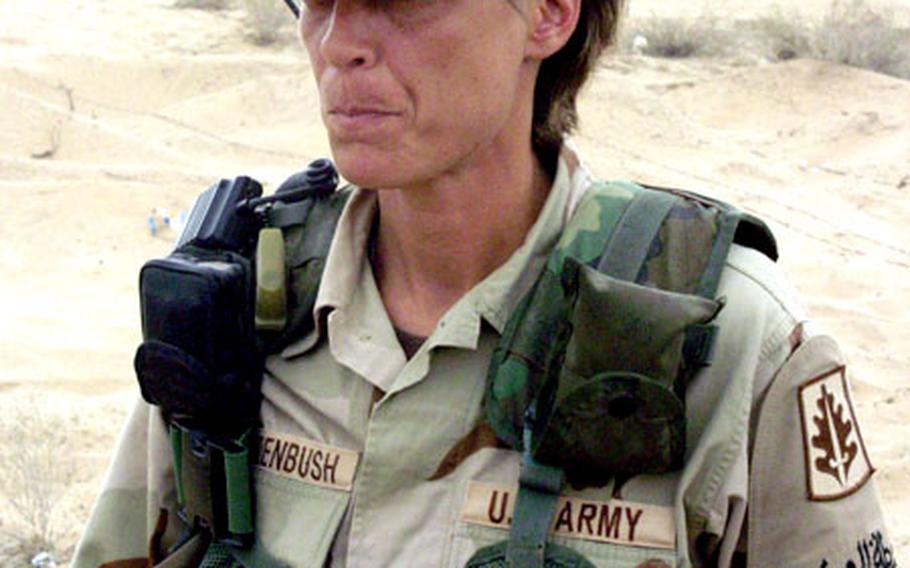 UMM QASR, Iraq &#8212; The U.S. military is ready to open a permanent prisoner of war detainment facility that can hold 16,000 people, but could be expanded to handle nearly 100,000 prisoners, Army officials say.

The prisoners, all men, will soon be transferred to the U.S. camp from Camp Freddy, the adjacent site used by British forces to hold captives, said Army Capt. Lisa Weidenbush, operations officer for the 800th Military Police Brigade. The unit from Uniondale, N.Y., will run the facility.

American forces are building two compounds, each of which can hold 8,000 prisoners, she said, and the military is prepared to build up to 12 compounds.

The 6,000 prisoners now in coalition control will be held in carpeted tents, each of which can hold 10 men, and segregated into quarters for officers, soldiers and people who have not been classified.

A psychological operations unit commander said his soldiers must quell skirmishes at the British-run facility nearly every day.

He said there was a small &#8220;riot&#8221; Saturday when an imprisoned general attempted to convince other soldiers to go on a hunger strike, said Army Maj. Joel Droba, commander of Company B of the 13th Psychological Operations Battalion.

The rioting soldiers, who were separated by military police from the 800th MP Brigade, were throwing rocks and water bottles filled with sand at each other, Droba said. &#8220;It can get pretty wild,&#8221; he said.

However, Lt. Col. Roy Shere, an Army spokesman, said there have been no suicide attempts, hunger strikes or any uprisings.

The prisoner of war compound, in southern Iraq near the port town of Umm Qasr, will become the primary POW facility in Iraq with captives coming from all over the country, Weidenbush said.

When prisoners arrive, they will receive a hot meal and toiletry kit and undergo a medical evaluation, Weidenbush said.

Shere said some people are later released because they had surrendered but weren&#8217;t military personnel. He did not have any figures on the number of people released, but did say they were taken by military personnel to their hometowns.

However, British army Maj. David Christie of legal services said about 6 percent of the people who have been to the compound are later determined to be civilians and released.

He suggested many noncombatants were detained because they waved white flags, but failed to realize that signal is used by soldiers, not civilians.

On Sunday, hundreds of men and women gathered in front of rows of razor wire outside the camp hoping to learn if any of their family members were being held.

He said in most cases military officials do not release names of those in the compound and, instead, work through the Red Cross, which visits the camp several times a week. Those names could be useful to terrorists, he said.

The prisoners are allowed religious services, and the direction of Mecca, necessary for Muslim prayer, is indicated in the camp, she said.

&#8220;Many of these people are probably better treated than if they were still in the army,&#8221; Weidenbush said.