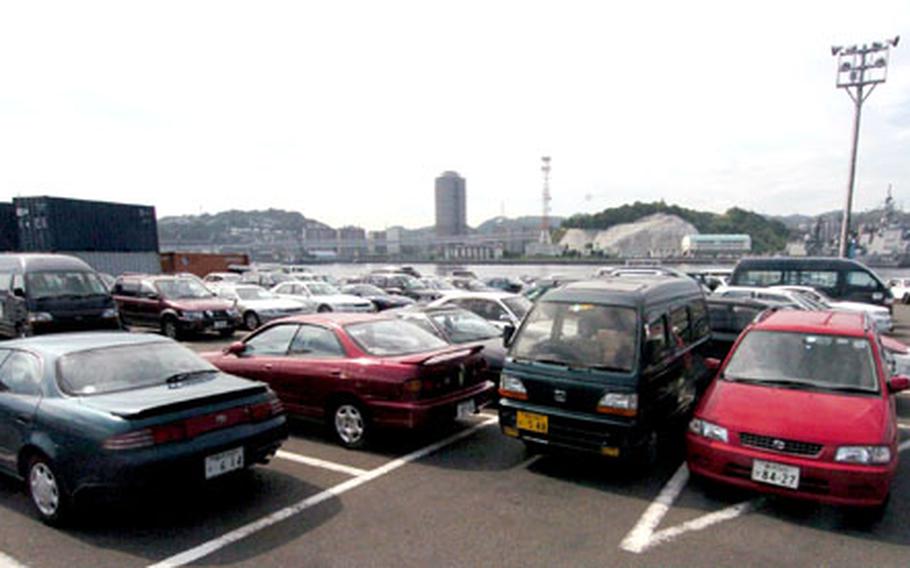 A new, 207-page vehicle policy at Yokosuka Naval Base Yokosuka, Japan, is meant to limit cars and open up parking on the crowded base. Yokosuka&#39;s new traffic policy opens up much of the parking areas near the waterfront to "first-come, first-serve," according to the base&#39;s safety director. Previously, much of this parking was reserved for base workers. (Christopher B. Stoltz / S&S)

The changes come as leaders at Yokosuka Naval Base try to balance safety and space with the 27,000 vehicles registered at the base, according to safety director Lucky Hawkins.

He said the last time he left base during afternoon rush hour to measure the traffic flow, it took him about 20 minutes to get outside the gate.

On average, two accidents are reported a day, Hawkins said, a rate that has declined slightly in recent years.

In 2004, the base recorded 804 accidents &#8212; everything from fender benders to crashes with injuries, Hawkins said. This year, the base is projecting about 750 accidents. As of Sept. 15, 529 accidents were reported, he said.

The comprehensive, 207-page vehicle policy also was created for incoming personnel assigned to the USS George Washington, the aircraft carrier expected to replace the USS Kitty Hawk next year.

Previously, the traffic rules were scattered in six different documents, Hawkins said. The new version gives the carrier crew a comprehensive list of do&#8217;s and don&#8217;ts.

The new version covers cars, motorcycles, bicycles and skateboards, and it addresses everything from vehicle registration procedures to drunken driving punishments.

The policy applies to all status of forces agreement personnel, non-SOFA personnel and Japanese Maritime Self-Defense Forces on base. Although Yokosuka officials cannot revoke a Japanese person&#8217;s driving license, they can rescind driving access on base, Hawkins said.

Some of the more prominent changes affect lower-ranking incoming sailors and base contractors or units with non-SOFA workers.

To combat the space crunch, Hawkins said all sailors ranked E-4 and lower will be prohibited from having a personal vehicle on base. Previously, about 10 percent of E-4s were allowed to have cars in return for good performance and behavior, Hawkins said.

Those lower-ranking sailors who already have cars can continue to drive, Hawkins said. But they will lose that privilege if they sell or transfer the car title.

Similarly, only half of the non-SOFA workers &#8212; usually people hired locally &#8212; in each unit or company will be granted on-base vehicle decals, the policy reads.

The policy also jeopardizes driving privileges for government contracting companies based on the actions of a handful of drivers. If a government contractor is punished with points for a driving incident, those points will count on the individual&#8217;s and the company&#8217;s records, Hawkins said.

&#8220;For example, if two separate employees receive six points each in a consecutive 12-month period, the company&#8217;s on-base driving privileges will be suspended or revoked for all drivers,&#8221; the policy reads. The same holds true for on-base taxi companies.

Traffic judges will continue to have authority to reduce punishments in individual cases, Hawkins said. But now, judges must explain that reduction in writing.

Some of the changes under the new, 207-page vehicle code include:

More accountability for contracting companies when their workers break driving rules.Fewer assigned parking spaces for high-ranking sailors in small units.No assigned parking areas such as &#8220;military only&#8221; or &#8220;MLC only,&#8221; referring to master of labor contract workers, usually Japanese workers.Incorporate off-base, Japanese traffic infractions into on-base driving records.Require on-base traffic judges to record in writing any decision made to reduce points or penalties for breaking the rules.The traffic policy relies on a penalty system:

Six points assessed during six months results in an advisory letter.Seven to 11 points in six months requires a mandatory attendance at remedial driver training.12 points within one year or 18 points within two years results in revocation of driving privileges for at least one year.Where to go to read the policy:http://www.cfay.navy.mil/safety.htm and click on vehicle code