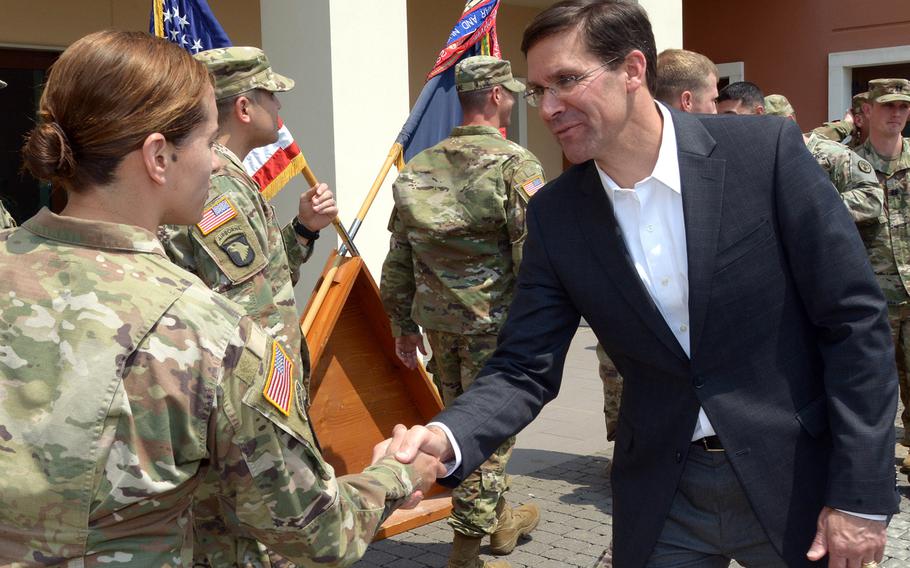 Army Secretary Mark Esper congratulates a soldier assigned to the 173rd Airborne Brigade Combat Team, at the brigade’s headquarters at Caserma Del Din in Vicenza, Italy, June 4, 2019. Esper has been named acting defense secretary by President Donald Trump, and will be heading to Brussels next week for a NATO defense ministers meeting. (Davide Dalla Massara/U.S. Army)

STUTTGART, Germany — Incoming Acting Defense Secretary Mark Esper will head to Europe next week, where he is expected to press allies to increase spending while meeting with NATO defense ministers.

On Tuesday, Pat Shanahan resigned as acting defense chief amid reports that disclosed episodes of domestic violence within his family during his time as a Boeing executive. President Donald Trump soon after named Esper, who was Army secretary, to the acting defense secretary role that he will formally assume Monday.

Esper will then travel to Brussels, where NATO leaders are gathering Wednesday for two days of security talks.

“The focus of his meetings will be reinforcing the U.S. commitment to strengthening the NATO alliance, ensuring more equitable burden sharing, bolstering NATO readiness and addressing regional security issues,” the Pentagon said in a statement Wednesday.

Esper, who served as an executive at Raytheon before serving as Army secretary, also graduated from West Point and served more than 10 years on active duty. He fought in the Gulf War and later served in the Army Reserve.

When he arrives in Brussels, he will face a NATO alliance that has been under strain during the past two years amid frequent criticisms from the White House. Trump has pressured NATO members to ramp up their spending and the defense secretary’s task has been to bring that message to Brussels.

Former Defense Secretary Jim Mattis, in his first NATO meeting in 2017, put allies on notice when he said Washington could “moderate its commitment” if members didn’t begin carrying a larger share of the security burden in Europe.

He continued to pressure allies during his tenure, but his emphasis on the value of NATO and alliances more broadly made Mattis a reassuring figure during his stops in Brussels.

How long Esper will remain in his present role is uncertain. Trump has said he is leaning toward nominating Esper for the permanent defense secretary role, but nothing has been finalized.