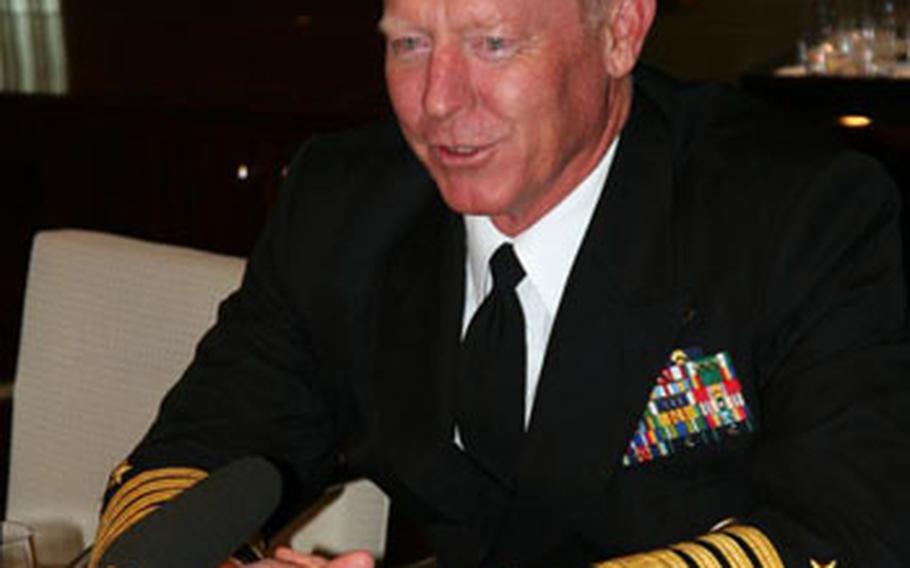 Buy Photo
Adm. Robert Willard, the new Pacific Command chief, said one of his primary missions will be to expand U.S. relations with China. “The more that we can engage collectively as a region with China and understand their intentions and develop relationships with them, I think, the better,” he said during a visit to Seoul, South Korea. He later added: “China is not our enemy.” (Kevin Baron/Stars and Stripes)

SEOUL &#8212; The U.S. admiral who took command of American forces across the Pacific region this week said that his biggest concern over China is &#8220;the uncertainty with regard to the military power that they&#8217;ve developed over the past year,&#8221; which he said has been developed &#8220;at an unprecedented rate.&#8221;

Adm. Robert Willard has been Pacific Command chief only since Monday, but he laid out an ambitious series of challenges facing him for the next two years, stretching from India&#8217;s regional strength to North Korean unpredictability.

&#8220;I would contend that in the past decade or so China has exceeded most of our intelligence estimates of their military capability and capacity every year,&#8221; he said Wednesday.

As a result, Willard is directing PACOM to spearhead U.S. attempts to reopen military-to-military relations with China&#8217;s uniformed servicemembers and America&#8217;s regional allies. He will have a chance to ask China&#8217;s second-highest ranking officer about their build-up soon, when Gen. Xu Caihou visits PACOM headquarters in Hawaii in a little more than a week.

&#8220;The more that we can engage collectively as a region with China and understand their intentions and develop relationships with them, I think, the better,&#8221; he said, later adding, &#8220;China is not our enemy.&#8221;

The U.S. is just beginning to re-engage in military talks with China under President Barack Obama&#8217;s administration, an effort that began earlier this year when Chief of Naval Operations Adm. Gary Roughead visited a fleet review in China. Next week, Defense Secretary Robert Gates&#8217; Chinese counterpart, Xu, will visit the Pentagon and several U.S. military bases more than two years after Gates&#8217; last Beijing visit. And in November, Obama is scheduled to visit with leaders China and several other Asian countries in the region.

&#8220;At the same time, our young sailors at sea need to come in contact, I think, with [Chinese] navy ships, or in their international forums with [People&#8217;s Liberation Army] representatives and to be able to engage with them,&#8221; he said.

In one nascent example under way, Willard said that a fleet commander is seeking to begin sharing small-scale tactical maneuvers with Chinese navy, such as how passing ships should communicate to with other.

Another of Willard&#8217;s top priorities for the command is the unpredictable regime of Kim Jong Il, which the admiral said he considers a global threat beyond the Korean Peninsula as it continues attempting to sell nuclear-related materials abroad.

Willard also picks up ongoing U.S. efforts to move Asian-Pacific countries into forging more multilateral agreements that would take the region beyond the &#8220;hub and spoke&#8221; system of bilateral relationships with the U.S..

The admiral spoke for about half an hour with the Washington press corps traveling with Defense Secretary Robert Gates at a hotel in Seoul, South Korea. The former Pacific Fleet commander said he enters his new job knowing it will require greater strategic leadership.