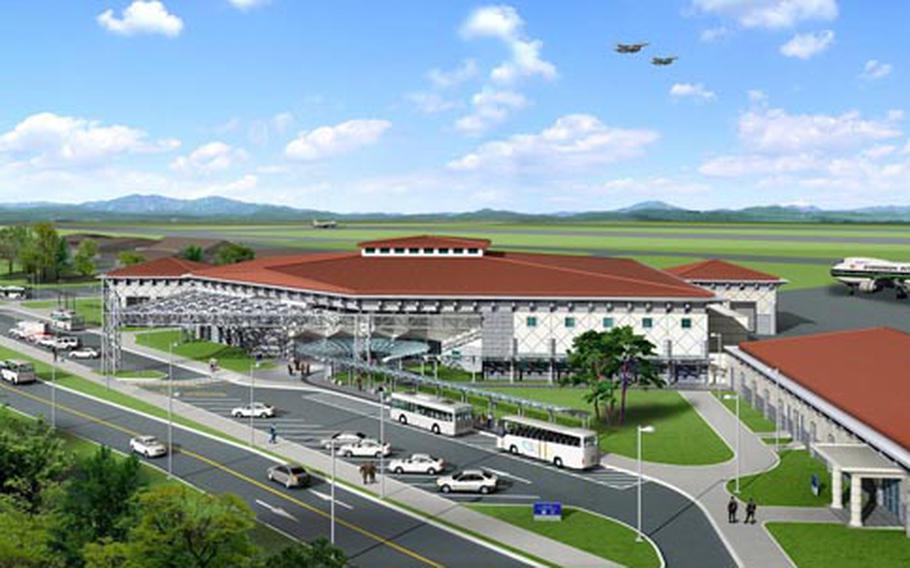 OSAN AIR BASE, South Korea &#8212; A new air passenger terminal scheduled to open this summer at Osan will be more than five times bigger than the one in use now and will have many new passenger conveniences, officials said.

The new terminal is to open in late June and is part of an $18.6 million project that will include an enlarged parking ramp so jets can pull up to the terminal, a waiting area for buses and a one-story cargo building for use by the South Korean air force.

A new and bigger terminal is key for the U.S. military in South Korea because Osan will be the hub for most U.S. servicemembers and their families flying to or from Korea duty, officials said. The peninsula will see growing numbers of military family members as the U.S. military moves ahead with "tour normalization" in which troops serve tours that are longer than in the past and are accompanied by their families.

Increased passenger traffic will start next month when the Defense Department resumes chartered Patriot Express flights to and from South Korea. The flights stopped in 2005, mainly as a cost-saving move. Troops have since been routed through commercial Incheon International Airport.

"The new one has plenty of room for servicemembers and their families and their bags," Penny said. "Plenty of places to walk around. So just the space alone is going to make a huge difference."

Passengers now have to walk the equivalent of a block or two from their plane to the terminal.

There also will be a parking area for buses that will drive new arrivals to their duty stations elsewhere in South Korea. The existing terminal has only a bus drop-off point, and most new arrivals have had to take on-base taxis to get from the terminal area.

The new terminal will have a waiting area for up to 800 passengers, an Internet kiosk, a family waiting room, a VIP suite and a bus ticket sales window, among other amenities, and will measure 81,200 square feet.

The passenger reception area can be converted quickly to an in-processing station for U.S. troops during wartime or other crises, he said.

"There would be thousands of people coming into Korea if a contingency did kick off, and this would be one of the main areas where we would receive all of those personnel and then pass them off to whatever base they&#8217;re going to," Wallace said.

The terminal will have a pressurized sterile lounge area in which inbound and outbound troops can be shielded from the effects of chemical attack, he said.