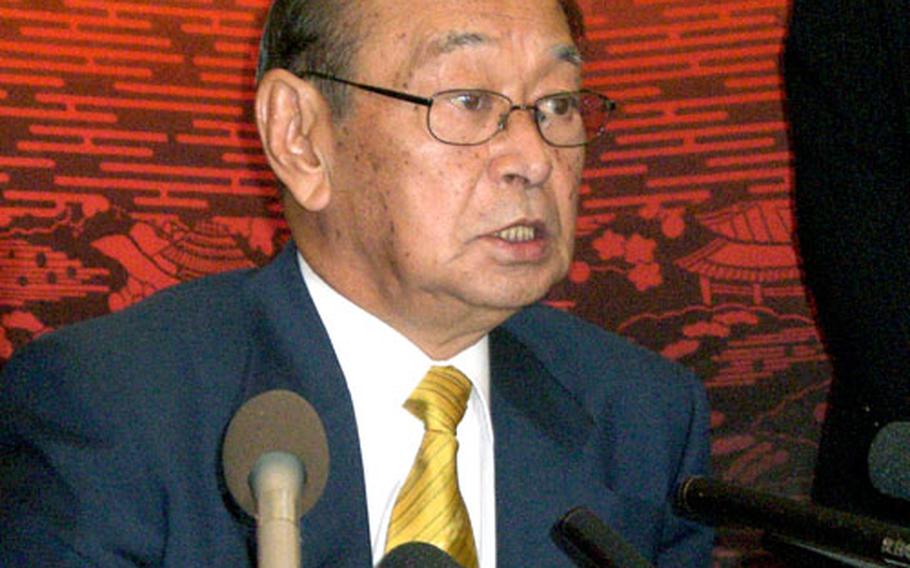 During his first press conference since taking office Sunday, Gov. Hirokazu Nakaima said he will seek to halt most aircraft activity at the controversial air station within the next three years.

He said his primary goal is &#8220;to remove the danger that the air operations poses to the local community.&#8221;

In August 2004, a Marine helicopter crashed on the campus of Okinawa International University, located adjacent to the base. No one was killed, but helicopter parts damaged the school&#8217;s administration building and several homes and other property in the surrounding neighborhood.

In a broad plan to realign U.S. troops in Japan, the U.S. and Japan agreed last May to replace MCAS Futenma with a new facility on Camp Schwab. The air station is to be finished by 2014. At that point MCAS Futenma would be closed, as would Camp Kinser, the Naha Military Port, Camp Lester and part of Camp Foster. Also, some 8,000 Marines and their families would be moved to Guam.

However, Nakaima is insisting on some sort of short-term relief for the citizens of Ginowan, where Futenma is located. He is pushing for a visible change in MCAS Futenma flight operations within three years.

Nakaima has consistently stated that although he opposes some elements of the present plan to move Marine flight operations to a new facility on Camp Schwab, he remains &#8220;flexible&#8221; and willing to negotiate changes with Tokyo.

However, he said he is taking into account the desires of the people of northern Okinawa, where the mayor of Nago, where Camp Schwab is located, and other area officials have accepted the plan.