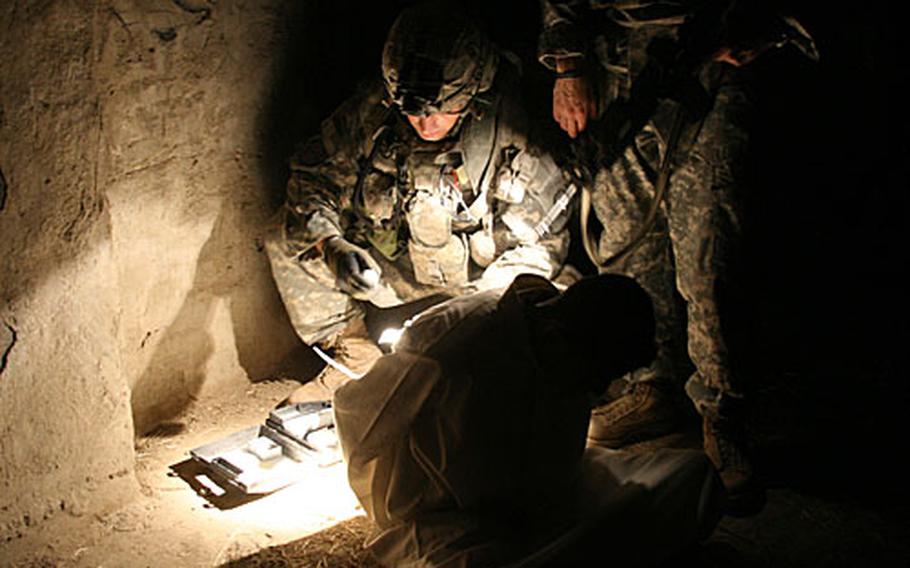 Spc. John Kahn, 26, of Lumberton, N.C. and another soldier test a teenage boy detained in the raid for explosives residue. The boy tested positive along with two other teenagers. They were taken away for further questioning. (Drew Brown / S&S)

Spc. John Kahn, 26, of Lumberton, N.C. and another soldier test a teenage boy detained in the raid for explosives residue. The boy tested positive along with two other teenagers. They were taken away for further questioning. (Drew Brown / S&S) 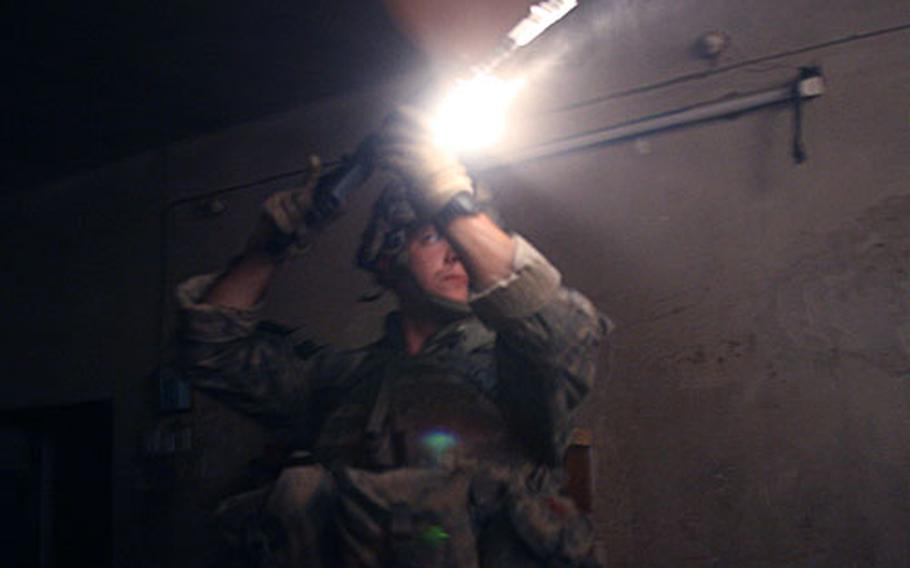 Spc. Jory Miller, 21, of Winona, Texas, aims a flashlight mounted on his M-4 rifle so that another soldier can see as he searches through a wardrobe in the suspected cell leaderâ€™s house. (Drew Brown / S&S) 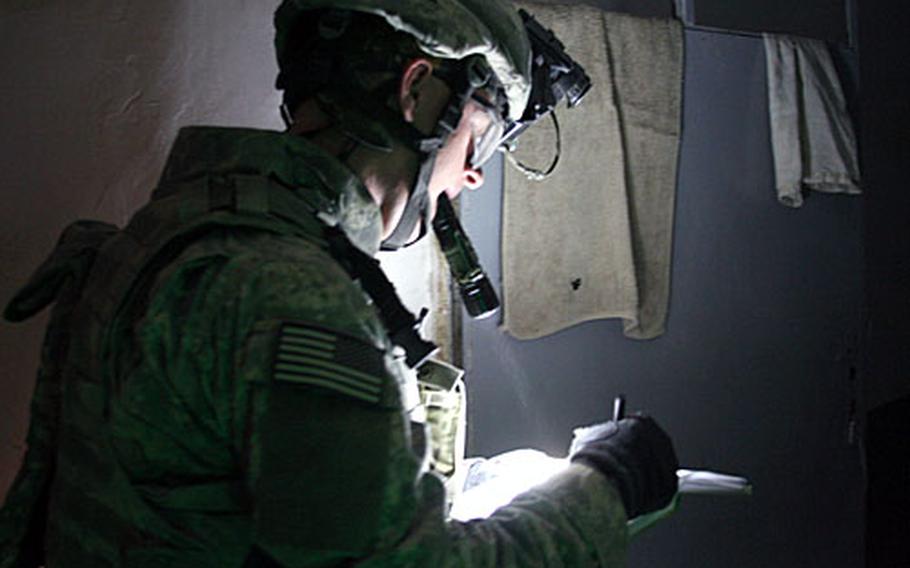 Spc. Robert Zadoyko, 21, of Pottstown, Pa, takes photos and makes sketches of the interior of a house belonging to a suspected Sunni insurgent cell leader south of Baghdad during a raid. U.S. military officers say that the suspected cell leader frequently uses the sprawling compound to meet with other al Qaida members to plan attacks on U.S. forces. ()

U.S. forces have launched another offensive south of Baghdad aimed at cutting off the flow of insurgents and bomb-making materials into the Iraqi capital.

Operation Marne Husky, which began late Wednesday with an air assault raid on an isolated farm in the Tigris River Valley about 20 miles south of Baghdad, is the third offensive launched by Task Force Marne in the region since June, and is part of a broad push the U.S. military announced Monday targeting Sunni and Shiite extremist cells across Iraq.

With top U.S. commander Gen. David Petraeus set to deliver a long-awaited report on the results of the troop surge next month, U.S. commanders here are keen to show that the eight-month buildup has produced results.

But unlike other recent offensives, Operation Marne Husky appears to be more modest in scale. U.S. officers say it is not designed to hold ground or establish a long-term presence further south along the Tigris. Instead, it will consist of a series of raids on specific &#8220;high-value&#8221; targets and airstrikes against known and suspected insurgent activity.

&#8220;Obviously, if we can take away the [leaders], there will be fewer organized insurgent forces going into Baghdad,&#8221; said Lt. Col. Robert Wilson, executive officer for 3rd Combat Aviation Brigade, which is leading the operation.

The air assault, which began shortly after 11 p.m. Wednesday, targeted a suspected Sunni insurgent leader who U.S. military officers said was responsible for organizing and funding a number of attacks, including some involving anti-aircraft fire on U.S. aircraft.

About 60 ground troops from Company B, 3rd Battalion, 509th Infantry carried out the raid under a moonless sky after being airlifted by helicopter to a dirt field about 300 meters from the compound. The company is part of the 25th Infantry Division&#8217;s 4th Brigade, assigned to Task Force Marne.

According to U.S. officers, the compound had been used frequently as an al-Qaida meeting place and safe house. Intelligence also suggested that as many as 15 to 20 people could be present at the time of the raid, including an unknown number of women and children.

There was no hostile fire. In an effort to disorient any would-be attackers, Apache gunships destroyed a suspected bomb-laden car several minutes after the raid began. Throughout the raid, Hellfire missiles streaked through the sky, artillery exploded in nearby fields and 20 mm machine gun fire from the circling Apaches split the night.

Within minutes of landing, an advance fire team already had swept through most of the compound and two adjacent houses, separating the men from the women and children.

As one group of soldiers combed from room to room through the sprawling one-story structure, another group interrogated the men, while two other soldiers used a hand-held metal detector to screen the women and children.

The total count of people on the site was much larger than expected: five men, three of them teenage boys, plus 53 women and children.

A workshop a short walk from the main house appeared to be a likely spot for the manufacture of homemade bombs, but a search by an explosives-sniffing dog and an explosives ordnance disposal team turned up nothing unusual.

Still, Nylander said he would take no chances.

&#8220;When we leave here, this building will cease to exist,&#8221; he said, calling on his radio for Apache gunships to destroy the structure once the raid was over.

Back at the compound, Spc. Jon Khan, 26, of Lumberton, N.C., and Capt. Dave Coulombe tested each male to see if they had explosives residue on their hands. The three teenage boys came up positive. They would be detained and taken for further interrogation. Two older men were released.

All five would have their names and mugshots entered into a database that U.S. forces have built in an attempt to map the network of various insurgent groups.

But the target of the raid was not among them. His whereabouts were unclear. Some of the men said he had been there earlier that night, but had left with his wife to go to Baghdad. Another said he&#8217;d left for Baghdad a week earlier.

By 1:30 a.m., the raid was over. Even though the troops had missed their main target, Nylander said he considered the raid a success.