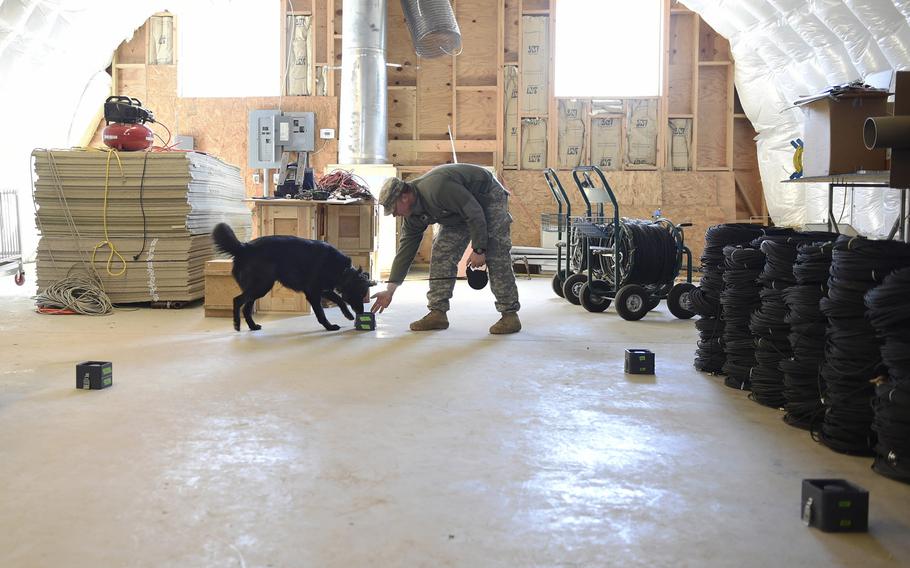 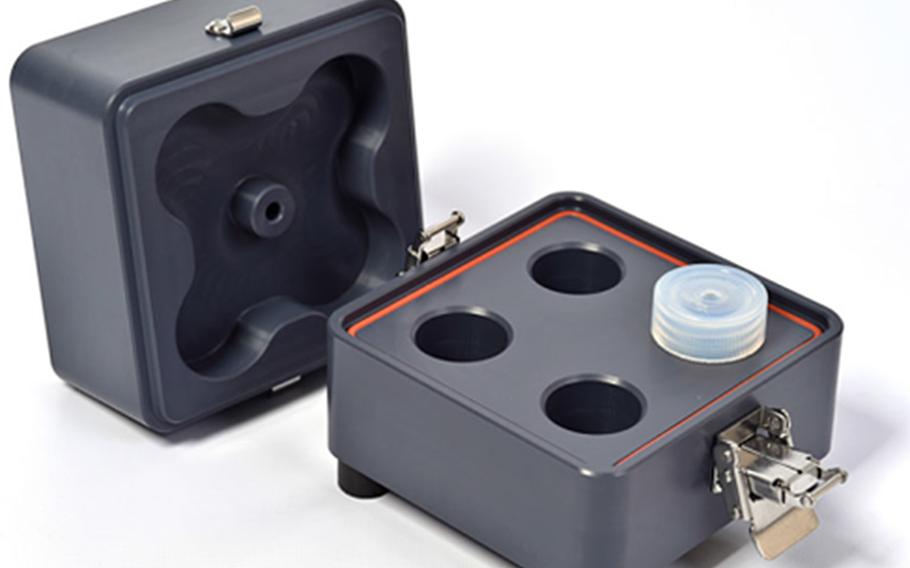 The Mixed Odor Detection Device can safely combine all the volatile chemicals of an explosive in one box to better simulate an explosive's odors to dogs. () 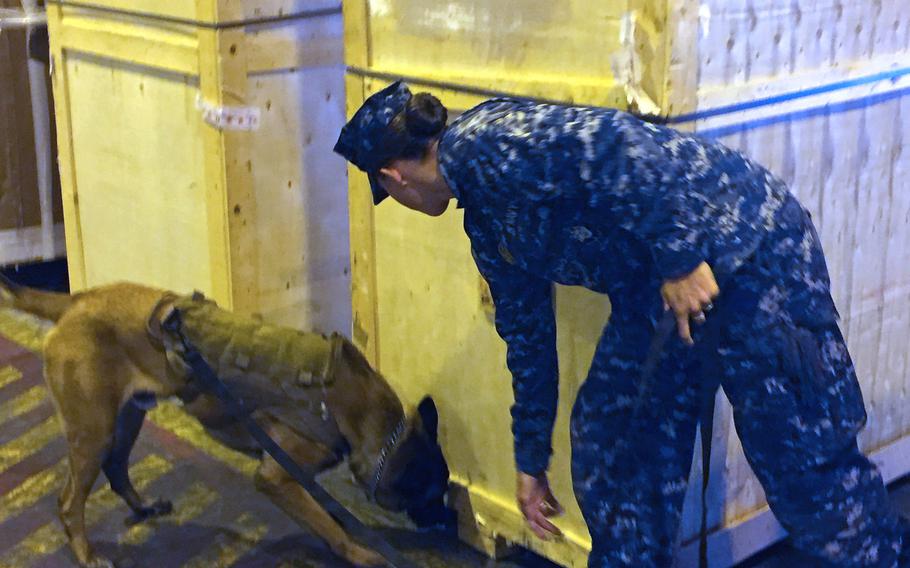 Buy Photo
Petty Officer 3rd Class Hannah Asbargen handles VVixen as she sniffs for a simulated explosive containing potassium chlorate on Aug. 2, 2017, at a U.S. Navy base warehouse in Naples, Italy. A new training device will safely hold multiple chemicals to better simulate how a real bomb smells to a dog. (Scott Wyland/Stars and Stripes)

A bomb-sniffing dog trains by sniffing individual chemicals within an explosive but isn’t likely to get a whiff of a complete device until coming across the real thing.

Current training on homemade explosives, which typically use readily available commercial products, is limited because while each chemical is inert and safe, they can become dangerous when mixed.

Trainers say it’s like teaching dogs to identify a cheeseburger by smelling a meat patty, followed by cheese and then a bun, rather than the whole thing at once.

However, a new device developed by the U.S. Naval Research Laboratory safely combines all the volatile chemicals in a small box. The device exposes dogs to the mixed odors, so that what they’re exposed to better mimics a homemade bomb.

Chemicals are placed into separate vials and kept apart within the box. The odors mingle in a central tube and emanate enough for a dog to smell. Known as the Mixed Odor Delivery Device, it will become available to military canine units in September.

Members of the U.S. Navy’s canine unit in Naples, Italy, said the device seems promising, but they won’t know how effective it is until they test it on their six dogs.

“I’d like to see their reactions when encountering it,” said Chief Petty Officer Susan Collins, kennel master for the unit, which aids police and security teams in sweeps and occasionally has a handler and dog deploy to a war zone.

Allowing dogs to smell an explosive’s entire chemical composition seems a more realistic simulation, Collins said. Still, a device may not work equally well on all dogs, she added.

“Each dog is unique in how they sniff and develop and become efficient,” Collins said.

Petty Officer 2nd Class Travis Kruciak, a dog handler at the unit, said he is open to anything that helps them and the dogs do their jobs better. It should also streamline how they handle and track chemicals, which now must be done one chemical at a time, he said.

The device comes with adjustable plugs and perforated caps that allow handlers to vary the intensity of the odors and create different bomb scenarios for dogs. It gives handlers a clearer idea of what they are training dogs to sniff out.

“If you understand the odor that is coming off that training aid, you have a better chance of hitting that target in real life,” said Lauryn DeGreeff, the Navy chemist who invented the device, in an instructional video.

Collins said she likes the odor-adjusting feature because you can vary the compounds the way real explosives vary. She looks forward to trying the device.