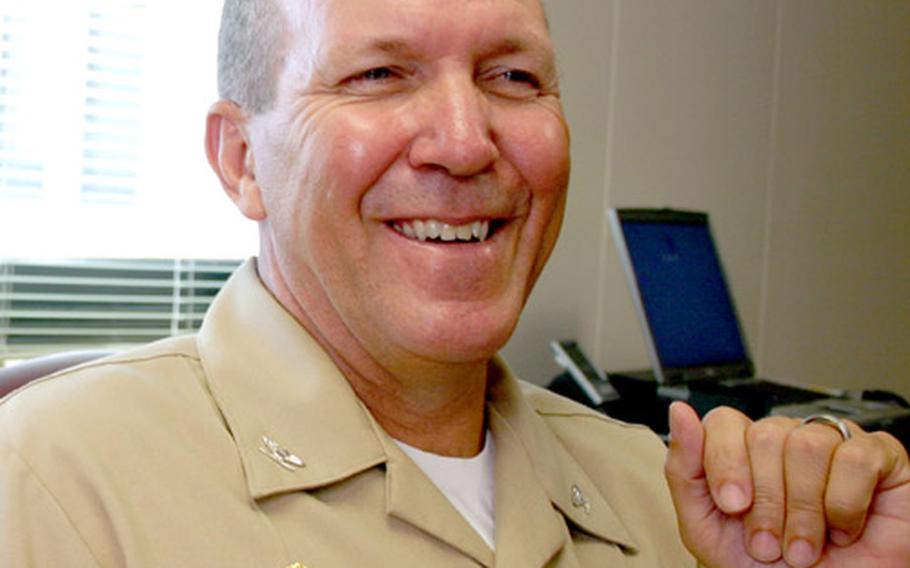 NAPLES, Italy &#8212; When Navy Capt. G.L. &#8220;Floyd&#8221; Hehe took over command of Naval Support Activity Naples, he inherited a base going through growing pains, a controversial ban on dogs in base housing and labor disputes with local national employees.

Nevertheless, he&#8217;s looking forward to his next three years, he said during an interview Friday.

Hehe took command of NSA Naples in mid-June from Capt. Dave Frederick after a tour as operations officer of the USS George Washington carrier strike group.

Hehe, a self-professed dog lover, said he will keep in place the former commander&#8217;s ban, saying the base and its housing simply are not conducive to canines.

Nor do the 12-unit apartment buildings, which aren&#8217;t very soundproof.

&#8220;There isn&#8217;t any quality space for dog owners to exercise their dogs and allow their dogs to get outside to expend the energy they need to,&#8221; Woolverton said. &#8220;All of the area there is set aside for either basic traffic or for people recreation, not dog recreation, and you can&#8217;t safely mix the two.&#8221;

Hehe made a one-time exception to allow Capt. Kathleen O&#8217;Farrell, the base hospital commander, to keep her dog on base because she was forced to leave her off-base housing when the Navy did not renew the lease. She has eight months left on her tour in Naples.

In an effort to trim costs, the Navy built flag- and senior-officer quarters on base, and reduced off-base property leases from 10 homes to six. Two more leases will not be renewed next year, he said.

Unlike Frederick, who lived off base in Pozzuoli, Hehe lives on the support site at Gricignano.

When he assumed command, he also inherited labor disputes between local nationals who have staged a few strikes to draw attention to their concerns.

Hehe has served at various shore and sea commands, including a tour as commander of the Carrier Airborne Early Warning Squadron 123 &#8220;Screwtops.&#8221; He received his commission through the Aviation Officer Candidate School in April 1982 and earned his wings 17 months later.

For years, he thought his name was of American Indian origin, and learned only after an uncle did a genealogy search that it&#8217;s German. As far as he knows, it doesn&#8217;t mean anything in German.