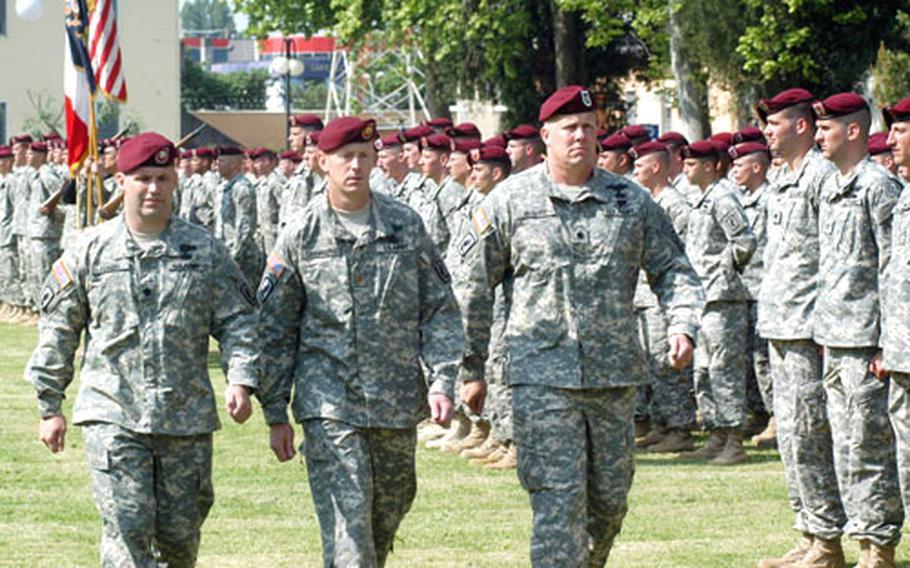 Thanks to Army transformation, the 1st Battalion, 508th Infantry Regiment is now only a part of the 173rd Airborne Brigade and the Southern European Task Force (Airborne) in the history books.

That unit&#8217;s soldiers will join the 2nd Battalion, 503rd Infantry Regiment in Vicenza, and the 1-508 unit designation will become part of the 82nd Airborne Division as it transforms its brigades into Army Units of Action.

The move really affects only the patches, signs and guidons. There wasn&#8217;t a mass swapping of troops between Vicenza and Fort Bragg, N.C., or anywhere else. The servicemembers out on the parade field might have been wearing the service&#8217;s new Army Combat Uniforms, but they were the same 173rd Airborne Brigade and Southern European Task Force (Airborne) soldiers who recently returned from a year in Afghanistan.

So why make the move?

Brigade commander Col. Kevin Owens &#8212; and his successors &#8212; will be heavily involved transforming the brigade into a Unit of Action over the next several years. In addition to the two 503rd battalions, the brigade should have two other battalions.

Tuesday also marked an occasion for Owens to say goodbye to one of his commanders and welcome in a new one. In his remarks, he spoke to the officers&#8217; mothers, who were in attendance.

Tim McGuire, at 6-feet, 3 inches and solidly built, stands out in a crowd not only because of his stature, but his personality. Taking over the battalion while it was in Iraq, he also led it through its mission in Afghanistan. He was a vocal proponent for the national elections and progress in the province of Paktika.

Fenzel, though smaller in stature, shouldn&#8217;t have trouble fitting in with his new command. He&#8217;s far from new to Vicenza. In fact, the newly designated 1-503 is one of the few larger units on base in which he hasn&#8217;t yet served.