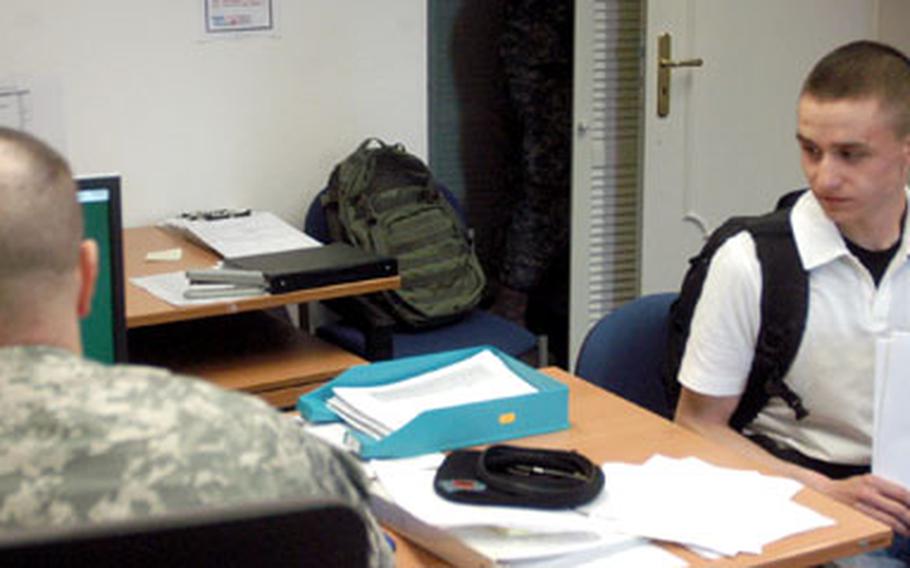 Pvt. Dustin Hoffman, 18, of Boise, Idaho, checks in Monday with a member of the 64th Replacement Company, which has relocated to the Sheraton Hotel at the Frankfurt International Airport in Germany. On Tuesday, the company that meets and greets inbound soldiers inactivated, taking on a new name: the U.S. Army Europe Soldiers and Family Reception Center. (Kevin Dougherty / S&S)

FRANKFURT, Germany &#8212; Pvt. Dustin Hoffman acted tired, somewhat nervous and a bit awed to be in Europe, even if it was just an airport terminal.

His welcoming committee Monday included members of the 64th Replacement Company, an outfit that has been meeting and greeting inbound soldiers and families at Frankfurt International Airport for more than a generation.

It also happened to be the last full day for the unit, which formally inactivated Tuesday as the Hanau military community prepares to close.

Having recently moved from Hanau to the airport&#8217;s Sheraton Hotel, the group is now called the U.S. Army Europe Soldiers and Family Reception Center.

Some soldiers need it more than others, particularly those new to the service or to Europe. From the luggage carousel to the bus that will take them to their next duty station, the new arrivals are ushered through a series of steps by a member of the liaison team Kidder heads up.

Unlike before, the primary emphasis is to get as many soldiers and family members as possible to their final destination on the day they arrive. Up until this month, soldiers were bused from the airport to Pioneer Casern in Hanau, where they often missed the shuttle bus and had to be billeted for the night.

There are 41 flights a day from the United States to Frankfurt that Kidder and his charges have to monitor. The first plane arrives at 5:30 a.m. The last pulls in at 1:30 p.m., though weather and air traffic can wreak havoc with flight schedules.

On an average day, the unit sees about 40 soldiers come through the airport.

Before the reorganization, a fair amount of the unit&#8217;s resources went into billeting operations, since soldiers frequently missed the shuttle that would carry them to their new post.

Now the focus is more on trying to get them to their final destination, which will require far fewer soldiers. A year ago, there were 56 soldiers assigned to the unit. In the coming months, the center will have a staff of nine soldiers and 17 civilians.

That certainly was the case with Hoffman, who a year ago was a senior at Emmett High School in Boise. Today he is a signal support specialist.